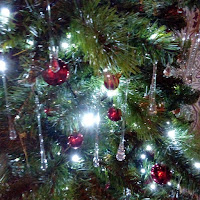 It is that time of year when, amid the bustle of Yule planning, we often pause to take stock of our lives; especially in the days leading up to the end of the year when many of us make resolutions for the coming twelve months.

Those of us who embark on these plans do so with every intention of achieving something important to ourselves or to those around us. It might be losing weight or writing that best seller or beating that illness, or perhaps getting (or keeping) that job.
Few people set them with the certain knowledge they will fail. Yes, we all have that sneaking suspicion that we may be reaching a little far, yet we wade in nevertheless in the hope that fortune will be on our side.

Sometimes we set the bar a little lower with the expectation of attaining an achievable goal and in my experience they are the ones that get broken the fastest. Possibly because they are frivolous, more often because they were never serious objectives in the first place. I recall some years ago telling myself that ‘I shall never eat cake again!’  That one lasted until 2nd January. Doomed to failure by the temptations of a giant Christmas cake! (Well... It would be such a waste of resources to have seen it go to waste...)

Last year my somewhat nebulous resolution was ‘to be more successful as a writer’.  More by luck than judgement – or should I say due to the judgement of others – 2018  did prove to be a good year in many respects. The big news of course, was being awarded the Arnold Bennett Book Prize for my crime novel Winter Downs. I also gained a Highly Commended in the Potteries Prize for Flash Fiction for 'Count Down to Nothing.'

I am proud of those achievements and grateful to the various panels of judges for bestowing honours.

On the downside I have let the writing itself slide somewhat.  2018 did see my novella A Small Thing For Yolanda finally appear in the anthology Into the Night Eternal. I had also intended to have In Her Defence, the follow up to Winter Downs, out in the autumn. But for various reasons, though it was written, those inevitable delays meant that it had to be held over. So that for those of you eager to hear more about Courtney and Wright? In Her Defence : Bunch Courtney Investigation 2 will be available on 4th April 2019. The Way You Were : Bunch Courtney Investigation 3, is already under way and with luck will arrive in the autumn 2019.

That timetable has given me my resolution for 2019 and one that is rather more succinct than 2018; to get my rear-end into gear and write rather faster than I did in the previous twelve months!

Find out more about Jan's work on her blog page.

Bill Kirton said…
Congratulations on the successes, Jan. I never fail to achieve my resolutions because I never make any. I'm with Browning:
'Ah, but a man's reach should exceed his grasp' (And I'm sure he meant a woman's too.)
19 December 2018 at 13:27