By Leverett Butts - September 23, 2018
As you know, I'm taking a few months to discuss the best self-published books I've come across. When I started this project, I was afraid that I would be forced to look at only or mostly fantasy and science fiction due to my process of relying on advertisements on social media to find self-published works (as I've mentioned before, one of the hardest things about selling self-published books is that it is incredibly hard to get people to find your work). A few weeks ago, however, I found out that my office neighbor had literally just self-published his first novel, so I asked to read it.

My first joy was to discover that it was not a fantasy or science fiction novel. My second, was discovering that it was perfect for me to review for this blog series. 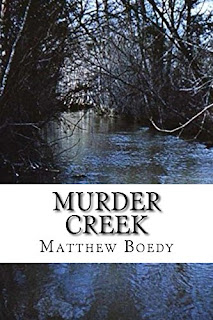 Set in the late 1990's, Boedy's novel tells the story of Wayne Michael Mathis, soon to be the last man to die in Georgia's electric chair, and his quest to find redemption and to end the "curse" of Murder Creek, beside which his family has lived for generations dating back to before the American Revolution. Mathis has grown up with tales of the evil in his family's blood causing each generation to commit horrendous acts of violence, and his deepest desire is to prevent the curse from affecting his own son, whom he has never met.

In Boedy's hands, this narrative becomes more than just a tale of guilt and redemption, however. The creek itself becomes almost another character, a combination of antagonist and savior, for while it is the site of two centuries of bloody killings, it is also the site of innumerable baptisms, and Mathis spends a good deal of time torn between the two opposing interpretations of the creek's water as an instrument of both death and salvation.

The novel is not long, just under 130 pages, but Boedy masterfully presents a full and complete history of both the Mathis family and Murder Creek. The time-present story is told on mostly alternating chapters (the pattern is disrupted at the end for reasons that should become obvious). Each of the other chapters tells a story of each successive generation of Mathises and their violent relationship to the creek, spaced fifty years apart, from 1754 through 1954, ending with Wayne's father.

The story is well researched, giving it the feel of a concise James Michener novel or John Jakes historical saga (Think The Kent Family Chronicles writ small). It truly is amazing how Boedy manages to fit that much history and drama into that few pages without his narrative feeling cramped or glossed-over.

I picked up the book, hoping it would be good enough to review for this month's post, and I am happy to say that not only was it good enough, it is one of the best books I have read this year, self or traditionally published. It is an exquisite snapshot not only of the American South, but of the dark and bloody history of America itself. I cannot recommend it highly enough. Just check it out, you will not be disappointed.

Griselda Heppel said…
What a find and what a fascinating premise for a novel. A stroke of luck for your friend that you happen to be doing a project on self-published books, and a bonus for you and your readers that it turns out to be such a gem. I hope it does well - it clearly ought to.
24 September 2018 at 21:02