Not just a Flash in the Pan: Ali Bacon looks at the onward march of 'novella in flash'

It’s a year since In the Blink of an Eye came out and nearly 18 months since I talked here about the changing shape of ‘long form’ fiction, in particular the appearance of novels which, like mine, looked increasingly like collections of linked short stories. In fact right now I’m reading Elizabeth Strout’s Olive Kitteridge, published to acclaim in  2011 and described on the jacket as a ‘novel in stories’ so apparently I didn’t invent this genre after all!

However since then something else has come along. Just as Linen Press and I were doing final edits to In the Blink of an Eye, I noticed a competition run by Ad Hoc fiction for a ‘novella in flash. I could immediately relate to the concept of an overarching narrative composed of stand-alone stories - albeit very short short stories – and even considered the possibility of a ruthless edit in order to enter!

Time did not allow for that, but soon after I read my first ever novella in flash, Three Men on the Edge by Michael Loveday (reviewed here) and later bought a copy of the three shortlisted entries in the Ad Hoc competition, named after the winner, How to Make a Window Snake  which I devoured with gusto. These are an excellent introduction to the different styles this genre can throw up as yo can see from my review on Ad Hoc Fiction.

I suppose up to this point I considered the novella in flash an intriguing prospect but something of a minority interest – i.e. unlikely to make headlines outside a group of aficionados.

But what’s this I see?  The Women’s Prize for Fiction longlist includes Bottled Goods, Sophie van Llewyn’s ambitious and accomplished novella about life in communist . I read it last week and loved it. And yes, it is told in a series of stories (some of them masquerading as lists or instructions) which are definitely flash fictions.

So it looks as if both ‘novels in stories’ and 'novella in flash’ are making it into the world of mainstream writing and reading which I think will delight those readers who give it a go.

Meanwhile I’ve just been alerted to this one by Maria Romasco Moore, ‘Brief, crystalline stories combine with vintage photographs,’ described by the New York Times (no less) as ‘profoundly unsettling in its familiarity’. Flash fiction and photography sounds like a no-brainer for me. And I think we can say novella in flash has come rapidly of age. 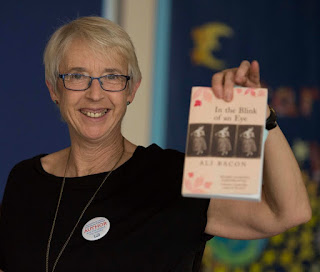 In the Blink of an Eye, Ali Bacon's 'novel-in stories' is available in paperback and e-book from Linen Press, online stores and all good bookshops.

Bill Kirton said…
My first thought on reading this, Ali, was 'Had we but world enough, and time' but you've intrigued me and I'll definitely investigate what sounds like an impossible challenge. Thank you.
22 April 2019 at 11:05

Dipika Mukherjee said…
I LOVE Olve Kitteridge and have no idea why it is not on every canonical list. Love flash fiction too, and have had some success with it. Onwards!
22 April 2019 at 14:02

Umberto Tosi said…
Many of my short stories interconnect - with characters who show up at different stages of their lives, in unrelated narratives, but not by design, and so far, without closing loops. Intrigued, I enjoyed Olive Kitteridge, and I look forward to reading In the Blink of an Eye, which sounds fascinating, independent of its form, but enhanced by it.
22 April 2019 at 18:43

AliB said…
Thanks everyone. I'm enjoying O. K. More and more as it goes on. There's a particular style of American writing (Kent Harulf is another) that really gets to me. I can't say I've reached these dizzy heights but then I suppose 'I did it my way'!
23 April 2019 at 20:25