The Ups and Downs of Wildlife, by Elizabeth Kay

I have frequently plundered my wildlife observations for characters. From The Wind in the Willows to Watership Down, it’s been a staple fare for so many authors as it’s direct observation that informs the writing, rather than second-hand information. That’s the way that errors creep in. Many years ago I was illustrating a natural history book, and one of the items required was a swordfish. Like most people, I imagine, I assumed a swordfish was black on top, and silver beneath. Random house, the publisher, sent me a lot of information from the National Institute of Oceanography at Southampton, and to my surprise I discovered they were copper-coloured. The first books to illustrate fish were printed in black and white, and what happened subsequently was that illustrators relied on these pictures, made assumptions based on other big fish like tuna, and got it wrong. (Actually, even tuna have a yellowish stripe down the side.)

I am fortunate that I live in Leatherhead, where my garden is visited by a variety of birds and there are many opportunities for country walks. A few years ago we even had badgers trotting down the road outside, and we get a lot of foxes. But it’s not all sweetness and light. The natural world has its dramas and tragedies, as well as its triumphs and delights. Two years ago, blue tits nested in our camera box for the first time. All went well to start with. Mr Blue tit fed Mrs Blue tit with choice caterpillars whilst she was incubating the eggs – and then he disappeared. Mrs Blue tit carried on incubating, and when the eggs hatched it was up to her alone to feed them, which she did assiduously for the first week. And then she disappeared as well, round about midday. We watched with growing trepidation as dusk fell, and she didn’t come back. But we’re lucky – we live five minutes away from Wildlife Aid, so I rang them up and they asked us to bring in the entire nest box. They are very experienced, and they raised all the chicks to adulthood in little knitted nests, and then into the aviary. 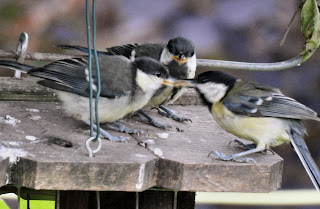 Last year we didn’t even notice that the great tits had set up home in the one nest box without a camera, until I heard the babies tweeting. Both parents stayed the course, but unfortunately we were away on the day the chicks all fledged, although we did see mum feeding them afterwards. This year we had a great tit sleeping in out camera box every night, and popping in from time to time during the day – and then she, too, disappeared. We do have sparrowhawks that occasionally visit, and one of them ate a collared dove beneath the bay tree. We’ve seen a crow kill a starling, as well. 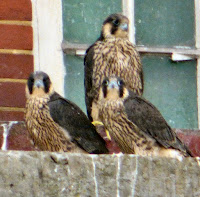 There are amusing episodes, of course. The jackdaws that played volleyball with a fat ball. The long-tailed tit that was convinced its reflection in a door-handle was a rival. The magpie that mischievously tweaked the tail of a feeding crow. The squirrels that regard any new bird feeder as an intelligence test – and usually win. The cleverest incident was when our resident genius, Einstein, realised that he could detach the entire feeder so that it fell on the grass and became accessible by turning it round and round so that it unscrewed itself.
We’ve had some unusual visitors from time to time. Eight years ago we had a flock of waxwings which hung around for a couple of weeks, and this year the redpolls have been back for the first time in ages. We’ve had a pheasant, a heron, blackcaps, two varieties of woodpeckers and ever increasing numbers of ring-necked parakeets. Peregrine falcons have been nesting down the road on an old water tower, but were sadly absent last year. Usually, they raised two chicks, but one year they managed four, which was when we realised that they are the only birds capable of catching parakeets. Fast food! 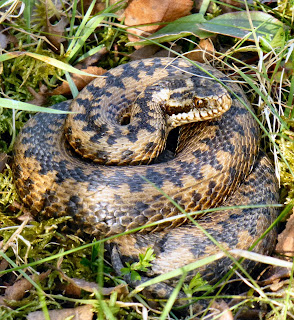 On the common we get rabbits, roe deer, lizards, grass snakes and adders. We’ve been watching the adders for several years, and learning a lot about them. The females seem to be territorial, but the males are harder to spot despite being brighter in colour. We get many frogs in our pond, and a lot of frogspawn every year. And once you start looking at the smaller things, there is a wealth of wildlife at your fingertips. Butterflies – brimstones, red admirals, peacocks, commas. And then there’s the wasp spider, the white crab spider, bush crickets, shield bugs. I could ramble on like this indefinitely. But what are the direct writing benefits I’ve obtained? Inventing the Lesser Spotted Tease after a day’s frustrating birdwatching. Basing a character’s appearance on a heron…
Tansy always reminds me of a stabber-bird, thought Betony, with her long nose and her snaky neck.
In Back to the Divide, there’s a spell which turns living things to marble, and anything that touches one of them turns to marble itself. It occurred to me that the first things to be affected were the little things…
The fly was now solid marble. There were other marble creatures down there, as well. A couple of ants, a mosquito, and a woodlouse. They were strangely beautiful, their tiny bodies white and lustrous.
Even the demanding behaviour of baby birds came in useful when the griffon Thornbeak laid an egg…
Thornbeak was sitting at the edge of the shallow depression in the middle, and watching the egg intently. It wobbled slightly, and a brief staccato of tapping issued from within.
“It’s hatching,” she said softly.
Turpsik had a feeling that a baby brazzle wouldn’t be the most endearing of infants. It would be practically bald, squawk a lot, and peck at anything within range.

Elizabeth Kay said…
I live a quarter of a mile from the M25, too! Yesterday a blue tit started to build a nest in our camera box, arranging the twigs, treading down some moss, and then another blue tit flew into the box and nearly murdered her. It was the most vicious fight I have ever seen. Sadly, she hasn't been back. This has happened before - the intruder doesn't want the box for herself, she's just annihilating the competition. Very sad, as with the amount of food we put out there's enough for everyone.
18 April 2019 at 05:32

Umberto Tosi said…
Thanks for this vivid post. It's evident that your keen eye for details and your love of nature animate your descriptions of animals, and of characters developed from them.
18 April 2019 at 07:15

Susan Price said…
At the moment, we are host to one of the most aggressive male robins I've ever seen. He won't tolerate the sparrows at the feeders (much they care); he has a go at wood pigeons four times his size, he picks on the blackbird -- and he doesn't give a spit for us. Lands right by us and cocks an arrogant snoot.
18 April 2019 at 10:24