Poetry and a rant by Sandra Horn


I’m a little shrinking violet, really. Avoiding conflict at all costs, not showing off (‘drawing attention to yourself’always disapproved of mightily at home), but here goes: I’m going to show off and be controversial, all in the one blog, so there.

First, the showing off. I’ve already Facebooked and Twittered this, but I haven’t finished yet: I have three poems in the current issue of The Blue Nib! Yes! The editor commented, ‘I like these plangent poems and the acute way you deal sensitively with what can often be very clichéd issues.’  Cor blimey! (that’s me, not the Editor). I’m blushing as I write, but only a little bit. 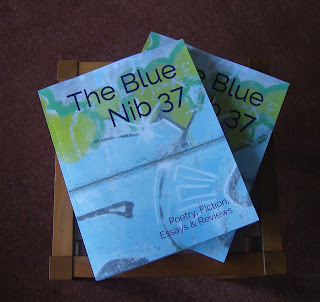 Now the controversy, which is about poetry – or not-poetry and not-art and not-music. William Carlos Williams started it with his note about eating the plums from the fridge. That’s what it is, a note left for his wife telling her that he’d eaten the plums. It’s been anthologised all over the place. Is it a poem? And who am I to question such a famous writer anyway? I’m a reader, that’s who. An avid, hungry consumer of words of all kinds, but poetry in particular. I have a completely crammed book-case, spilling over with poetry books, a tottering pile by my bed. Alice Oswald is coming to a local(ish) venue next month and if I don’t get a ticket I might just explode*. It doesn’t make me an informed critic, I know – I lack the right kind of education – but there is so much joy in the well-crafted work even for those like me. 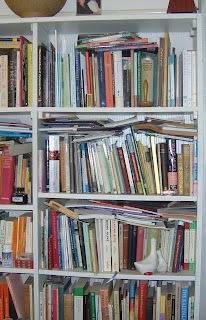 I was encouraged by Shirley Bell’s editorial in The Blue Nib (Woops! Have I mentioned it again?) in which she makes a strong case for poetry that has been ‘edited and honed... and with every line break, comma and full stop earning its place’. She quotes Rebecca Watts,** who, with no holds barred, has slated the ‘cohort of young female poets’ who are being praised for their ‘honesty’ and ‘accessibility’ – ‘buzzwords for the open denigration of intellectual engagement and rejection of the craft that characterises their work.’ Phew! I wonder what she makes of WCW’s plums?

I feel the same kind of thing about minimalist music, but I’ve found myself in the middle of angry arguments about it before now, having written that repeating the same four bars without modulation or development ad vomitum is not music.

It’s not just a question of whether it’s a pleasing noise to me, a lot of Wagner passes me by but I recognise the genius at work. And then there’s ‘art’ – nailing a fried egg to a table (Sarah Lucas) may be fun for the nailer, and in T. Emin’s terms, if the perpetrator calls it art, it is art, but for me it’s cheap lazy rubbish as it was not researched and crafted and honed, just flung together in a few minutes.

Perhaps I’m just a dinosaur, aged and ignorant, banging on about – ‘I don’t know much but I know what I like.’ Yep, that’s probably it.

Bill Kirton said…
Now that you've ranted your full 'but I know what I like' rant (in such a charmingly gentle manner), Sandra, you've created a space for me to slink in alongside you and risk adding 'Hear, hear' to it.
20 April 2019 at 10:59

Umberto Tosi said…
Congratulations, Sandra, on your poems in the Blue Nib and on your fine, public rant! We can't have too many good rants. They clear the air and rouse our spirits!
20 April 2019 at 22:57

Ann Turnbull said…
Just found and printed your poems, Sandra - huge congratulations! You are an inspiration to me. And yes, I support your rant.
21 April 2019 at 17:42

Far from Kenosha, at Door County, Wisconsin: by Dipika Mukherjee

2020 has been a capricious year in so many ways, for all of us. I have continued to teach, hectoring students to keep writing, to find some catharsis in words, but I find myself derailed whenever I try to cultivate any sense of normalcy.Living in the United States at this particular point of time feels so dystopian that I have no words for the parallel universe of my fiction. So when I received a residency from Write On, at Door County, Wisconsin to work on my novel-in-progress, I grabbed the opportunity to travel somewhere, anywhere.
For two weeks, I am the lone writer  in nearly 39 acres of woods, orchards, and meadows. I am a short distance away from the waters of Green Bay and Lake Michigan. Every evening offers a spectacular sunset over waters that calm the soul; there is also the occasional deer, lots of chattering birds and humming wasps and bees, and one harmless garter snake I startled during an evening walk. There are no people.
This feels like paradise. An anonymous gift of …
Read more

I wrote a similar piece some years back, so I’m plagiarizing my own work with this article.
If you guessed that I’m writing about the overuse of the exclamation mark again—you are correct!!!
The Internet has made communicating so easy there is a tendency to disregard grammar. That goes for texts, emails, blogs, and comments on all social media platforms. In today’s electronic age, the skill to communicate is not only determined by how well we write, but also by how familiar we are with emojis like smiley or sad faces, acronyms like ROFL, LOL, ICYMI, and bolding of words to create emphasis. All these tools are meant to help us express our thoughts more clearly, but have they made us lazy writers in the process?
When someone writes a sentence using all uppercase letters, I imagine them screaming at me. If they also bold it, they’re screaming even louder. If they punctuate the sentence with several exclamation marks … it’s downright deafening.

The Chicago Manual of Style says the exclamat…
Read more

This letter requires your urgent attentionDear SirsRe: John’s Campaign v. Secretary of State for Health and Social Care1.We write this letter in accordance with the Pre-Action Protocol for Judicial Review.  [...]The Proposed ClaimantWe act for Nicci Gerard and Julia Jones who are the co-founders of John’s Campaign https://johnscampaign.org.uk/#/. John’s campaign was founded in 2014 as an organisation that campaigns for the right of people with dementia to be supported by their family carers. John’s Campaign is generally, and here, advocating on behalf of many individuals who have been affected by the issues raised in this letter and we attach to this letter a sample of case studies collected by John’s Campaign which illustrate the issues being faced by hundreds of thousands of care home residents and their relatives across England.The Proposed DefendantThe Secretary of State for Health and Social Care, Department of Health and Social Care, 39 Victoria street, London SW1H 0EU.
That'…
Read more

Being a sucker for children’s books, I’m often drawn to those shelves in a bookshop – only to wonder how many well-established authors of a bygone era would have a chance of being published today. Take Enid Blyton; her stereotypical characters, mediocre writing style and gloriously un-pc assumptions about class and nationality would surely send her straight to the bottom of any slush pile. Yet 50 years after her death, her books still sell in their millions worldwide. Why? Because despite all these shortcomings (which earned her plenty of criticism even in her own lifetime), she knew how to craft a cracking good story, whether it be about a mysterious tree that played host to different magical lands, or about groups of children solving mysteries and going on adventures. She was, in short, a genius.


Blyton’s books will never achieve ‘classic’ status though because they aren’t ones you’d pick up as an adult to enjoy. Children’s books still in print half a century and more after written g…
Read more

Goodnight, and Good Luck - with your bids at the Children in Read charity book auction! - by Alex Marchant

This is my last regular blog post for Authors Electric, so I would like to say farewell and thank you to everyone who has read and commented on my posts over the past couple of years, and for the support of both my fellow author/bloggers and readers.It’s been an exciting time for me since publishing my first children’s novel The Order of the White Boar in October 2017, and I’ve enjoyed sharing the ups and downs of life as a newbie indie author with you all. But I’ve come to realize that a commitment to writing a monthly blog results in time spent away from getting on with the novel writing itself (which is already rather far down the pecking order in terms of time spent). So I’ve sadly decided to call it a day.But I’m calling it a day on a day when the launch has happened of a wonderful charity auction of books! For the next 62 days, until the Friday that is the annual BBC Children in Need day, an auction of more than 500 titles across a range of genres will be underway at https://ww…
Read more