By Cecilia Peartree - April 05, 2019
I had two conversations not long ago that made me wonder whether I should have put a map at the front of my mystery series books. One was an electronic conversation with one of my small band of keen readers in which she (apparently casually) asked me if I had ever drawn a map of the fictitious town where most of my action takes place. Trying to conceal a guilty start, which is easier in electronic form than in real life, I told her I hadn't. I also resisted the temptation to say something like, 'If I'd wanted to spend my time drawing maps I would have been a fantasy writer'.  Actually, I had often thought a map would have been a good idea, if only I had realised at the start of the series that it would go on for such a long time and that there was so much scope for me to create so many geographical misconceptions.

The second conversation took place in real life, just before Christmas in the café of the Scottish National Portrait Gallery. 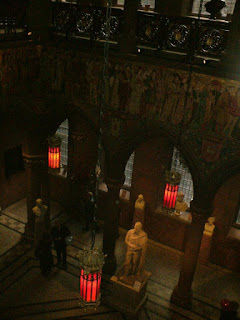 It was with a friend from my schooldays who a few years ago made the alarming confession that she had read all my novels. It turned out that she was even more confused about the geography of my fictitious town than I was. We spent part of lunchtime plotting out the main features of the place on the table, using the salt and pepper pots, cutlery and paper napkins thoughtfully provided for our use. Apparently I had made it sound as if the High Street, represented by a line of cutlery, meandered along by the river front (the edge of the table) instead of rising steeply at right angles to it as I had always thought. When I interrogated my son I discovered he had thought the same as my friend.

It's probably best if I don't make any kind of a map after all - I don't want to shatter everyone else's illusions too. In any case I am not at all good at maps, having been so terrible at geography at school that the teacher once told me I was 'out of this world' - evidently not in a good way.

Another thing I have wondered about adding to the front of the books is a list of characters. However I am not sure that people want to plough through this before getting on with the story. I read a historical novel last week that started with a list of characters, and seeing the list very nearly put me off even starting to read, as it gave the (wrong) impression that the novel was going to be wordy and difficult. In fact what had happened was that I had inadvertently jumped into the middle of a series, and I suppose the writer felt that people doing this might not understand who the minor characters were.

Quite amazingly, in the light of my refusal to get organised in other areas of my life, I do have a spreadsheet for my series characters, although one of my sons happened to glance at it earlier today and was amused to see that one of the entries was for '2 unnamed young men'. He didn't get as far as the latest entry which is '2 men in the dark car' and didn't notice either the 'neighbour who looks like a witch/calls the police'. Some of these characters will acquire names later. For instance, the witch turns out to be the mother of one of the policemen in the story. 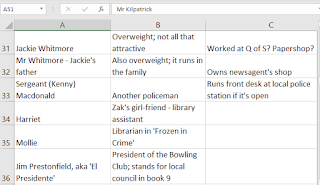 Susan Price said…
It's not only fantasy writers who need maps. I nearly always draw a map, no matter what kind of book I'm writing. I draw plans of the houses my characters are supposed to live in. Google Maps is a great tool for the writer, I find.

Umberto Tosi said…
I love maps. I'd put one in every book, if it didn't seem like overkill with some of them. I put maps in Ophelia Rising, which become a necessity, I thought as my protagonist treked through Western Europe after her getaway from Elisinore with the commedia players troupe. The formatting can tricky with self-publishing print editions. I wish that Amazon would enable Kindle publishers to use hyperlinks effectively in e-books published on its platform - the way we do with our blogs. It would offer an opportunity to add dimensions and choices that could further involve our readers. Too bad most e-reader platforms don't support this Internet technology that has been in use for decades now. Thanks for another swell post.
5 April 2019 at 11:03

Ann Turnbull said…
I LOVE maps! Children's books always used to have them, but then they used to have illustrations and cover pictures painted by artists too... Susan, your lovely map in The Drover's Dogs reminded me of Kidnapped - and then I re-read Kidnapped and realised that Stevenson's map was of more or less the same route, only your map was much clearer. I can't draw, but I always do scribbly maps to help me when writing. If any of you talented self-publishers can draw maps, I'd say please please do!
5 April 2019 at 11:37

Cecilia Peartree said…
Yes, I must admit to being fond of looking at maps, in fact I often plan journeys on real life maps without ever going on them. If I had any kind of skill at drawing them I might be more tempted to include them in my books!
5 April 2019 at 16:24