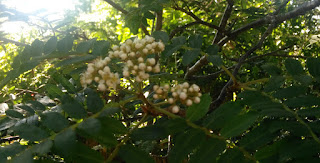 Because I was working on two different novels throughout the month of May, as well as working from home at my part time day job and needless to say also trying to manage a household in which there are three actual cats and two people who might as well be cats, when it comes to herding them that is, I naturally decided it was also time to write a book about writing. 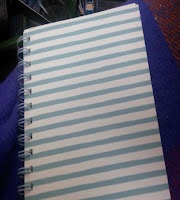 The book was going to be entitled something like 'The Disorganised Writer', and I even started drafting it in rather an attractive green and white striped notebook. The start of the first page demonstrates that I know what I'm talking about on this particular topic, in fact I may be able to recycle what there is of it so far into a chapter in my autobiography, should I ever be silly enough to write one. 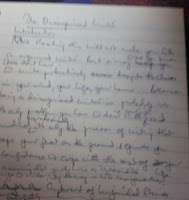 I suspect it wouldn't even have crossed my mind to start on this if I hadn't been at my wits' end with one of the novels I was working on, which was in itself a prime example of the mess a first draft can get into. Not only had I failed to research properly the subject of fishing boats in the early 19th century, and in particular how difficult/impossible it might be to sail one across the Channel single-handed, which affected the plot quite a lot, but the chapters had inexplicably got themselves out of order, and one of my attempts to get them back in order resulted in a series of discrepancies in the numbering which got worse and worse as the novel went on. The book about writing was an avoidance tactic that I should have known better than to give into.

Problems with timelines and the sequence of events  seem to happen to me more often as I get older, but weirdly they haven't yet happened at all with the other novel I was working on in May, despite the fact that I didn't plan or expect to write it. I just woke up one morning some time in April with an idea in my head that was desperate to be developed. I probably only waited a few days between getting the idea and starting to write, which is unusual in itself, because I know from experience that some ideas just won't grow into a whole novel, or if you do try and use them the resulting story will have a kind of black hole in the middle that sucks all the goodness into it.

I had drafted the first of these novels during last November for NaNoWriMo, when I was very much more focussed on word count than on planning. I suppose even given that, it might have worked if I had done a little planning beforehand. I am guessing that I had to rush to finish something else during October and didn't have time to plan my November project.

I don't think my planning will ever be more than minimalist, but that experience, and a couple of other similar ones over the past eighteen months or so, including one book that ended up with the title 'Unrelated Incidents' because I couldn't work out how to connect all the apparently random things that happened in it, may have taught me a lesson. For the novel I'm still writing now, I made a 4 part plan upfront, since expanded into 5 parts, and as I reached each new part, I made a list of the chapters I thought I would need for it. The initial plan only took up half a page in my notebook, and the chapter list for each part is on a similar scale so it didn't call for too much effort. There's is still scope for change and expansion, but I have the sense of being more in control of the plot than usual, and as a bonus, I hope to avoid having to re-number and re-arrange  the chapters during the edit. That's the theory, anyway!

And here is the cover of the above-mentioned problematic novel itself, now available exclusively on Amazon as an ebook and paperback.

Shivendra Yadav said…
Great Content, Superhigh-quality and keep it up :)

Umberto Tosi said…
Sorry to hear about your writing frustrations, Cecilia, but I appreciate your sharing them. They make me feel so not alone! Good luck with your writing book, the novels, and the cats!
6 June 2020 at 15:35