TV's next Downton Abbey will be - not what you think, says Griselda Heppel


Intrigued, I read on to discover the novel in question is The Custom of the Country by one of my favourite authors, Edith Wharton.

Now, this is a great book, but I would never in a million years have related its theme of unscrupulous social climbing to the golden atmosphere of benign overlordship that suffuses Downton Abbey. (Which isn’t meant as a criticism of Downton Abbey – I’ve basked in the cosy escapism provided by all 6 series.) Here, in all the plotlines featuring good or bad behaviour, whether among the upper or the servant classes, I can’t remember a single one in which a ruthless, ambitious, hard as nails nobody sets out to topple the ancient social order and succeeds. There are a couple of devious valets, one Irish nationalist chauffeur, some brave leftwing newspaper hacks and lots of scullery maids striving to better themselves, but not one of these ousts the kindly Lord Grantham from his place at the top of the hierarchy, nor would they wish to. 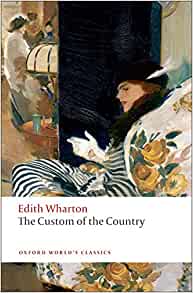 By contrast, Edith Wharton’s heroine, the gloriously named Undine Spragg, uses her beauty to carve her way to the top of American society, trashing ‘old’ aristocracy in New York and Europe alike, unfazed by the real human suffering she leaves in her wake. This is so opposite to the atmosphere and values of Downton Abbey that it’s hard to see how the one could arise from the other; yet here is Julian Fellowes speaking in 2013:

‘Undine has no values except ambition, greed and desire, and yet through the miracle of Wharton’s writing, you are on her side…. I want Downton to be a warm show and I hope I am kind to them in their weakness… I do feel it is a lesson I have learnt directly from the writing of Edith Wharton.’

This is splendid of Fellowes and also fascinating. Wharton’s writing is indeed miraculous, but I’m not sure it puts you on Undine’s side, any more than reading Vanity Fair makes you root unequivocally for the heartless Becky Sharp. Undine and Becky are both antiheroines, brilliantly drawn, sent by their creators as missiles to wreak havoc on traditional society, destroying good and bad aspects of it alike without a care in the world. Fellowes’s characters, on the other hand, have their faults; but Downton Abbey’s great appeal lies in the unstated assurance of all romantic fiction, that everything will work out all right. The characters we get to know and love will all end up happy and fulfilled and – this is the crucial bit – will deserve to. 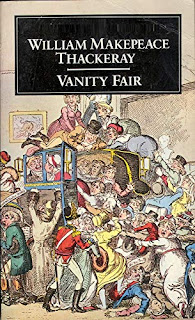 Since The Custom of the Country is no more a romance than Vanity Fair, I’m not sure Fellowes’s endorsement will help Sofia Coppola in her task of adapting it for television. Audiences expecting a similar feelgood story to Downton Abbey will be disappointed. Several previous attempts in the last 30 years to turn the book into film have foundered and I can’t help wondering if this is to do with the difficulty of catering to this kind of audience expectation.

Beautiful, scheming, ice-cold survivor Undine Spragg will be a fabulous role to play and if Coppola’s screenplay stays faithful to the spirit of Edith Wharton, this could be a terrific film. Yet I fear she may feel pressurised to go down the same road as every adaptor of Thackeray’s masterpiece has done, and ultimately ‘redeem’ Undine, just as Becky Sharp is always ‘redeemed’ at the end of films of Vanity Fair.

Sandra Horn said…
Fascinating, Griselda! I thought I'd read all of Wharton, so thank you for drawing my attention to one I hadn't come across. I hope the adaptation doesn't turn out to be too sugar-coated. Julian Fellowes doesn't seem to do dark.
1 June 2020 at 08:30

James Franklin said…
I'm a professional writer and I already published 8 books. I always choose self-publishing to publish my books. Because I don't want to lose the right and royalties of my books.
1 June 2020 at 16:14

Shivendra Yadav said…
Great Content, Superhigh-quality and keep it up :)

Griselda Heppel said…
Thank you Sandra! Great that you're another Wharton fan. I think I've read all of her books - and if I haven't, I'm not sure I can bear the sadness anymore. I found it hard enough when young. She is still for me one of the greatest writers of all time and the way she depicts the pain and lost opportunities in people's lives is so extraordinary it makes agonising reading.

It'll be interesting to see what Sofia Coppola makes of The Custom of the Country (there's no way Fellowes could adapt it without engineering a happy ending all round!)
5 June 2020 at 19:52

How are doing? Hope your mother is ok?

Re your post: I have not read 'The Custom of the Country', hence can't anticipate the possible kinds of adaptations it might have. But I've both read Thackeray's 'Vanity Fair' & seen Mira Nair's adaptation of it many years ago. Of what I remember of that film is this - it was an interesting adaptation, but the satire of the novel was missing in the film. I think that is almost always the case when you are translating from the narrative to the dramatic. However, Reese Witherspoon's Becky was spunky enough to hold my attention throughout the film.

I think there is a web-series of 'Vanity Fair' streaming somewhere now...

Hope Sofia Coppola doesn't disappoint you with the adaptation of your favourite book!

Griselda Heppel said…
Thank you Rituparna, my mother is fine. Getting v tired of the lockdown but she's not alone in that! Glad you enjoyed my post. Yes, film and TV adaptations of Vanity Fair just don't seem able to convey the brilliance of the satire. Let's see how Coppola gets on.
7 July 2020 at 17:45