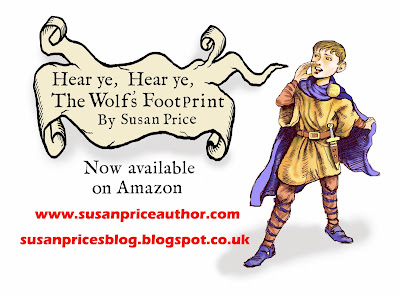 And not only available on Amazon, but also on Barnes & Noble's Nook, and on Kobo too, thanks to Draft2Digital, which is a great boon to the self-publisher.
Nice ad, eh? It was put together by my brother, Andrew, from one of his own illustrations for the book. This one:- 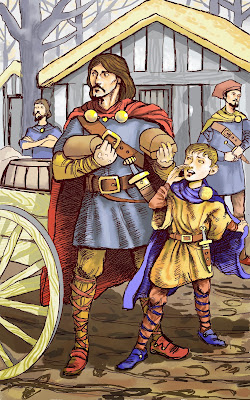 At the moment we're battling through the problems of turning The Wolf's Footprint into a paper book, with Createspace. The pictures in the paperback will probably be black and white, because of the expense of colour-printing - but in the e-book they can be as colourful as we like.
I asked the artist who produced the illustrations, Andrew Price, about the size the images needed to be. He said that the images in Wolf's Footprint are 1563 pixels wide by 2500 pixels high. This is a good size to give good resolution on a kindle. If you're working with an artist, he says, it's the artist's job to make sure the images have an adequate resolution - that is, enough pixels not to blur or pixellate.
If you use photos, he says, it's probably best not to use a 'raw' photo straight from a camera, as it will probably be too big.
But this blog is already too long to go into that. Maybe I'll tell you how to resize a photo another day.

We found that when making an e-book, it's easy enough to insert a picture if you start with a Word file. You use the 'Insert Picture' tool to insert the picture wherever you want it. 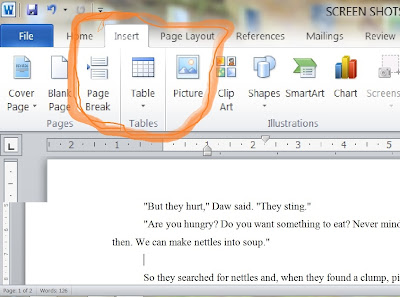 When the picture appears in the text the 'Picture Tool' opens, which enables you to position the picture relative to the text. 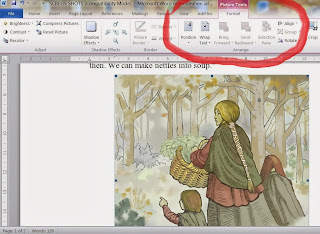 Click on 'Position' and a menu opens to help you position the image. Most of these positions are intended for use in publishing paper magazines and newsletters. They don't work well with the 'flowing' text of e-readers, which can be changed by the reader.
So use, 'In Line.' Then go back to 'Home' and centre the picture as you might a line of text. 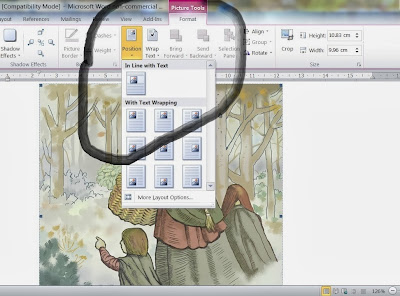 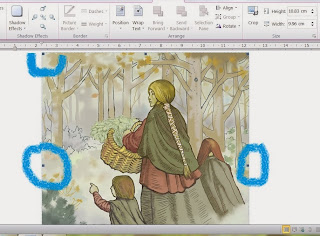 If you pull at the squares on the image's sides, you will stretch the image out of proportion - so stick to the squares at the corners and pull, or push, diagonally.
The text will accomodate itself to the new size.
Things become more difficult when you view your book in the previewer. The picture looks too big or too small. Or it has forced a large chunk of text on to another page, leaving a big, uncomfortable gap.
We simply had to play around. We noted where the illustrations caused problems, and went back to the original file and changed it. Then loaded it into the Previewer again, repeating this until we had something which we thought was the best compromise we could make.

But then we came up against the problem that, when you tried different font sizes, the size of the illustrations also changed. Sometimes they shrank - sometimes they became so large that they went off the edge of the page.
Andrew and I looked into this and found that there was a way of 'fixing' the book at a size we chose, so that it couldn't be changed on an e-reader.
However, I chose not to do this. Firstly, I don't think I would like this myself. One of the things I like about e-readers is being able to change the line-spacing and font-size, and even whether the screen is portrait or landscape.
Secondly, a scan of forums and opinion on the net suggested that a great many people agree with me. So I chose to publish the book with a 'flowing' format, and the following warning:

Please note: a decision was taken not to fix the format, so that the font-size and line spacing can be changed on e-readers. However, depending on the e-reader used and the font-size chosen, the size of the picture will also change, and in some cases, may become too large for the page. Reduce the font size and the picture size will shrink too. This is unavoidable without fixing the format, which has other disadvantages.
Readers may need to experiment to find the size that best suits them.

Draft2Digital allows you to make three different files - a mobi file suitable for the Kindle, an epub file suitable for Barnes & Noble, iPad and Kobo, and, finally, a PFD file for their still experimental CreateSpace publishing. They supply links to previewers for all of these - and we found that we had a whole lot more fiddling to do with the epub files. And then had to start again with CreateSpace.
But we'll get there...
And I'm pleased to say that a copy of The Wolf's Footprint was bought by someone in America almost as soon as it appeared on-line, before I'd had any chance to publicise it at all. I don't know who you are, generous and kindly American citizen, but thank you.

And if there should be any other generous and kindly souls out there... 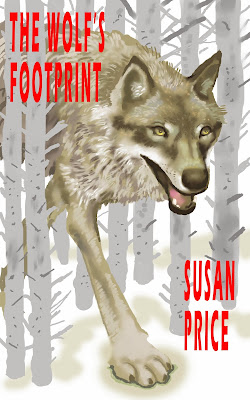 Susan Price has been a professional writer for over forty years, and had won both The Carnegie Medal and the Guardian Fiction prize.
Her website can be found here: http://www.susanpriceauthor.com/

julia jones said…
Clever stuff (though way above my head of course) Will it be filed in our 'how-to- section? It really should be.

madwippitt said…
I like the disclaimer - can I borrow it for mine please? (Just too lazy to dream up my own wording ... I'll include an acknowledgment for you!)
Looking at these fab pics I'm almost tempted to buy a Kindle Fire ...
Did you reduce the size of the pics at all to make the file size a bit smaller, and if so could I ask to what dims?
25 November 2013 at 08:13

Bill Kirton said…
Thanks for this, Susan. I've been trying to psych myself up to format some of my own illustrated children's stories but have so far set them aside for the reasons you've highlighted - resizing, the demands of the different e-readers, etc. I'm still nowhere near ready to start but, like madwippit, I'd like to use your disclaimer when I do please.
I also agree with Julia's suggestion that it should be added to our 'How-to' section.
25 November 2013 at 10:37

Susan Price said…
Thanks, folks! - Anyway who wants to use my 'disclaimer' can. I'll put it in the 'How To' section, though I'm not sure it really belongs there.

I'll have to ask my brother about the sizing, Madwippet. I think he makes the pictures deliberately large (in the digital sense) so that they will reduce with clarity - but he does resize them and 'flattens' them before they're loaded into the book. 'Flatten' is the term he uses anyway. Hey - I just write the words!
25 November 2013 at 12:04

Nick Green said…
I will charge my Kindle this very night and buy it. Love those illustrations. The Price family clearly fell out of a Talent tree and hit every branch on the way down.
25 November 2013 at 12:12