By Lynne Garner - November 28, 2013
Our previous joint blog (under the same name) went down so well that another three members of the team (Kathleen Jones, Susan Price and Valerie Laws) have decided to share where they work as well.

When I moved in with my partner there was nowhere for me to write.  It was an old industrial building adapted to the needs of a sculptor who sloshed plaster and clay about and who needed large, draughty spaces to mix toxic chemicals for casting. The living space was basic and cramped.  I wanted a quiet room to crawl into with space to think and spread papers around, enough light to read books and sometimes write them. It was quite a problem.  But the man wanted me to stay and so he decided to fix up something to tempt me.

Up in the rafters, on the top floor of the mill, he made a platform under two big skylights, built in a desk against the slope of the roof with plenty of space for files and a computer.  The roof has wonderful oak crown beams and it would have been criminal to hide them, so Neil filled in between them with bullet proof glass - from a bank they were demolishing - so it has one glass wall.  Then he made a day bed where I could quietly go to sleep with a book when I was pretending to be working (!).  I called it my Rapunzel Room, because you have to go up a steep set of wooden steps to get into it and I can shut myself in and ignore everyone.
It's a beautiful room, and not everyone gets one made just for them - and certainly not with bullet proof glass. Twenty years later I'm still here - though (all the fault of the man again) currently writing quite a lot on a terrace in Italy - but that's another story! 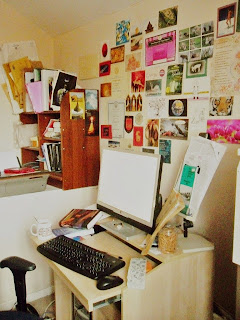 Out of shot, to the right of the desk, is my filing cabinet which is topped by a display of birthday and Valentine cards given to me by my partner over the years.
The brown bookshelf at the back holds various reference books – such as my copes of Briggs ‘Folk Tales in the English Language, a thesaurus, dictionary, and books on the origins of place-names.
Stuck to the end of the shelf is a photo of my late and still lamented cat, Biffo, a shot of the Gokstad ship, and one of the sun shining into the Neolithic tomb of Newgrange on the Midwinter Solstice.
Behind the desk I’ve stuck up awards, post-cards, photos, greetings cards – anything which appealed to me for its image, colours or humour.  (There is a cartoon cat saying to a dog, ‘I was a dog in my previous life, but I came back as a god.’) At the moment they are partly overlayed by a sketch map of the territory in my WIP, Sterkarm 3. It’s loosely based on a real area, which I peer down on using Google satellite, but altered to suit my purposes.
It’s my favourite room in the house.
______________________________________________________________________________

One of the many glories of unexpected divorce is moving house, which like having your bikini line waxed is horribly painful for a short spell but has a pleasing result. I still think of this as my ‘new house’ but I’ve been here for almost exactly 11 years. One of the essential boxes my new house had to tick was a room to write in, a study if you will, which would be mine, all mine, mwahhahahahaha, and that’s what I’ve got. It’s the fourth bedroom, but it was already done out as a home office with a huge built in cupboard with sliding doors and a room-width built in desk and shelves. And a warm apricot colour on the walls which I like and haven’t changed. It’s at the back of the house and overlooks my and others’ gardens.

I cope with disability and hatred of housework by two methods, one is having a cleaner come in for two hours a fortnight, and one is keeping the house fairly minimalist and tidy, but my study is a corner of chaos with stuff on every wall, bursting out of cupboards, piled on shelves, and often strewn across the floor as well. In my study I have some of my prized skull collection, which feature in my crime novel THE ROTTING SPOT, looking down at me and wishing me well. A horse, a deer, a wild goat, a gannet, a badger... and a human spine which also has featured in my writing. The walls, doors, surfaces are covered with posters for my plays, or performances: souvenirs of events, successes, adventures, awards, name badges from exciting times like attending the recording of my BBC radio play: and amid many books, my own (and many others my work features in) are above my desk in prominent position. If this sounds like vanity, it’s not, it’s the opposite. Each tiny step in the journey of being a writer, from the very first poem accepted by a magazine, could be as good as it gets, and even if you’re lucky enough like me to write for a living, there are many famines amid feasts. These souvenirs remind me that I have achieved something I love and value, however small, even if it all stopped tomorrow! I also have pictures of my children on the walls and all sorts of odds and ends. My computer is an ‘all in one’ or perhaps a ‘onesie’? I don’t like towers humming below me. I have a glowing rock salt lamp next to the pc which supposedly counteracts bad vibes from electrics but is lovely to warm my hands on! I write on trains and at my boyfriend’s house and when on holiday or travelling generally, but most of my writing happens in here.


We hope you've enjoyed reading about our writing places and would love to hear about yours.
Kathleen Jones Susan Price Valerie Laws

Lydia Bennet said…
I was sure I sent a pic of my writing room! Lovely to read about Kathleen's and Susan's. I love glass walls, bullet-proof is so cool!