The Lincoln of All Crinklies by Reb MacRath

Lawrence Sanders should be the patron saint of all older writers....and all younger writers who hope to hang around. He published his first book, The Anderson Tapes, in 1970--when he was fifty--and went on to publish 37 books before his death in 1998. And if you like humble beginnings: After working for Macy's, Sanders worked as an editorial writer and sold action stories on the side for $75 a pop. His hardcover advance for The Anderson Tapes was a lowly $3,000. But the humble origins took a rich turn when his agent sold the film rights for $100,000...then the paperback rights for twice that. And Sanders' advances continued to rise until he pulled in seven figures and owned two condos in Pompano Beach.

Yes, a film sale can make a big difference. 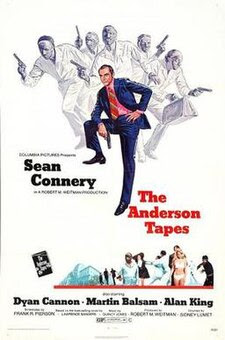 And it didn't hurt at all to have Sean Connery in the lead role or Sydney Lumet as the director. True, we can't all count on that kind of luck. But, luckily, The Colonel has left us with some lessons as enduring as his better novels.

1) We must orchestrate our releases and our production schedules.
Sanders led with a high-concept novel about a gang of thieves robbing an apartment building--with the story told in transcripts from bugging devices. This was different at the time and the trick tied right in with the theme of the book. It also made for a quick, thrilling read. Perfect introduction to an entertaining new writer. He was already working on what would be his blockbuster:  a riveting police procedural with one of the genre's all-time greatest hooks--each book would be based upon a deadly sin. 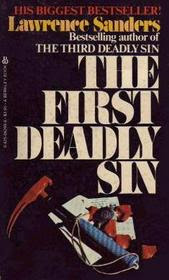 As we all know, the gambit worked. Its publication in 1973 was followed by three more books in the series, four years in between each one. These dark and densely detailed works demanded more time from the writer--and more effort from his readers, who welcomed the breaks in between them. If Sanders had led with The First Deadly Sin, his career might not have taken off. Instead, he earned readers' trust and good will with two lightweight, popular novels before the 1st Sin's release. This link will take you to Sander's fiction output. You'll see two titles on the right, under Miscellaneous, published between The Anderson Tapes and The First Deadly Sin.

2) Carefully, carefully, work in the backlist when you can. Or do quickies to keep up your output.
Sanders has seventeen titles listed under Miscellaneous. The variance in quality is so extreme that Sanders had to be pulling old books from his trunk. Not bad, but still substandard stuff. The Case of Lucy Bending is one notable exception. Sullivan's Sting is another. But the rest helped him maintain his output in his game of Beat the Clock.  Another way of doing that was this:

3) Begin a rival series of books that also show you at your best--but are easier to write and read. Let these still have some grit but be bursting with light.

Another masterstroke from The Colonel: Now that he'd locked up the Deadly Sins, he claimed ownership of the Commandments. Many readers prefer these lighter standalone titles to the darker Sins. The Sixth Commandment was first in the series, published in 1978, one year after The Second Deadly Sin. 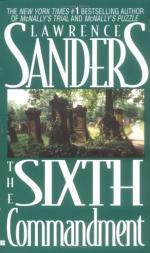 For the next eight years or so, the Sins and the Commandments ruled--and while they did, The Colonel kept putting out either more quickies or more backlist titles.

4) Stick religiously to a schedule kind to your health and your age.
Sanders wrote up to five pages a night, seven nights a week.

5) Be mindful that we cannot do the quickstep all our lives. Prepare..
At its best, Lawrence Sanders' style reminds me of classical writers I love. Oh, to be sure, it has strong streaks of pulp: tough, gritty dialog...splashes of violence...steamy sex. But his transitions are superb, his descriptions are sparse but tellling, and his voice is clear and commanding as you'd expect from his photo. Let me add: in his balance of short and long sentences, he's every bit as deft as Tacitus or Pushkin. And I'm not laying it on thick, he's that good. But in his seventies, Sanders scaled down and turned to his third major series: the Archy McNally novels.

Sanders wrote seven of these novels before his death: pure fluff about a young playboy P.I. who works for his rich father's law firm, in the Discreet Inquiries department. The mysteries themselves intrigue. But the style bears no resemblance to anything Sanders had written before. They're all done in the First Person Cute, with a plethora, if not a preponderance, of highfalutin' words. It's distinctive, if not Sanders--which have may been the point.  Vincent Lardo was able to capture it perfectly in six more McNally books after Sanders' death--whereas no one could mimic Lawrence Sanders in his prime. The Colonel kept on sailing, beneath a different banner, but sailing nonetheless. And though I prefer his earlier books, I'm thankful for these books too...and the sailing lesson they contain.

;
Special Bonuses:
1) Favorite Sanders Opening Line. From The Sixth Commandment:
I was an only child--and so I became an only man.

2) Favorite Sanders Chapter Opening Paragraphs. From The Third Deadly Sin:
By Monday Morning the sky had been rinsed; a casaba sun loomed;and pedestrians strode with opened coats flapping. A chill breeze nipped, but New York had the lift of early winter, with stores preparing for Christmas, and street vendors hawking hot pretzels and roasted chestnuts.
Former Chief of Detectives Edward X. Delaney sensed the acceleration. The city, his city, was moving faster, tempo changing from andante to con anima. The scent of money was in the air. It was the spending season--and if the boosters didn't make it in the next six weeks, they never would.


End note:
Open for further discussion: Other Slightly Older Guys/Gals who enjoyed writing success later in life. Another fine example, though not in Sanders' league, was William Diehl--who published Sharky's Machine in 1978, when he was 54--almost the same age as Sanders when The First Deadly Sin hit the stands. Before his death in 2006, he published eight more novels.

Any other favorite names of those who passed on the pleasure of being put to pasture?

Hmmmm .... but film adaptations can be horrendous - The Seeker - adapted from Susan Cooper's Dark is Rising left me frothing at the mouth and must have left her absolutely appalled. Although of course The Princess Bride is sublime - but then William Goldman, who wrote the book, also did the screenplay and had some heft in the casting ...

I'd never heard of him but he shows I'll have to get my skates on: there's only ten years to go. Yes, Lee, Penelope Fitzgerald is indeed a jewel of a writer. Her Cambridge novel Gate of Angels is, along with AS Byatt's Possession, the only novel I've read four times, except for the Arthur Ransomes when I was nobbutt a lad.

Thanks Reb - there's hope for me then. First novel (the SSB) at 57 though without self-pub it would never have happened.

I'll have to check out Penelope Fitzgerald. sounds like a new delight awaits. Another thing to bear in mind is the relativity of age. G B Shaw failed at pretty much everything until he turned forty--which must have been something like sixty today. Film adaptations are often a mess. But Sanders and Diehl both had fine luck. I don't think either film was a smashing box office success-but the buzz was big enough to get those two 'geezers' going. Diehl, in particular, was said to enjoy a swinging Hollywoodish lifestyle in his Southern town.

Interesting analysis Reb! Writing is one thing age shouldn't stop us doing unless the ideas stop coming which can be at any age..

Good point, Val/Lydia. Tillie Olsen wrote a magnificent small book on the subject of wells running dry. (Title: Silences.) Luckily, there's no shortage of examples of distinguished long careers. The best way to keep producing may be to keep producing.

Reb, I'm not sure it's age so much as becoming 'written out', so to speak. All too often, there's a plateau which is reached by mature writers, who then stop challenging themselves. Perhaps the later you start, the later you run down. Perhaps. And of course, there are always exceptions.