The Fickle Finger of Fate by Mark Chisnell 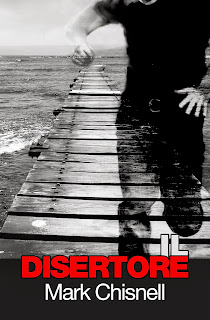 Every now and again I get an email from Amazon’s Kindle Direct Publishing (KDP) team. Usually these are bringing my attention to some discrepancy or other in one of the 11 books I have published with KDP, often requiring swift remedial action. A recent one required me to check the HTML coding that I had used on my book description pages, and to do it in less than 24 hours. They were about to change the way the website presented the HTML, and if I didn’t get it sorted… well, quite frankly, my book pages would look crap… or words to that effect.

So when I see these emails pop into my inbox I open them with some trepidation. Whatever I was expecting from the one that arrived a couple of days before the end of October, it wasn’t this…

“We are considering including your book: Il disertore in an upcoming promotion in the Amazon.it Kindle Book Store.”

Promotion? In the Amazon.it store? I read on with a churning stomach. I’ve written previously on the joys of Indie-pub translation, and the Italian edition of The Defector is one of the results of that part of my not-so-master-plan. The lovely Ina Uzzanu approached me after I blogged on the topic and offered to translate one of my books. We talked, chose The Defector, did a royalty-based deal, and it’s been selling steadily in quantities that often have it hovering around the top 1,000 books – but this was an opportunity to hit a whole new level.

Il disertore was to be part of the ‘Offer of the Month’ promotion along with a number of other thrillers. A swift reply was required, and I said yes without any further thought. The fickle finger of fate had chosen me – I had no idea why, but I wasn’t about to blink. I went for the maximum discount for maximum sales and chart exposure, got the thumbs up from the KDP team and sat back to wait.

On the 1st November Il disertore appeared for sale at 99c on the Offer of the Month page and I stopped breathing.... how would I do against some impressive opposition in the promotion?

I’m writing this just short of three weeks later, after Il disertore has been in the promotion for 19 days, and in the Top 100 on the Amazon.it chart for two weeks.

I think it’s fair to say that it’s been a success, although I guess the real test will be to see how well the book does once the promotion is over – but with 15 reviews and 4.3 stars I’m hoping it will hang around in the charts for a little bit longer.

The next question is... how do I get into the same promotion at Amazon.de, Amazon.co.uk and lordy help us... the motherlode at Amazon.com??

Connect with Mark Chisnell online at:

Bill Kirton said…
Great news, Mark. I think the very fact that someone wanted to translate your work is in itself a victory. So far, my only experience of being a translated author has been the surprise receipt of a copy of one of my non-fiction books in Korean, which spawned fantasies of Kim-Jong-un exhorting his people to buy it and my subsequent tax exile. He hasn't yet obliged.
22 November 2013 at 11:28

Lydia Bennet said…
exciting stuff, Mark, well done. Lucky to find someone to translate your book - most of us would find paying someone to do this beyond our means for the probable returns - my son is fluent in French and German but has a demanding job.
22 November 2013 at 12:11

Mark Chisnell said…
Thanks, folks, but I didn't have to pay anything up front for the translation - I pay a percentage of the royalty income. These deals are pretty common now amongst indie writers and translators!
22 November 2013 at 17:29

julia jones said…
Congratulations Mark. Did you write an AE blog about getting your books translated? I must have a little search ..
24 November 2013 at 00:18

It was a while back, but the link is here: