Nick Green: Through the Portal

You know that thing where you walk out to pat the coalman’s horse, and a speeding Lexus mows you down? That’s called future shock. Technology and culture race by so fast that you’re left stupefied, feeling obsolete. And sometimes the cause of this trauma is already considered old-hat by some.

What I’m going to rave about here is apparently ‘sew last decade’. Indeed, it’s considered a classic, so fast do these things move now. I’m sorry, cool young person who just stumbled on this blog by accident, I’d never heard of it before. Okay? Consider me woken up.

My tale I wol bigynne. It started when I found a page of pithy quotes from a fictional character, a villain, a truly nightmarish specimen. This character, GLaDOS, is a sentient computer, inspired by HAL in 2001: A Space Odyssey, but taking the psychoses up to eleven. She could be HAL’s bloodthirstier, more cake-obsessed little sister, venting sarcasm and passive aggression in every silicon breath. 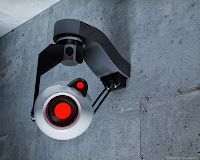 ‘Cake and grief counselling will be available at the conclusion of the test.’ 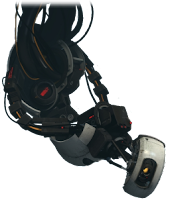 ‘That thing isn't important to me; it's the fluid catalytic cracking unit. It made shoes for orphans. Nice job breaking it, hero.’

I assumed GLaDOS was a character on a slick US sci-fi series, shown on one of the channels that my worthless oaf of a Virgin Media package won’t supply. Maybe the show itself was based on a novel I really should read. In search of more GLaDOS goodness (‘When I said "deadly neurotoxin," the "deadly" was in massive sarcasm quotes’) I set about tracking this masterwork down.

It was a game.

(Young person, stop rolling your eyes. I know you knew that. And pull up your waistband.)

The game is (was?) Portal, released in 2007, so it’s practically Scrabble by now. I’ve never actually played it. The last computer game I owned had ladders and levels, and from the clips I’ve seen on YouTube, Portal requires the kind of three dimensional thinking that would have Mr Spock crying for his mummy. It’s only the villain that fascinates me, even if she was intended as just the icing on the cake.

There’s a lot more to GLaDOS than snarky remarks. The brilliance of the writing (I don’t think that’s overegging it) is in the creation of a complex, convincing, multifaceted, terrifying yet ultimately tragic character, using nothing but those snarky remarks. Join the dots and you see the outline of a recognisable, if non-human, person.

GLaDOS is the AI manager of a research facility, developing a futuristic weapon. One by one, human test subjects (that’s you, gamer) put the weapon through complex trials, at the end of which each volunteer is supposedly given refreshment in the form of cake. But somewhere along the line, things have gone terribly wrong. The research facility is now devoid of life, except for the volunteers (revived from stasis one by one), with GLaDOS herself left to run the experiment single-handed, with no-one around to tell her to stop. 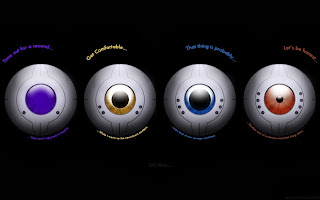 As the tests progress from challenging to deadly, GLaDOS makes ever more earnest, yet increasingly hollow-sounding, promises of cake at the end of it all. In her robotic brain, she clings to the truth that Humans Like Cake, failing to understand that this sugary incentive cannot compensate for the risk of repeated incineration/evisceration. This lack of nuance defines her eerie near-humanity, the flaw that makes her ultimately a psychopath. Even worse, the cake is a lie. It obviously ran out years ago, but GLaDOS must continue to put her subjects through the tests, for science. And if they survive long enough to actually make it to the cake room (now empty even of the bones of the scientists she gassed) she has to cover up the fact that she’s been lying all this time by tipping each candidate into a furnace. (The truly skilled can avoid this fate). Look, she’s just really keen on her job.

The full story is never made explicit – I’ve pieced it together from the available clues. But to sketch this fascinating, funny, tragic, gripping sci-fi short story with just a string of sour remarks is a remarkable achievement. It’s writing, Jim, but not as we know it.

Why did the Renaissance church have all the best artists and composers? (Bear with me…)  Maybe they were divinely inspired. Or maybe it was that the church had all the money, so hoovered up the top talent. Something of that kind may be happening now. Gaming is a massive business, rivalling the film industry and squashing pop music like a bug. I won’t even mention publishing in that list. Suffice to say, that’s where the cash is now, and the talent is following. So we may be seeing the sharpest, wittiest writers deserting traditional fiction to write characters for games, while the rest of us tread water in the Amazon, swamped by a zillion ebooks that you wouldn’t feed to Doctor Who’s K9.

In darker moments, it’s easy for a writer of ‘mere books’ to feel like the hapless protagonist of Portal, straining every brain cell in the hope of reaching a prize that has long since mouldered away. We write our old-fashioned books and we think we’re doing great, when all the time we’re like the human lab rats in the Enrichment Center, a place deserted by all but an automated system. You don’t have to spend long on Amazon’s KDP to realise that, for all but a lucky few, The Cake Is A Lie. Could I at least have the grief counselling? 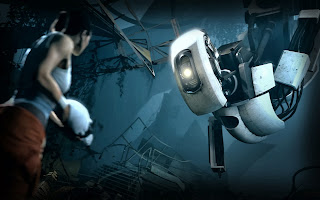 ‘Do you think I'm trying to trick you with reverse psychology? I mean, seriously, now.’

However. Once I was over my future shock, I noticed an interesting thing. Nothing, really, has changed at all. Because it wasn’t the mind-blowing gameplay or realism of the Portal game that had captivated me. It was the character of GLaDOS. It was the set-up, the story. It was the writing.

Even in a hurricane of high-tech wowsery, it is the written words that shine out. And I’m not alone in this verdict. The gamers themselves agree. How else would I come across a page of GLaDOS quotes, when I don’t even play these games? When all the puzzles are solved, it’s the character that stays with you. Even in the world beyond the Portal, story is still king.

‘But there’s no sense crying over every mistake
You just keep on trying till you run out of cake.’

Interesting post. I've never come across GLaDOS and did wonder if it was in your imagination. However, I do know DOS (Disk Operating System). You see I'm a dinosaur as far as computers go, and that was the operating system I started with. There was another operating system with similar initials but I can't quite remember what they were as it was always DOS I used. Templates were called Boilerplates in those far off days. You had to know a wee bit about programming to use DOS, well maybe not programming but something similar to it. To get anywhere you had to enter commands. No Windows in those days. I did say I was a dinosaur didn't I? One area I never ventured into was games, although my son did. I must ask him about GLaDOS. But never mind that one, DOS made a very good villain, never knew if I was running it or it was running me.

Yeah, very interesting post Nick. The phrase that springs to mind is 'mutate to survive' I think you're right that to 'make it' in the new fangled world we have to go with it - and so it seems a sensible suggestion that writers go where the readers (or consumers) are if they want to a) make money b) be 'successful'. An acceptance that the media most of us write for (even if we think we're funky by digitising it) is not in the forefront of cutting edge money making opportunities can be depressing but also liberating. Requires a mind change as to WHY one writes, and a reassessment of these fundamental principles can be liberating (or terryfying if you are one who really believes they will 'make it' through indie ebook sales!) I'm in the process of mutating in another direction (still at the 'teaser' stage. Have to keep reminding myself its not about the money - and it's about as far from gaming as you can be - but then I'm banking on the fact that there are plenty of us dinosaurs who aren't sucked up or into this brave new world. Or who can have a foot in both camps. But I think the sentiment of your piece is offering us the choice: follow the money or do your own thing. But we should always remember that actions have consequences. Story IS king and writers have a choice how and where to ply their trade. Thanks for the reminder.

Food (cake perhaps) for thought indeed! Perhaps there are new areas for writers just beginning out there, or we can think of some ourselves...