My Life as a Man by Kathleen Jones 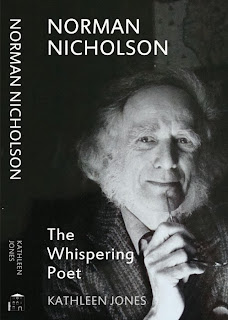 When I was asked to write the biography of the English poet Norman Nicholson, I realised that it was the first time anyone had ever wanted me to write about a man.  All my earlier commissioned biographies had been about the lives of women.  How easy was it going to be, I wondered, to get inside a man’s skin, inside his head, understand how he thought, why he did what he did, wrote what he wrote?  Are men so very different to women?

Novelists do this kind of gender switch all the time, though when I began to look, writers do tend to create their main protagonists of similar gender.  And when they don’t there are some notable failures.  Katherine Mansfield laughed herself sick over D.H. Lawrence’s description of ‘the trill in the bowels’ that told his heroine that she was pregnant. And the suave Alpha male types of the romantic novel aren’t rendered as deep character studies of the male psyche. I knew I was going to have to employ my imagination as well as human empathy for my gender switch.

Norman Nicholson was born at the beginning of World War I, into a working class family in an industrial community on the edge of the English Lake District.  Even as a child he wanted to be a writer - which was at least something that I could empathise with.   He excelled at school and was on track to win a scholarship to Oxford, his ticket out of poverty, but at 16 he was struck down by the scourge of the 20th century - Tuberculosis.  Norman spent two years in a private sanatorium that almost bankrupt his parents and institutionalised him so thoroughly he spent the rest of his life living like an invalid.

But, as my research into 18th and 19th century women had discovered, being an invalid released people from the obligations of their gender.  Instead of going out to earn a living, Norman was allowed to stay in his attic bedroom and write.  By his mid-twenties he had been taken up by T.S. Eliot at Faber and by the time he was 30 he had become a literary star. So far so good! 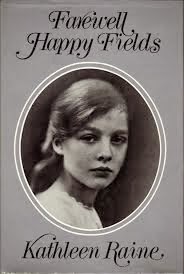 The beloved is not love,
Nor poetry the grammar and the theme.
But when the beloved – oh with hair
Like seaweed on the rocks
When desire flows back at the turn of the night –
Then she seems
All that love is
And being herself is loving.  So the song
Seems cause and crown of singing, and the dream
The body and bride of longing,
To one who seeks thought’s lips with his tongue

It was impossible to discover whether their relationship had ever been more than a romantic attraction. Neither of them were available for comment.  And arguably, it isn’t anyone else’s business but their own.

My main difficulty in writing about a man was understanding Norman’s sexuality.  And this didn’t have anything to do with prurient curiosity - it was essential for an understanding of his work and in order to deal with critical interpretations.  Stephen Spender accused him of writing a mixture of ‘sex, sin and sanctitude’. Other critics identified  a strong sense of sexual frustration running through his prose and his poetry.  How on earth was I to get to grips with this?

Norman had been wrapped in cotton wool from birth - a delicate, precious, only child whose mother died when he was 5.  He was then raised by a prudish Methodist step-mother.  He was deeply religious and under the influence of a celibate priest/poet called George Every.  Several promising relationships foundered before he married at the age of 42. He never left home, living in the same house for the whole of his life.  His long-suffering wife moved in with Norman and her mother-in-law and agreed not to have children - something else I found hard to understand. The characters in his novels are racked by guilt over their sexuality and I suspected that they may have been autobiographical.  It would need a Freudian psychologist to unravel all the ties that bound Norman, but one reviewer commented that it would take a good parish priest less than a fortnight to sort his characters out.

Research was made more difficult by the fact that Norman didn’t keep letters - he used them as scrap paper to compose poems on and then destroyed them.  Only a fraction of his correspondence survives.  Luckily two women in his life kept his letters to them and these collections are invaluable to an understanding of his thinking and the way he behaved in relationships.

There were a few surprises - a close friendship with Ted Hughes emerged, and Ted wrote letters of condolence to Norman after the death of his wife, which shed light on his own relationship with Sylvia Plath. An acrimonious exchange with Philip Larkin (whose own sexuality was bizarre to say the least) made for a lively afternoon in the University library. It was also a surprise to find how passionately Norman felt about environmental issues, and how eloquently he wrote about them in poetry and prose. His work is as relevant now as it was when he wrote it.

Yes, it was very different writing about a man.  You don’t have the insights you have into someone of your own gender - the problems and dilemmas they face aren’t the same. I had no idea what it might feel like to be born into a very macho working class male culture and know from an early age that you are different.  But I did know what it felt like not to conform to gender expectations. Probably not so different between men and women.

It’s been interesting to spend two years exploring the male psyche, trying to see what the world looks like through a man’s eyes.  Whether I’ve got it right is something only the readers can tell me, when Norman Nicholson: The Whispering Poet finally goes on sale in a couple of weeks’ time.  The print book has been promised for Friday 7th November (fingers firmly crossed!), the E-book will be on sale in a couple of days. 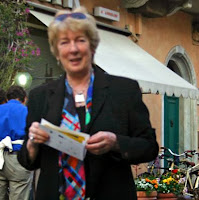 Kathleen Jones blogs at 'A Writer's Life'
And you can find her books here
More information at  http://www.kathleenjones.co.uk

Fascinating, Kathleen. I'm looking forward to reading it. He is indeed a wonderful poet and it seems to me you understand him pretty well. But the problem of understanding and empathising with the opposite sex is one which all authors have to come to terms with. I see very clearly why women don't think Lawrence doesn't understand them: the number of times I've had to field that one in seminars is legion. But my question 'why is he so powerful then?' tended to meet with an uneasy silence, which suggests that possibly empathy isn't everything! This problem is on my mind at the moment and my next blog refers to it. Meanwhile, I can't wait to see the book.

Well done, Kathleen. I too must check out the book!

Thanks Guys! I face the world of male readers with trepidation!

DON'T TREPIDATE. You're a damn good writer and perfectly capable of inhabiting bodies of all kinds. I just read Three -

Having read a couple of your books I have no doubt that you will have done an excellent job of getting inside Norman's skin.

I was just thinking of what interesting party we might have: me, slyly hinting that I as Kelley Wilde was female in order to land an agent...Ruby Barnes doing a sly spin on that...and now you, tapping into the male psyche.

I enjoyed reading your thoughts on this engaging issue. I've written from the male point of view in parts of some of my novels and really enjoy the process. I suppose one calls on the masculine traces in ones's own personality to do this with some effect - just as poets such as Norman Nicholson reach for the female traces in their personalities to evoke not necessarily female characters but female sensitivities. (See! You've made me think as always...)
I look forward to reading the book and commenting on it on my blog. wx