As I came back from my trip to Kansas City last month, on June 18, 2015, I was faced with the horrendous story of Dylan Roof, who had the night before murdered nine unarmed African-Americans as they worshipped in one of the oldest historically black churches in the country.

Roof, a home grown terrorist and white supremacist, allegedly entered the church during prayer meeting, attended services for about an hour, then opened fire killing nine and wounding a tenth. He was quickly identified and apprehended and is currently awaiting trial.

In the aftermath of this tragedy, focus shifted to the Confederate flag flying on the state capitol grounds. See, after the shooting, all flags on the grounds were lowered to half-mast to honor the dead, except for the Confederate battle flag which flies, not on the capitol building, but on its grounds nearby. There were two reasons this flag was not lowered: it was forbidden by law for the flag to be altered in anyway without permission of the General assembly, and more importantly, it was affixed directly to the pole: It could not be lowered without someone shimmying up there and doing it by hand.

Regardless, of the reasons, it looked bad, and once again raised concerns about public displays of the Confederate flag. This picture of Roof didn't help either:

While at the time, South Carolina could not do anything about its flag, retailers quickly sprang into action. Walmart announced fairly quickly that it would no longer carry Confederate flag merchandise due to its being a symbol of racial hatred, followed quickly by eBay, Apple and Amazon.com, among others.


And this is where a horrifying tragedy that had evolved into a long overdue discussion of the inappropriateness of the Confederate flag being displayed on tax-funded grounds devolved into absurdity:

Apple has banned the display of the Confederate flag on all apps, including historically accurate strategy games about the Civil War. EBay has followed suit, though admittedly, its banning-bot could use a bit of a tune-up.

WB next surprised the world not by announcing that they'd be pulling all Dukes of Hazzard merchandise because of the flag on the car, but because no one ever thought they were still producing Dukes of Hazzard merchandise to begin with. Then TV Land pulled those no-harm meaning good ol' boys off the air thirty years after the show had been cancelled, and the absurdity reached new heights.

Thus we come to Amazon. When this story first broke, the internet was afire with rumors that the ban would extend to book covers despite the fact that no official word had been released other than the initial reports of "merchandise" being banned.

As a Southern writer and as a scholar of Southern culture and literature, I watched this new development with a close eye. After all, much of my fiction takes place in the South. I have even, in recent years considered writing a story set during the antebellum, Civil War, and/or Reconstruction eras. Before June 17th, it would be perfectly reasonable to employ the flag on the cover of such a book.

While I support the rights of a private business to determine what it will or will not sell, I feared that Amazon would, like Warner Brothers, fail to take context into account and rely instead on a blind knee-jerk reaction.  However, several quick Amazon searches performed sporadically over the last few weeks have revealed that, at least for now, covers are not affected.

Until I began researching for this very post. Last week, Pennsylvania historian, Michael Dreese discovered that This Flag Never Goes Down, his book discussing the Confederate battle flag's role in the battle of Gettysburg, had been removed from Amazon's virtual shelves. While Amazon has apparently reinstated the book, it is not clear whether this marks a permanent reinstatement or a temporary reprieve until Amazon's August 22 deadline to remove a Confederate merchandise from it's store.

Here's my problem with such draconian measures. Leaving aside the reality that simply removing a flag does absolutely nothing to solve the very real racial tensions in this country other than to provide a palliative Band-Aid to an amputated limb, arbitrarily forbidding an image on a book cover undermines the integrity of both author and audience.

It tells authors that they are unable to determine for themselves what constitutes fair use of an image. There are several instances where the Confederate flag may, in fact, be the perfect image for a particular book: A novel about the South during the War, for instance. Shall we have a boy in gray waving Old Glory instead of the Stars and Bars? Perhaps if there is a story in which the protagonist takes on the KKK, we should have an image of a clansman waving the Stars and Stripes.
Such a policy also tells consumers that they lack sufficient intelligence to tell the difference between a symbol being used for hatred and division: 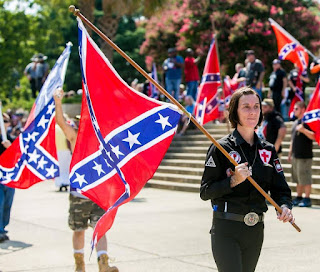 And the same symbol used as literary shorthand: 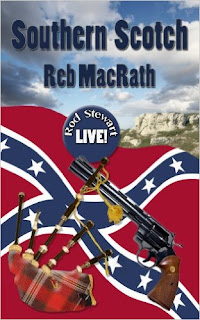 or as a historical reference: 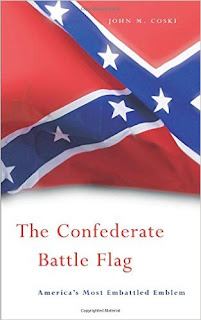 It is also an insult to those who suffered from the tragedy in Charleston: It tells them that their pain and anguish can easily be ameliorated by simply taking some books off a shelf and removing a few video games. Banning the swastika in Germany did not eradicate racism there; dictating what I can or cannot put on the cover of my book without regard for context or authorial intent will similarly not prevent other terrorist killings. Indeed, it hasn't.

similar 'problem' in england with the st george flag. it's just a white rectangle with a red cross on it, but every time i see it outside a house or pub i assume the person flying it does so for racist reasons. always feel like pointing out to them that st george was a turk, and if he'd come to england he'd've been turned away as an illegal immigrant! he certainly wouldn't have been allowed to bring his dragon in...

You know, I lived in the South for close to 15 years--and not once did I think of that flag as anything but a symbol of a lost way of life. I thought of the qualities embodied by the Old South at its best. And it will be a damned shame if the flag ends up completely banished from men's minds. Read Shelby Foote's epic on the Civil War to be reminded of the courage, honor and largesse of soul also represented by a flag that's been revoltingly Roofed.

Jan, some people are also reacting your way to the Union Jack, but I don't see why we should just allow one unpleasant bunch to hijack national symbols - and I don't see why English football and rugby fans shouldn't use the English flag. I gather the US takes flags a lot more seriously than we do in general, we were wearing union jack patterned clothes while I believe it is, or was, an offence in the US to muck about with the stars and stripes. The confederate flag is now pretty much tainted with white supremacist associations and perhaps it would help if it gently faded from the stage. The banning by Amazon etc is a different issue - as basically 'shops' they can sell what they want, and as they'll be using algorithms rather than humanithms to find the flags on book covers, they won't be able to discriminate between valid historical instances or nasty racist gits.

Lydia, I think what the whole world needs more of is humanithms.

no lydia, agreed. i don't think it's in any way important that the st george flag being flown makes me think negative thoughts about the fliers. anyone can do anything they like with their flags is my view. although old glory hardly helps america's racial sufferings at the moment, maybe. but it probably aint going to go away.

Interesting post, Lev, and a point that needs making. In this fast-wired world so many things are a knee-jerk reaction with no attempt to think through the underlying meaning of things.