"The mouth of the River Blackwater stretched wide and blue ahead her. Meresig shone glassily to port and to starboard the long flat line of the St Peters peninsula curved away into haze."

We were trudging through the RYA Yachtmaster syllabus in a Harlow adult education building. Two and a half hours every Wednesday evening through the long dark winter. Our instructor was short and paunchy with a beard that would have qualified him for chief of all the dwarfs of Narnia. He was garrulous and eccentric, self-deprecating, knowledgeable, experienced and kind. If any of us had a problem with our boats George would be down in his van to help or he'd ship along on a tricky passage keeping crew morale high with his vast stock of Flanders and Swan songs. As soon as the RYA course had ended George would be setting off single-handed for the Azores in some converted cockleshell that he’d knocked up on the local canal. 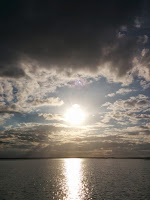 This was the evening of the meteorology module. George was embellishing the facts of the ionosphere and the stratosphere with actual observed phenomena. His account of a mirage shimmering above the River Blackwater reminded me of something I'd seen on that same river. Light and air and water -- the sailor's ever-changing world. That vision stayed in my mind when all the diagrams were gone. It was probably ten years ago.

My heroine, Xanthe sees a mirage. Hers is a full-blown “Fata Morgana” where objects don’t just lift and hover, they invert and transform and fly. It's named for the enigmatic Morgan-le-Fay, King Arthur's troubled half-sister in Malory's Morte D'Arthur. I've allowed myself fragments of an Arthurian sub-text throughout this story. They're mainly for private pleasure, not essential -- though if anyone were to recall Malory's account of Arthur's mother, Igraine and the sleazy circumstances of the king's conception they'll have no difficulty guessing a major element of the plot. Xanthe’s feelings as she watches an unknown sailing boat rise and shimmer and vanish into the distant heat haze are remembered from George's description and my own more ‘normal’ mirage. Though is there ever anything quite ‘normal’ when one is alone very early in a summer’s morning on a river?

(All the photos in this blog were taken in a 24 hour period on the Blackwater and the Colne but I seem to have omitted the blue, calm and sparkly ones.)

I suppose it might be considered an over-reaction to write an entire novel to savour the memory of a mirage. My explicit challenge to myself in Black Waters was to present a heroine who is confident, well-adjusted and blessed with a functioning happy family. Xanthe Ribiero and her sister Maggi have appeared in earlier volumes of the "Strong Winds" series. They have loving, married, professional-class parents and enough money for dinghies and club memberships. When they were children they modelled themselves on Arthur Ransome’s Nancy and Peggy Blackett. Xanthe and Maggi are nice girls, decent sorts – and surprisingly hard to write about. The vulnerable children with the deep-seated troubles and dysfunctional families seized their opportunity to speak out: might the ‘normal’ have nothing of interest to say?

Ransome's Nancy Blackett positively bubbled with ideas and opinions. One of my problems with Xanthe in the earlier books had been preventing Nancy's distinctive vocabulary (“barbecued billygoats,” “galumphing galoots” etc) from bursting through Xanthe's 21st century speak. She's an indefatigable motivator in the Swallows and Amazons stories, but never formally the heroine. Was it her cheerful confidence that persuaded Ransome to keep her on the sidelines or a fear that none of the other characters would get a fair hearing if Nancy was allowed to take full charge? I remembered Jane Austen's Emma Woodhouse "handsome clever and rich" -- a heroine, who Austen expected "no one but myself will much like." Emma's blunders are excruciating as she romps through her neighbours' lives with her sails spread in their crowded anchorage and a fair wind behind her. It's a measure of Austen's strength as an author that she can allow her heroine such appalling mistakes and still keep the reader's sympathy. 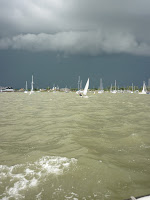 I couldn't quite bear to do that to Xanthe so I knocked her “out of her know” (in the poet John Clare's memorable phrase). I took her away from her home and her family and tipped her into situations where her confidence deserted her and her optimism was challenged. A disaster on the South Coast at Weymouth forces her into exile among the saltings of Flinthammock, a thinly disguised Tollesbury, adjacent to the Blackwater. In literary terms this brings her close to Allingham-land.. My real-life heroine detective novelist Margery Allingham began her writing career on Mersea Island (Meresig) and "Flinthammock" features strongly in her world war two autobiography, The Oaken Heart. Rev Sabine Baring Gould wrote Mehalah on Mersea Island and the Old Hall marshes behing Tollesbury provide the habitat for J A Baker's extraordinary book The Peregrine.

The change of location also knocked me out of my writerly know – away from the Suffolk rivers which I know with the unthinking knowledge of early childhood and into the complex and ensnaring Essex marshes.  Black Waters seems to me to have become a different sort of book: more complicated, more 'researched', with a yearning away from adventure and towards detection that I can only attribute to the Allingham influence. I feel less certain than ever about who, apart from myself, it is written 'for'. I am very glad I wrote it. I am equally glad it's done. Now perhaps I should sign myself up for a photography course!

Black Waters is illustrated by Claudia Myatt and is available as an ebook or a paperback.

Julia, this is fascinating. I'm just finishing Black Waters and will do a review when I have. I don't know that Essex coast well, though our next-door neighbours in Hertford kept a boat on the Blackwater and their son had a holiday cottage there. But I can tell your sense of place is terrific. Thank you for the Arthurian hint. That gives me a completely new level of understanding. Your remarks about Xanthe tie in perfectly with Bill's Tuesday post and the subsequent comments; character is such an endlessly fascinating topic for the writer of fiction. And please keep the Ransome flag flying!

"Black Waters is illustrated by Claudia Myatt and is available as an ebook or a paperback."
And you've gotta read it, believe me!
And I endorse Dennis' thanks for the Morte d'Arthur hint. Makes the book even lovelier. But why does Ms Jones KNOW so much?

Loved it, Julia. It seems to me that every other blog post you write makes me regret having sold my own boat. (On the other hand, a one and a half hour drive to its moorings in Findhorn Bay did make it impractical, however beautiful it was to sail with the mountains of the Black Isle as a back drop.) Needless to say, I've downloaded Black Waters and look forward very much to reading it.

Looking forward to reading this! I too used to sail, and I love the Ransome books - Nancy is such a powerful character, she totally overshadows 'John' - who of course wasn't one of the actual Altounyan children Ransome based S&A on, the eldest was a girl - I seem to recall he used her more for Nancy? Which may explain why John seems rather anodyne and goody goody at times. Of course, even with 'privileged' backgrounds, characters can have problems and 'issues'. I've read that the real Titty was anxious and depressed and had low self esteem as an adult, possibly due to the fact that their mother never showed them any physical affection, so their childhood wasn't as idyllic as it appears in the books. All kinds of magical things happen at sea of course!

I'm looking forward to reading this once I've finished the marathon read for research that I've recently embarked on. Love your sailing books Julia, just as I loved S and A. There is nothing, absolutely nothing, as nice as reading about boats if you can't mess about in them!

Thank you all - I've just got home from a long day John's Campaigning in the North East, before that teaching, tomorrow back to being a carer again and it's only when I touch a book or a boat that I remember who I am. "I need to get down to the sea again to the lonely sea and the sky". I read that to mum on Tuesday and the poor woman collapsed in tears. So I need to get her down to the sea again asap

Aw, wish I'd known you were in my neck of the woods Julia! Poetry can be very powerful for those with dementia.

Excellent Julia, and well done on getting the book launched so quickly. I think it's all the better for being written not for a particular audience but because you wanted to write it - when you have a story in your head it demands to be let out, whether you think it should or not!

'It's only when a touch a boat or a book I remember who I am' - that says it all. If you know who you are, you have everything even if separated from it some of the time.

Julia I'm already well into 'Black Waters' and loving it. From your earlier hints I'd expected Anna to be the key character, so was intrigued to see how you'd unseated Xanthe outside her comfort zone and developed yet another great sailing-oriented novel. You'd be wasted stacking shelves - keep doing what you do so well.