By Elizabeth Kay - July 17, 2015
Well, this is one for a start. Writing a blog post instead of knuckling down to chapter twenty-three. What excuses do you find for not getting on with that book you’re writing? There are all the usual ones, of course. Cleaning, cooking, gardening, exercising – and ironing, if you’re really desperate. The more specialised ones, like re-decorating and car maintenance and keeping up with your social life. The once a year ones, like… no, we won’t go there in case once a year translates in your house as squalor.
And then there’s wildlife.
For me, this is the killer. The frogs in the pond, 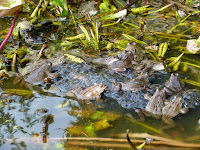 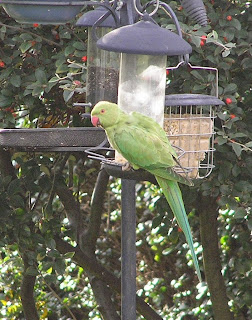 the bird table, the nest boxes, the walks on the common. Two years ago we had great tits nesting a few yards from the house. Breakfast could be taken in the conservatory, watching the action. First of all there was the survey. This was extremely thorough, and involved a lot of hanging upside down and viewing the floor from below, as well as checking every single joint as well as the integrity of the roof. Once a purchase was made, the nest building commenced. Mostly this was straightforward, except when a twig was too wide to go through the hole and needed several attempts at different angles to achieve the desired effect. Once Mrs Great Tit laid her eggs and was sitting on them, Mr Great Tit became very attentive. He’d land on the little perch, she’d pop her head through the hole and he’d delicately feed her a caterpillar. I knew that the eggs had hatched when I heard very faint and high-pitched cheeping. The fact that Bob, my husband, couldn’t hear it annoyed me intensely. I thought he just wasn’t trying until he did a hearing test online which revealed that I had the hearing age of an eighteen-year-old and he… didn’t. 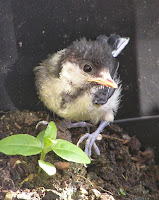 We were lucky enough to be sitting on the patio when one of the babies fledged.   Leaving the nestbox in a downward trajectory, the chick skidded across the top of the water butt and landed in a flower pot. It sat there for an hour before it ventured elsewhere. One of the others made it to the top of the fence, and sat there boasting about its achievement and demanding food for some time.

Bob had been so entranced by the whole episode that I bought him a camera box for Christmas. Last year there were a little interest, but not much, so I changed the angle of the box and this year it was a different matter altogether. Three pairs of blue tits started squabbling over it, and even a starling considered it although it quickly realised that only its head would fit through the hole. We thought the camera was monochrome until we actually saw a tit inside, and the most beautiful bright blue plumage came into sharp focus. The microphone worked a treat, as well, and often it was hearing something that would draw my attention to the fact that one of them was doing yet another inspection. Then there was a period of quiet, when we thought they’d all gone elsewhere. At the end of April activity resumed, and one of them started building. First of all the corners were draught-proofed with moss.

Only the female builds the nest, and things moved on very quickly. She’d put the moss in position, then spread her wings and wriggle so that it pressed neatly down all round. This was followed by an intricate construction of twigs, laid across the corners to form a frame. And then – disaster.

I heard a tremendous squawking, and when I turned to look two blue tits were in the box, going hammer and tongs at one another. Eventually one flew off, but after that the intruder started to remove the nesting material and vandalise everything. It was heartbreaking, and reminiscent of the way we’d felt at a previous house. On that occasion we’d had a nestbox on a garden shed, and there had been some interest from a blue tit. Unfortunately the shed was due for demolition, so we moved the box to the fence. The tit spent a whole day looking for it. You could imagine the thoughts going through its head – I know it was here earlier. Maybe if I come back later it will have returned. And then – guess what, darling, I’ve found another one on the fence which is just as good!
And so this year we have no residents in the box, and I’ve got no excuses. Other than looking for adders on the common, of course. A few years ago I became obsessed with seeing a wild adder because I never had done. Bob and I spent the whole summer traipsing around the south of England at likely sites, only to spot an awful lot of lizards. My daughter then suggested that, on the advice of a friend who was a ranger on our local common, we walk round the perimeter of the heathland bit, and look there. And bingo – a pair of adders. Since then we’ve seen them every year, and become accustomed to their habits. The females tend to stay more or less in the same place (you can identify them by the markings on their heads) but the males are less reliable. They’re great subjects for photography, as they remain still if they don’t spot you. And because they’re deaf Bob and I can split up and yell to one another when we find one. 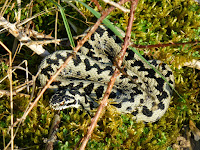 You need to walk carefully, as they’ll detect vibrations, and their eyesight is excellent, particularly as far as movement is concerned. If your shadow falls across them they’re off. But bizarrely, one of the best ways of finding them is by listening. The quick swish as they head back into the undergrowth is diagnostic, and if you wait around without moving they’ll usually come back to where they were basking a few minutes earlier. 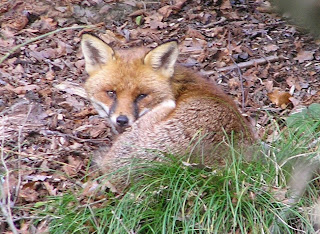 Two years ago, before the council cut down a lot of the bushes by the road, we had our own Naturewatch from the first floor bedroom window. We had a lot of foxes, and a family of badgers right there trotting up and down the road. We don’t live in the heart of the country – in fact, we’re a quarter of a mile from the M25, so this was magic. The king of the road, however, was a large tomcat, who would walk down the middle of the street, tail raised high like a skull and crossbones flag, and everyone else would give way. Times have changed now, and the squirrels seem to rule the roost. 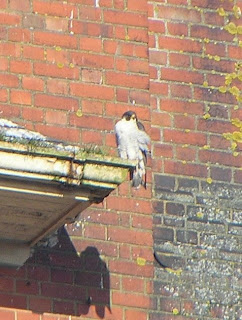 The last of my wildlife distractions is the peregrine nest in the water tower. This requires a good telephoto lens, and powerful binoculars. But seeing dad perched on guard on the roof, and watching the chicks try out their wings makes the ten-minute trip in the car a huge temptation.

Lydia Bennet said…
Lucky to have such great wildlife around you! We've got quite a lot here and I love to watch it. Camera box is a good idea. We have adders in Northumberland, I love them too, and slowworms.
17 July 2015 at 17:35