As we're all writers on this blog, it can't be breaking protocol for me to do a preliminary review/puff for Julia Jones's new book Black Waters. It's the fifth in her trilogy – or rather, it’s volume 5 in her Strong Winds series – and it takes her into ever-deeper waters. For me, it raises the perennial question: what is a children's book?

But first, boringly, I'd better declare a supposed interest. Julia has extremely close connections to Private Eye, and neither of us would relish a knocking piece in that prominent and thrusting organ. Julia is also a publisher, and her imprint Golden Duck publishes one of my own books, Wild Wood.

So, down to brass tacks. Black Waters, like the previous volumes, is an adventure story with teeth, sinews and muscles. Nominally about one girl’s (young woman's) struggle against the unrelenting rivalry of top-level sport, it inevitably confronts racism, greed, and what I fear might be the innate criminality of the ridiculously rich.

Xanthe Ribiero is a black girl of sixteen. She is well-to-do, of professional parents, and British. Many of her closest friends are neither so blessed in their parents or their social position. But all of them have come face-to-face and head-to-head with some of the problems faced by young people in Britain today. The thing that binds them is the area they live in, and the sea. They inhabit that part of the East Coast rising from north of the Thames estuary up to about the River Deben. Xanthe is an Essex girl! Wow!

Significantly, as readers of the other books will know, she is a brilliant, and competitive, sailor of small boats. Not the sort of small boats that I delight in – slow, traditional, and certainly not built for speed – but the modern dinghies that need brain, sinew and lightning reactions. And that would probably drown an old get like me in five minutes flat.

(For the inquisitive among you, my sailing boats are a standing lug fifteen-footer and a pocket gaff sloop. Oh, and I have a Mirror dinghy, which you obviously know is sliding gunter. Fast? You would not believe it!)

Xanthe, as I said, is driven and superb. Black Waters opens with a trial competition that could ultimately lead her to a place in the Olympic team. She has a state of the art Laser Radial provided by a willing sponsor, and the selectors are watching.

But she is up against all sorts of people for a place in the Olympic team. And one of them, a beautiful young lady called Madrigal, is as determined to win as Xanthe, and ruthless with it.

Now, I've only ever heard the term 'sledging' and had no real idea just what it meant until I read this book. Madrigal is immensely rich; Xanthe is not. Xanthe’s boat is pretty damn hot; Madrigal’s is to die for. Most useful of all, in the sledging game, is the fact that Madrigal is white, and honey blonde, and slim. Xanthe is black; and not.

Try this for starters: 'you must feel the cold terribly,' she added, turning to Xanthe. 'I expect you need thermal undies even in our English summer!'

It gets better, and with each turn of the screw the emotional effect on me, as a reader, is greater. Within a very small number of lines, Ms Jones had me gritting my teeth with hatred.

Madrigal, by voice and action, manages a superb job of unsettling, and Xanthe is well beaten in the race. But not enough for Miss Superior.

'When I saw you struggling out there… I couldn't help wondering whether you'd ever thought how much it would mean to your own country if you elected to sail for them instead? Wherever it is in Africa that you originally come from… I'm so completely hopeless at geography. They probably haven't even got a sailing team! Rig a bathtub and you’d make it unopposed. You'd be a national heroine. Your own tribe!'

What happens next is not pretty, and it leads poor Xanthe into a sort of exile. She is kicked out of the team and ends up trying to rehabilitate herself by helping some genuinely disadvantaged children to learn how to sail and how to survive. But as in the earlier books, an uncaring and malevolent outside world refuses to leave well alone.

The environment is also under threat as a giant corporation bids to put this quiet, wildlife-rich semi-wilderness to better (ie more profitable) use. Madrigal’s inhuman tactics redefined as an institution – with genuine criminals dangerously involved.

The sense of place is extraordinary. This lonely east coast of England, half deserted and forgotten now, was a cradle of war and the threat of invasion throughout hundreds of years of history. It is also mysterious, ghostly, and often magical in a palpably unpleasant way. Xanthe struggles with prejudice in many forms, and it is the deprived and suffering children who help to get her through, as she helps them.

Although I've written many children's books, I no longer read them regularly. This book is very dense, very rich, and very complex – but is it for children? My rule of thumb was always that if I could understand it, then so would a child – even if they had to work hard in places. This story is about children, adults, culture, greed, great kindness and great cruelty.

Like Arthur Ransome at his best, it is adventure tinged with darkness. I think it's wonderful.


As on several times before, my ebook publisher Endeavour have sprung it on me. When I got back from sailing on the South Coast I discovered the first of my historical naval novels, A Fine Boy for Killing, was up on Kindle. The other three in the series will follow soonish. 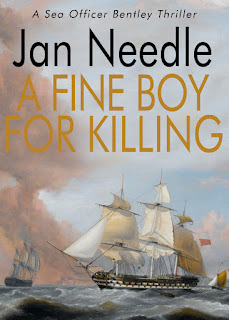 I started writing these books as a sort of antidote to the genre that casts a young and charmingly beautiful midshipman in the Nelson mode, developed over several books. My hero, William Bentley is indeed young and handsome, but he seems destined to become a dangerous and unpleasant officer - a fine boy for killing, indeed. Hornblower with a taste for blood, as an earlier reviewer put it.

Another called it ‘Jack Aubrey with the gloves and rose-tinted spectacles torn off.’

For what it's worth, I think it's probably the best piece of sustained fiction I ever wrote. And, folks, it's now yours for £2.99! Eat your heart out, Harper Lee!

I've just started reading Black Waters, too, Jan. Unsurprisingly, my reactions were identical to yours. For all Madrigal's nastiness, her put-downs are exquisite - nasty, yes, but perfectly formed. I hope, when she gets her come-uppance (as she surely must), that her gift for sledging remains intact. I wish we had someone like her facing Cameron at Prime Minister's questions - but, of course, she'd be a cheerleader for him.

anotehr of the beauties of julia's book is that madrigal doesn't get her comeuppance in the expected way!

I've just posted a review of Julia Jones' splendid book on Amazon UK and US, so you can read my opinion there! I hope you'll be posting this on our usual review site Eclectic Electric, Jan, as well as on the river mightier than Blackwater!

A fine appreciation, Jan, every word of which I agree with. It is indeed a tough book and Julia has a genius for portraying pure evil, which she's already shown in the Strong Winds sequence from The Salt-Stained Book onwards. Like you and Bill, I was creased up with anger at Madrigal. I could hear her speak: I could recognise her particular brand of vitriolic nastiness and utter vindictiveness. And this capacity for evil is not confined to Madrigal's devilish articulacy. It spreads into society generally: the Essex coast and the corporate future it seems destined for become a metaphor for our whole society. It dramatises your estimate of 'the innate criminality of the very rich', proving that it's an opinion which the last years have shown is spot-on. Spoiler alert, Bill. Madrigal does get her come-uppance, in a way which you'll never forecast but will give you great satisfaction. But also it's a brilliant mystery story. Also it's got unforgettable episodes of extreme danger at sea countered by exceptional expertise. Potential readers who don't know what to expect can get a taste of this in Julia's short story in Flash in the Pen.

Forgot to say, Jan. I'm so glad A Fine Boy for Killing is available again. I won't go so far as to say that it's your best sustained fiction: it has too many rivals for that distinction. But it's a marvellous book - and once again, here's yet another echo of the greatness of Pam Royds and the pusillanimity of publishers today. Would any children's editor accept a book like that nowadays? They wouldn't have the guts.

Thanks Dennis. And Pam only took it off me because she didn't want me to go anywhere else, although it's certainly not a children's book, of course. Her 'excuse' was that the 'hero' only had an emotional age of about forteen when the book starts. By the end of it, he's as old as Methuselah!

Thank you ALL. I've been John's Campaigning all day and have so much more to do I can't imagine how I'll ever reach a river again. However I allowed nmyself a moment for a blissful cup of coffee, turned to AE for R & R -- ad this is what I find! Bally marvellous. You are such good friends.

Oh hell! I've just gone across to the Amazon site and read what's there and now I've got a sniffy nose and tears in my eyes. If I could tell you the despair I've felt over this book...

Also reading it Julia... You shouldn't doubt yourself... It's great. I'm sure the difficulties of writing it are more tied to life events... You certainly haven't lost the skill! And jan... I won't rise to the bait of commenting on the emotional age of the hero... Or author? Oops, that's me being pushed off the roof!

Hallo Cally, and George, and dawgs. Love from the south!