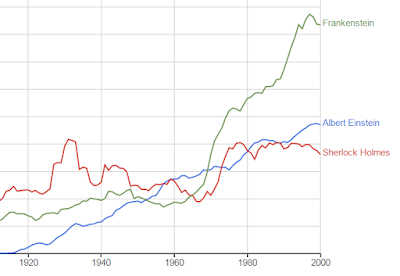 Displacement activity! This is something many writers know only too well. It can take many forms but its purpose is always the same and you don’t need many guesses to know that’s to avoid writing.

However, I’m not going to discuss all the forms that displacement activity takes, I want to tell you about a new one I found.

I’ve talked before about MOOCS the online education courses provided by FutureLearn. Well, I enrolled in Literature in the Digital Age, which is quite interesting, even though it talks about poetry a lot. As you know, poetry is not my thing.

The course could be called displacement activity but I prefer to think of it as education. But it introduced me to an analytical tool which is perfect as a displacement activity. This tool can make comparisons between anything book related that you like, and if you want to try it out it’s called Google Books Ngram Viewer. You’ll also find an information page here. Please note that the search format is word,word,word or phrase,phrase,phrase with no spaces after the words and no spaces at the end of phrases. 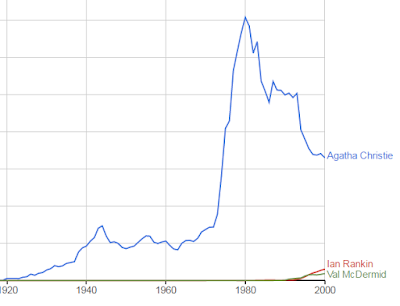 My first trial shot was to compare Agatha Christie with Ian Rankin and Val McDermid, my assumption being that the modern best-sellers would be more popular. I was totally wrong, Agatha Christie beat both of them in the popularity stakes by a really large margin. 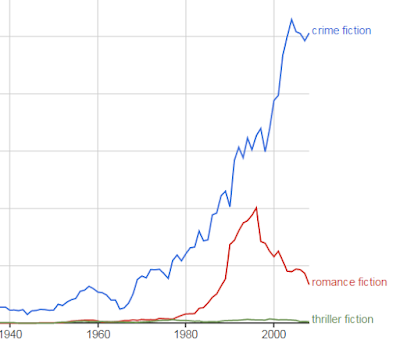 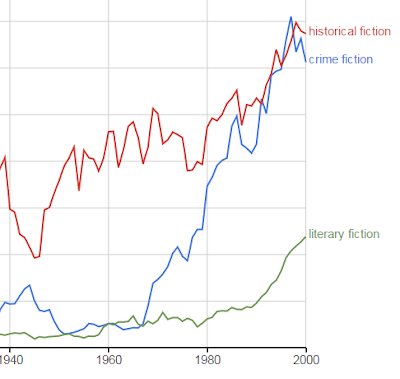 So, let’s look at the results. Historical fiction ranked the highest, closely followed by crime fiction. Woohoo, that’s what I write. Thrillers, which I assumed would rank high were grovelling at the bottom of the graph while horror fiction and dystopian fiction sank right to the bottom. And literary fiction ranked higher than fantasy. Now who would have thought that? 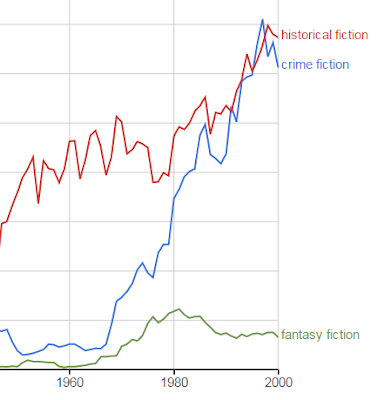 There are loads of other genres I could have compared but you can only take displacement activity so far, and I was quite pleased with the results. It means I’m not wasting my time writing contemporary crime and historical crime fiction.

Why don’t you give the tool a whirl and see where your genre sits in the popularity stakes?

Catherine Czerkawska said…
Well I'm REALLY happy about the historical fiction, Chris - but what a fascinating post. And I really must have a look at MOOCS as well.
19 May 2016 at 09:28

Bill Kirton said…
You've stolen my thunder, Chris, because my next scheduled post is on the subject of DAs, too. But since, as you know, my genres are also crime and history, you've done the work for me in this (fascinating) post. Thank you.
19 May 2016 at 11:33

Nick Green said…
If I had my way, they'd just keep all the books on one shelf and throw all those 'genre' labels in the bin.

Actually, that's why I like children's fiction. Because that's exactly what they do there. You get 'His Dark Materials' in the same section as 'Tracy Beaker' and no-one complains.

I bought Birdsong and Amazon kept trying to flog me books about the Great War and military books and so on. It wasn't the war I bought the book for, it was the writing.

I bought Wolf Hall and now they keep trying to flog me stuff about Henry VIII. The whole basis of genres is fundamentally flawed. I'd rather ignore it.
19 May 2016 at 14:10

Lydia Bennet said…
Thanks Chris, that looks very interesting - though as a mathematician I can't help wondering exactly what the vertical axis represents - number of book sales?I see Christie has had a huge upsurge in relatively recent times, would this be because of all the TV adaptations I wonder? Have ebooks had an impact, if the sales are counting both kinds of book. However Agatha did have an advantage over Val and Ian, though she was brilliant and so were other golden age crime writers, they had far, far less competition, so her status rose higher more easily than modern writers' - and so she has the promotional effect of previous sales, as happens with those who got ebooks going just as they took off, before the floodgates really opened, and who are still reaping the benefit.
19 May 2016 at 15:16

Chris Longmuir said…
Thanks for all the interesting comments. I notice that Agatha Christie is now more popular than she ever was in her heyday. The peak of her popularity seems to be the 1980s and she is still selling lots more than she ever did in her lifetime.

As for binning all the genres and having all the books on one shelf, it would have to be a terribly big shelf, and how would you ever find what you were looking for?
19 May 2016 at 18:20