By Leverett Butts - May 23, 2016
Well here we are. We have finally reached the end of my countdown of metafictional comics, and it only took nine months to do it. Yes, there are children being born this month who were conceived on the day I began this outting.

There have been some sidetracks, meanderings, and just plain random laziness, admittedly, but we have at last gotten here. If you are like these kids, you may want to check out the previous list first:

You could start with the honorable mentions, then move on to

5. Cerebus by Simms and Gerhard

4. The League of Extraordinary Gentlemen by Moore and O'Neal

3. Sandman by Gaiman and various artists

2. Fables by Willingham and various artists

On the surface, The Unwritten seems like a conscious rip-off of both Harry Potter and Neil Gaiman's comic The Books of Magic. Like these two previous works, The Unwritten involves a dark-haired, bespectacled youth who is unexpectedly chosen for a magical adventure because of his latent magical abilities. However, in this story, the boy wizard, Tommy Taylor, is a character in an eponymous children's fantasy series within the series.


The comic book, however, follows the story of an adult Tom Taylor, who was the child of theauthor of the Tommy Taylor novels, and the model for the boy-wizard character. Tom makes his primary living as a jaded and semi-belligerant convention guest discussing the work of his missing and presumed dead father and begrudgingly signing copies of the novels. He claims to have never done anything with his life because of his father's work and believes his only real talent to be an encyclopedic knowledge of what he terms "literary geography": the real-world cognates of literary settings and/or other places of literary importance (where important writers were born/lived/died or where important works were written).

On one level, The Unwritten owes more to the life of Christopher Robin Milne (the son of A. A. Milne and the template for Christopher Robin in the Winnie the Pooh books) than it does to Harry Potter, though. Tom, like the real-world Christopher Robin, resents his father for his perceived lack of a childhood due to his being constantly confused with his literary doppelgänger. On this level, the story works as a metaphor for the (not always positive) ways in which literature can alter or overtake our lives.

However, as with the other entries in this countdown, the story here works on several levels. Mike Carey, the creator of the series describes The Unwriten as "a story about stories." This is both a literal and a metaphorical description. Many literary texts play important roles in the story: The Tommy Taylor novels, for example, were written in the Villa Diodati, the same mansion in which Mary Shelley wrote Frankenstein. Additionally, Moby Dick, the Just So Stories, The Song of Roland, and Gilgamesh all play important roles as the narrative unfolds.


More importantly, though, the 1925 novella Jud Süß illustrates how The Unwritten is both literally and metaphorically a story about stories. At one point Tom and his friends find themselves trapped in the world of the 1940 Nazi film adaptation of the novella. Originally, the novella told the sympathetic story of a Jewish banker and his suffering under anti-semitism. In the hands of Nazi adaptors, however, the 1940 film became one of the most effective pieces of anti-semitic propaganda. Carey's use of this film as a setting, then, becomes a meditation on not only how literature can change the world, but on the dangerous ways in which the world can change literature.

This theme of the interconnectedness of story and life is implied from the very beginning. As the first volume of the series progresses, we learn that there is more to Tom's story than even he is aware. Tom is quite possibly the living manifestation of his father's fictional creation. In other words, he may, quite literally, be his father's words made flesh. Seriously, this 71 issue comic almost literally encompasses all of Western literature and more. And what it doesn't incorporate, Fables does, and The Unwritten has an entire story line that takes place in the world of Willingham's comic so....

In short, this book is about it all: how stories are important, how stories come about, how stories change us, how we change stories, and how we are inextricably bound into our own stories. It incorporates every individual thing I liked about entries 5-2 of this countdown, and even the things I liked about the honorable mentions, and wraps them all in one neat package. How could there ever be a different #1? 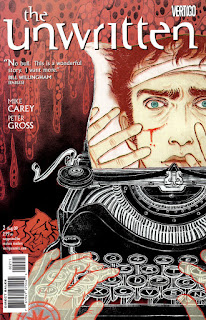 Next Month: Not another countdown, but beyond that I honestly have no idea. I'm sure I'll think of something by the 22nd. See you then!