A visit to the Edinburgh Book Festival - Wendy Jones 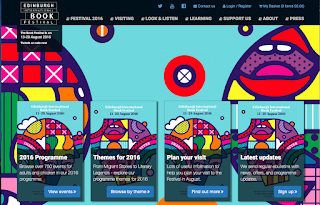 It is that time of year where the Edinburgh Tattoo, The Edinburgh Fringe and The Edinburgh Book Festival all come together to bring culture, excitement and to one fantastic city. Yesterday I took the train through to Edinburgh for The Book Festival and what a great day it was. It didn't start too well as I left at 8.30 am and the coffee shop at the station was closed. So there I was, an early morning, no coffee, and a packed train. However, I got speaking to a delightful family and ended up singing and playing games with two little girls. That made up for the lack of refreshment at the station.

This was my first visit to the book festival and wasn't sure what to expect. It is held in Charlotte Square gardens and the organisers have made it into a glorious small village, all dedicated to books. I was there with the Society of Authors in Scotland and spent the day in the Bookshop. The place was packed and it made this writer giddy with delight to see so many people buying books. We were tucked up in one corner and I could see all the bookshelves laid out before me. Every possible genre was represented with, of course, a strong Scottish flavour. Did I buy some books, you can bet your granny I did. I bought a couple of mysteries, one contemporary and one historical, by authors called Denzil Metric and the other by David Ashton. Both were Scottish of course.

It was also lovely to chat to people on the Society of Authors in Scotland stall. Not all were writers but it was still nice to get to know them. I spent time looking at what people were buying. I also got to know more about several fellow authors. What a talented bunch and I love the sound of their books.

I enjoyed getting to see the festival from the other side, that of a writer. It brings to life why we write seeing the excitement and enjoyment on the faces of those coming to hear the authors. There are a number of authors talking throughout the week. If you are able to get to Edinburgh then it is well worth coming to hear them. I would recommend a visit to the book festival for all authors and readers.

If you would like a free copy of DI Shona Mckenzie's Guide to Killing Your Boss then please visit the Home of Wendy H. Jones

Wendy H. Jones lives in Scotland, and her police procedural series featuring Detective Inspector Shona McKenzie, is set in the beautiful city of Dundee, Scotland. Wendy has led a varied and adventurous life. Her love for adventure led to her joining the Royal Navy to undertake nurse training. After six years in the Navy she joined the Army where she served as an Officer for a further 17 years. This took her all over the world including Europe, the Middle East and the Far East. Much of her spare time is now spent travelling around the UK, and lands much further afield. As well as nursing Wendy also worked for many years in Academia. This led to publication in academic textbooks and journals. Killer's Countdown is her first novel and the first book in the Shona McKenzie Mystery series, followed by Killer's Craft, Killer's Cross and Killer's Cut. Her debut Young Adult Novel, The Dagger's Curse, will be published on 10th September 2016.