As the sun was shining on the south coast and things were grimmer than usual in my part of the North, I took myself down to Portsmouth to see what the old town looked like since I left.

For the first three days of my visit, the weather was not much better. A succession of cold fronts sweeping down from the North West, most of them carrying  rain, all of them redolent of the snowfields of the North. August for God’s sake. It felt like March or late November.

The town itself was much as I remember it. I have never known a place that I was more grateful to leave, which I achieved when I was twenty years old. I moved from the Portsmouth Evening News (the News, as it is now more trendily named) onto the Daily Herald, and discovered a whole new, bright new world.

A world of clubs, and drinking, national stories that made much of my work in Portsmouth seem trivial, and Northern girls who seemed to me vibrant, sharp,  sophisticated.

I realize now that I was the unsophisticated one, and remain so, in many ways even today. But Portsmouth still seems lost in a race to mediocrity. It’s ugly, desperately poor, and reeks of violence.

All seaports, I have learned over the years, are different from most other places. Portsmouth was/is a naval seaport, and has suffered more than most. The dockyard used to employ 20,000 men (I was always told), most of whom cycled. At 4 o’clock each afternoon, if you were in the wrong street, you would be overwhelmed by a flood of men on bicycles. Hell for leather had nothing on it. It was a tsunami.

Now, give or take, the dockyard is asleep, an unemployment desert. It has the heritage, it has Nelson’s flagship, it has the Mary Rose, it has the Warrior, it has museums and trips around the harbour to see the vanishing handful of warships we have left. Stand outside even the main gate at 4 o’clock on any afternoon, and you won’t be run over by a man on a bike. You won’t be run over, period.

I suppose there are industries in Portsmouth still, and around the top end of Portsea Island there is definitely a smattering of high-tech modernity. And in the summer months – please God for Portsmouth this summer finally arrives in earnest – there is the holiday industry.

There are beaches, there are the fun fairs, there are the ice creams, there is the sea. There used to be, all along the front, the yellow vans that sold Verrecchia’s delightful ice cream, a true local industry (we pronounced it Vereesha’s) whose product over the years won many prizes.   Then the council sold all the pitches by auction to the highest bidder, and Verrecchia’s  vans are rarer than hens teeth. You want Mr Whippy and all his cousins? You got him. You want heritage? Ho bleeding ho.

In my memory, Pompey was always a dog-rough place. I sometimes wonder if my reaction to it as a child was not what set me on my course of writing grimmer than the average books for children.  The first one, Albeson, tells the story of a slum kid who is almost driven to the bad, and saved from disaster by the kindness of Germans.  Since Brexit, I can only live in hope!

But because of the Sea Scouts, it also gave me my enduring love of the sea and sailing, so I’ll never be able to give the place up completely. My sister still lives here, and her husband Eric still looks after my gaff-rigged sloop Badsox. We had a wonderful day out yesterday, and expect more tomorrow and the next day.

On Sunday, I will be meeting my first long-term girlfriend for a catch up. She, like me, got out as soon as ever she could and, like me, rarely returns. 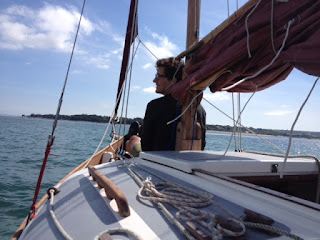 When we meet at a mutual friend’s house on Sunday, I must ask her. What is it about our dear old home town Pompey? Was it really such a dump, or was it us?

Sort of PS. On Saturday, son Matti came down from London, and we had an entirely idyllic day sailing to the Isle of Wight in glorious sunshine, with perfect breezes. Didn’t see any signs of inbreeding, either. Make of that what you will!

Jan Needle said…
PPS Had a brilliant reunion with former girlfriend June and mutual friend Sue (and Sue's husband Bri) and talked ourselves insensible. They both worked on the PEN, and our store of remembered friends and adventures was amazing. This morning the sun is blazing, the boat awaits. And I'll be on a train to Manchester. Life's confusing, ain't it?
15 August 2016 at 08:09

Wendy H. Jones said…
I spent several years living in Gosport in both the Royal Navy and the Army. I loved Portsmouth and all the history associated with it.
15 August 2016 at 08:58

JO said…
I used to do some work in Pompey - and it always struck me as a place that didn't quite know what it was for any more. And that has a knock-on for the people who live there, some of whom have been there forever and profess to love the place but can't quite say why.
15 August 2016 at 10:08

Dennis Hamley said…
Have been away for two days so only saw this on Wednesday morning. Jan, what a lovely eulogy/threnody for that strange, ambiguous city. Our dear old friend Jim Riordan would have loved it.
17 August 2016 at 11:37