Humour: taking things beyond their logical conclusion… by Elizabeth Kay 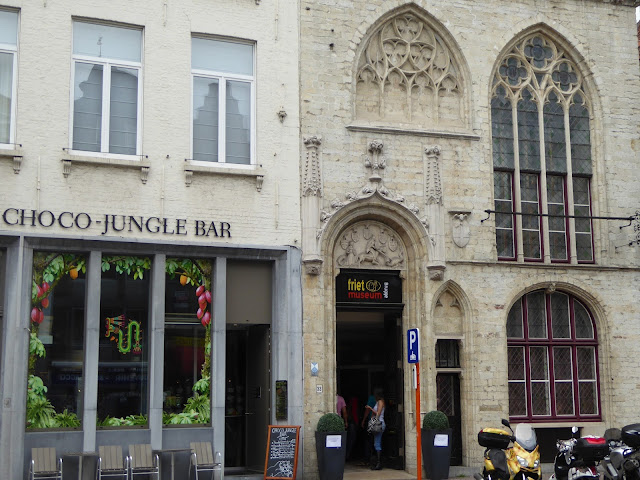 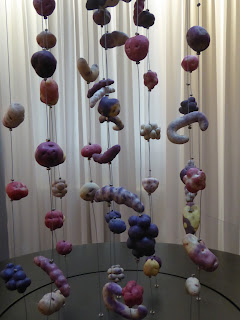 I’ve just visited the Chip Museum in Bruges. Sounds utterly ludicrous, doesn’t it? How can you have a whole museum devoted entirely to that very Belgian food item, the chip? But you can – and I think this is one of the secrets of humour, when you take something way beyond the obvious.
The Chip Museum starts off the way you’d expect, with the history of the potato and a delightful display with potatoes of every shape and size and colour suspended in mid-air. Then there’s the fascinating topic of freeze-drying, the invention of the chip (with crisps as a by-product) and the correct way to cook them; oils or fats? And just when you think the place must run out of steam, there is a whole host of chip-cutting machines. Every sort of fryer you’ve ever thought of, and more besides, and the dinky little stalls that have sold them through the ages with their candy-striped canopies or corrugated iron roofs. Lots of cartoons, with baby chip asking daddy chip interesting questions. Fried potatoes around the world with accompanying recipes, not forgetting the chip butty, and medicinal uses of potatoes.
Many years ago someone came up with the bright idea of producing a spoof women’s magazine, which was called Bitch. It was enormously good fun, and attracted the likes of Jo Brand to its list of writers. Unfortunately it didn’t last very long, as it was colourful and glossy and very expensive to produce. But whilst it was in production, I did several pieces for it which worked on the same principle – take an idea, and then push it as far as it will go and then beyond. I do think that this is one of the best recipes for humour, which is notoriously tricky to write and doesn’t travel well. Nonetheless, exaggerations such as Monty Python’s Ministry of Silly Walks and all the characters in Black Adder have stood the test of time. 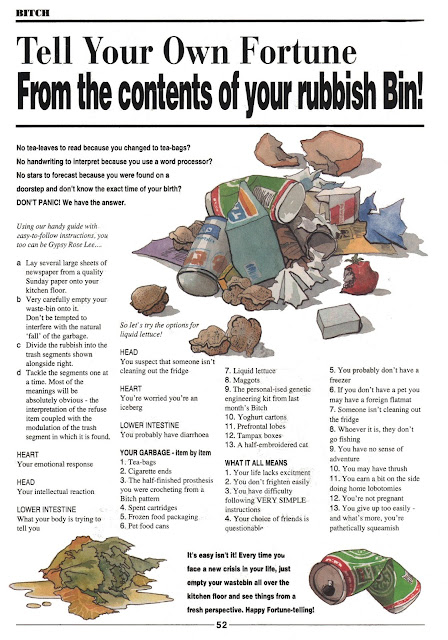 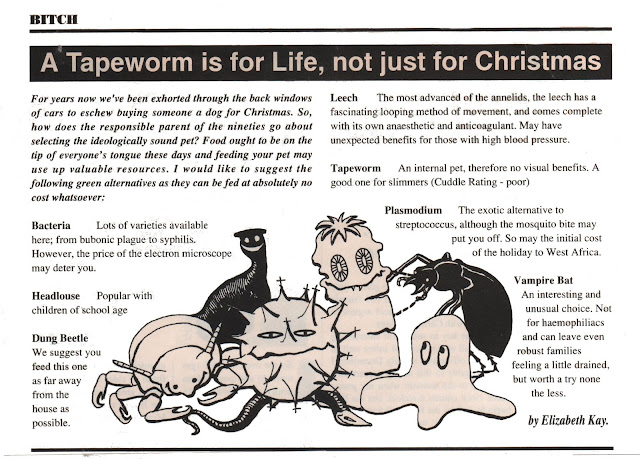 The novels that Tom Sharpe wrote,  that were set in South Africa – such as Riotous Assembly no longer work as well in my opinion because the make-up of the society in that country has drastically changed. His African books are very much of their time, and the racism seems far too exaggerated although I don’t think it was very far from the truth. It was, of course, done for comic effect and in the sixties had a lot of important things to say about Apartheid which seem unbelievable today. Blott on the Landscape, on the other hand, still works because the issues haven’t really aged as much.
The only humorous adult novel I have written was shortlisted for the Dundee International Book Prize, and works on the same basis – take a stereotype, and then go for the jugular. Four poets go on a cultural tour of an ex-Soviet republic, and end up in all sorts of trouble.

“Ah.” There was another long silence. Then Gregor looked at Sybil and said, “You Sybil Batur? You write poem about man who was killed with knitting needle?”
Sybil nodded. It was the poem everyone knew, the one about the wife who killed her husband whilst knitting him an Aran sweater. She’d thought about making it Fair-Isle, for the colours and the irony, but she knew it wasn’t right, so she’d stuck to a nice chunky cable, in beige. No one ever remembered her serious poems about drug trials that went wrong. No, they just remembered the knitting. “What about it?” she asked cautiously.
“Is not possible, killing someone with knitting needles. They bend.”

Poets are, of course, a very good subject for parody. You do need to know something about the subject matter for a parody to work, however, so in my book some knowledge of the poetry world is beneficial though not essential. Cold Comfort Farm, one of the best parodies ever,  doesn’t need detailed knowledge of the writing of Mary Webb or the pastoral novel to succeed. But it does make it that bit funnier.
Bitch Black Adder Bruges chips Cold Comfort Farm Monty Python Plasmodium tapeworm

Bill Kirton said…
Thanks, Elizabeth, this triggered memories for me. I think reading Tom Sharpe may have been one of the things that started me thinking of moving from drama to the novel - his South African ones rather than the Wilt series. I've written lots of short stuff, one novel and one novella which were all supposed to be funny, and what always strikes me about writing comedy is that I got a lot more fun out of it than readers ever will.
17 August 2016 at 09:17

Umberto Tosi said…
Thank you for starting my day with a good laugh and my mouth watering for strange chips skewered on a knitting needle. Of course, we call them fries in the States. I can't think of any Fries Museums here. Fries or chips: they're tasty, but not as piquant as your posting. I go for sweet potato chips myself. I'm going check out that Belgian museum online.
17 August 2016 at 13:15

Catherine Czerkawska said…
Cold Comfort Farm is one of my very favourite novels - I have to reread it from time to time just to remind myself of how brilliant it is. I made another attempt to read Lady Chatterley a few years ago, but with the sookbind and Seth et al coming irresistibly to mind it was impossible. My other favourite comic novels are Diary of a Nobody and the wonderful spin-off by Keith Waterhouse, Mrs Pooter's Diary - both still make me laugh at the umpteenth reading and I don't usually like spin-offs, but Mrs Pooter is perfection. Also all the Lucia books by E F Benson are fine examples of comic exaggeration - and yet we love Lucia and Georgie, don't we? Also Richmal Crompton's William. I cherish William's Truthful Christmas in particular and bring it to mind if I'm feeling down. Thanks so much for reminding me of these books. I've had a bit too much grim fiction of late - need something to make me smile.
19 August 2016 at 15:30