Naming your Beasts - by Jan Edwards 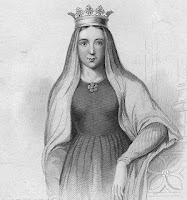 Names are one of the biggest problems for me with any writing.

Names matter. They attract or deflect by their very nature, colouring our view through our own personal experience. A character names Maude for example may conjure an older woman, possibly Victorian fiction as Maude was a daughter of the old Queen. Or a very much older Empress Maud who was an ancient claimant of the English crown.
I recently had birthday notifications on the same day, via Facebook, for two Michaels. One is generally known as Mick and the other as Mike. They are both thoroughly nice guys but possessed of very different personalities, and I would never address Mick as Mike or vice versa. Why they should have gained their separate diminutives is unknown. They are of similar age and, one assumes, similar background. Is it regional? A possibility. I don’t expect I shall ever know. But the point to be made is that in my  mind they are their name.

Which brings me back to fictional characters.
When applying names to an invented persona I suspect most people reflect on people they know with similar names. Or else names that reflect the era in which I envisage them being born.
I will often gauge the date of birth for a given character and web search for popular names used in that specific year/decade/century.
Problems arise when the wrong name is chosen. In writing a recent novel I was half way through and beginning to have issues with my leading lady before realising that her name did not suit the personality she had taken on. Change was required and once that was done writing about her was suddenly so much easier.
Naming your book/story is another matter. I freely admit that this is a personal bete noir. If the title does not come to me within a few minutes it can take a long time coming, but that is another blog entirely!
authors electric jan edwards naming characters writing tips

Chris Longmuir said…
I know what you mean, Jan, but sometimes characters choose their own names. When I was writing Dead Wood I named my lead female character Joanne, because I like the name. Halfway through the book, I realised I was writing Louise. I didn't choose Louise, and I don't know where the name came from. But, at that point I had to make a decision, was she Joanne or was she Louise? I gave in, she evidently chose the name herself so she became Louise. Good post.
19 August 2016 at 06:50

Wendy H. Jones said…
This is so true. A character's names has to tick all the boxes, social, cultural, historical, geographical, I'm sure I could find a few more 'al's if I tried. Great reminder. Thank you
19 August 2016 at 06:53

Lynne Garner said…
Agree totally. In one of my picture books the character not only changed gender but I spent a fair few hours searching the web for just the right name. Once I did find 'the' name the spelling of it was changed by the publisher.
19 August 2016 at 08:50

AliB said…
I agree - a name can make or break a character for the reader but also for the writer. I once had a romantic hero who just wasn't doing the business. As soon as I changed his name he came to life. I'm reading some contemp women's fiction where some of the names strike me as a bit bizarre - I'm wondering why we need these people in the book at all :(
19 August 2016 at 17:36

Umberto Tosi said…
Ringing bells here: I have four grown children and naming each of them - with all the baby name books and discussions - was easy compared to naming characters in any given story I start. Often I have to go with a place-holder name, but that never works for long because the right name conveys the essence of a character, while a generic name impedes its development. After all the searches are done, it still boils down to picking a name that feels absolutely right. Thanks for another thought provoking post, Jan.
20 August 2016 at 06:33

Jan Edwards said…
Thank you for all your comments - I have changed names of characters many times because they did not fit. Glad to hear I am not the only one!
21 August 2016 at 16:18