The Good, The Bad, and The Ugly: Lev Butts Discusses Negative Reviews

I recently had the first two novellas of my Arthurian Western, Guns of the Waste Land, picked up by Venture Press over in the U.K. for release as a single ebook. This has made me understandably excited as it is my first foray into traditional publishing (although to be fair, both novellas were picked up by Hold Fast Press, a co-op press in Long Beach, California, for publication as paperbacks a few months prior, they just haven't come out yet).

One of the biggest benefits of traditional publishing, I have found, is promotion. While I have had some modicum of success promoting my work as a self-publisher, there is only so far I can go on a fixed and meager budget.


Venture, though, was able to do quite a bit for me in that department: they gave the book a free give-away, then kept it at a reduced price for a few weeks to drum up word of mouth. They then blasted the Twitter-sphere with seemingly nonstop tweets directing readers to my page on Amazon, and encouraged all who downloaded the book to write a review.

Now as we have said many times in this group, reviews are the most important thing a reader can do for a writer. Yes, just as (if not more) important than actually buying the book. That's why we have free and reduced give-aways periodically. Your review literally helps us get our books seen by others, especially on sites like Amazon and Barnes & Noble.


And Venture Press did me proud, I have to say. While the first volume of Guns of the Waste Land had languished around nine reviews for a couple of years, within weeks of Venture's promotion push, I had garnered a whopping 61 reviews and they are still trickling in.

Most of them have been positive reviews, and I am glad. I'm certainly glad to read them and feel good about my abilities as a writer. However, there have been quite a few negative reviews as well, and that's what I want to talk about today.

Admittedly, while we love to read positive reviews about our books, there is no real difference in good or bad reviews when we are looking for exposure on the bookseller websites. The higher the number of our reviews (good, bad, or indifferent), the more chances we have of showing up on someone's suggestion list if they are buying a book in a similar genre or style.

That being said, though, negative reviews can be hard to take, regardless of how much they are outweighed by the sheer number of positive reviews. Ernest Hemingway once slapped a critic in the face with a book because of a bad review. Isaac Asimov claims that writers fall into one of two groups: "Those who bleed copiously and visibly at any bad review, and those who bleed copiously and secretly at any bad review." I tend fall into the latter category.

Many authors opt not to read their reviews at all or at least to avoid the bad ones, lest the experience sink them so far into the morass of self-doubt and despair that they never pick up the pen again. However, I think that most of us can't help ourselves and, like trying not to look at a a car wreck, we cannot stop ourselves from taking a peek.

This article is for those folks, my people. The writers who work a bad review like a mouth ulcer or a bug bite scratched until sepsis sets in. Even though we know we will regret it, we read the critique and worry over it for days.

Well I am here to help. If you're going to read the negative review, you may as well understand them. Bad reviews fall into three categories and you need to know how to handle each of them.

Believe it or not some negative reviews can actually be a good thing. Statistically speaking, having a some one- or two-star reviews actually helps your sales. If everything is four- or five-stars, a reader might be dubious, and suspect the reviews are from friends, family, or others who have a vested interest in making a sub-par work seem fantastic. Not every reader is going to love your work because not every reader's interests are your interests. Having a few negative reviews, then, gives a reader a more well-rounded view of a works strengths and weaknesses.

As a writer, honest, well-thought out reviews can help you in your craft as well. If something doesn't work for a reader, and more importantly doesn't work for several readers, it may be something that you need to tweak for your next project (or in the case of self-publishing/print-on-demand, something you may consider for updating the files).

Take for example the following negative reviews of Guns of the Waste Land: 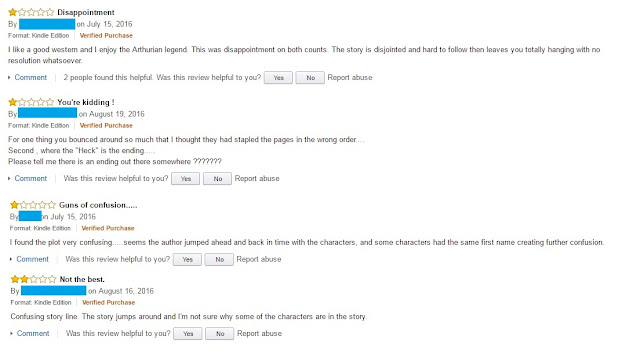 It's clear from these, that my non-linear story-telling was confusing for some readers. Admittedly, this style was a virtue according to some of the positive reviews, but what I may want to consider in the future is making the transitions to other story lines more clear and smoother.

Or take this one:

While short, this review gives me a legitimate complaint that I can address later. If I'm writing a Western, I may want to consider more action scenes. While I may ultimately decide that the balance I have established works well, this review at least gives me something to consider for my next volume.

These types of reviews give you food for thought, so the best thing to do is consider the ideas presented and decide for yourself how much of them to internalize.

Unfortunately, not all reviews are as helpful as these.

Some reviews attempt to be constructive, but they just kind of aren't:

These types of reviews are probably due more to your particular style or editorial decisions not being to the liking of the reader. They seem to say something solid, but they never quite pull it off. Almost as if they know the books wasn't for them, but can't really put their finger on why.

And the truth of the matter is the book probably isn't their cup of tea, and they don't know why, and that is perfectly okay.

Sometimes they know exactly why it's not their cup of tea:


Or these folks, who apparently take issue with the fact that the book is the first in a series:

Even, here though, the readers did not realize the whole purpose of the book is to set up a series. They clearly did not want to invest in a series, and that is perfectly fine.

There is nothing you can do as an author to improve your work with these types of reviews, so the best thing to do is to ignore them and keep writing.

These can be just be hurtful reviews whose main aim is to ridicule the author for not living up to the reviewers admittedly vague idea of what good writing is. They differ from the previous two reviews in that they often include hurtful language whose only goal is to make sure the offending party never dares to pick up a pen again:

These reviews have no real aim other than to shame the writer for deigning to enter a realm the reviewer still hasn't had the guts to enter themselves. They want to make the author feel as bad about about him/herself as the reviewer feels about his/her own life decisions.

The best thing to do with these reviews is to ignore them. Or remember that both The Adventures of Huckleberry Finn and The Great Gatsby have their fair share of crappy, hurtful reviews, too.

Others just make no sense at all. They are pure word salad, as if someone gave Sarah Palin speed, set her in front of a keyboard and said "Go to town!"

These, you savor. You print them up and take them out whenever you feel like you're a crap writer who will never accomplish a piece of golden language if you tried for an eternity. You read them, you smile, and you feel better, secure in the knowledge that at least you know how the "return" button works, the purpose of punctuation, and how to spell "a."

I hope this has been helpful because it has amused the Dickens out of me.

Loved this. It puts everything into perspective

My favourite negative review was from somebody who hated my novel, (can't remember which one now) but - when I looked her up - only had one other review, of a new iron, and she disliked that even more than she disliked my book. It can be very cheering to look up the one and two star reviews of your favourite novelists and realise that you're in good company. I'd agree though that some thoughtful reviews even if a bit negative, can be very helpful - I used to find that with plays, back when that was what I mostly wrote. The people who just wanted to slag you off for not writing the kind of play they might have written themselves, if they could do it, were distinctly unhelpful, but the genuinely thoughtful critique could be excellent.

I wanted to post one that gave me one star Because the reader "was looking for something like Mr. King and this was not it." Unfortunately, the review had been removed.

Brilliant stuff, Lev. I think you gave me a book once in return for a fair and honest review, and i never got it done. If that's the case, please tell me and I'll do it now. I don't feel ashamed (much) at my failing, it's just that I'm a prat. Sorry. (And if it wasn't you but someone else I'm also sorry. Let them get in touch on the same basis!)

Well done, Lev. I was fascinated by the results your new trad publisher got in winning more reviews, good and bad. And I do agree with you: the bad review won't tank you, as long as they're evened out by the good. I think I'm almost more predisposed to want to dislike a book or film that's had nothing but 5-star reviews.