Metafiction, the Metaverse, and Me - Umberto Tosi 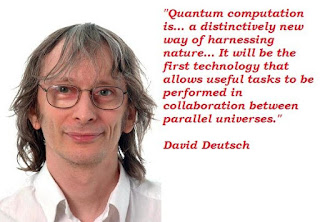 Lately, I've been reading – or I should say, tripping on – The Beginning of Infinity [New York, Penguin Group, 2011] by Oxford theoretical physicist David Deutsch, also best-selling author of The Fabric of Reality. Professor Deutsch speculates that much of what happens in fiction is close to a reality somewhere in the multiverse. As a writer, I find that comforting, especially when I postulate that Deutsch's projection could just as well apply to the abandoned narratives that litter my garden of forking drafts.
Maybe the happenings in my uncompleted drafts actually occurred in dimensions where momentary universes collapse due to off-kilter physical laws. Not being a mathematician, I can't work out the equations, but this projection might serve me well in offsetting blame for failed drafts. It wasn't me. It was those darn skewed dimensions. Indeed, a draft can seem copacetic one day, and melt off the page when I reopen it on screen the next morning.

"Whatever works in whatever universe you find yourself," I say! The question arises: How do you know whether you're in one universe or another. Is the universe you perceive at this moment populated by somebody's fictional characters, or just "nonfiction" folks? I have a hunch that we shift universes all the time without realizing it. Common world-shift symptoms include deja vu or jamais vu or having trouble finding car keys, then discovering them in a most improbable place. The universe I'm experiencing right now, for example, is the one in which Bill Cosby turned out to be a creep, and another creepy sociopath, Donald Trump has become a major US party candidate for President.
These past weeks, I've steeled myself to turn off the TV and resist social media and take refuge in my fictional world. The current American election campaign has proven too strong a distraction for this writer. I'm doing my best to dispell a nightmarish feeling that I've been beamed either into Philip Roth's Plot Against America or Philip K. Dick's Man in the High Castle. In either case, the nemesis turns out to be a bloated bigot with orange hair.
I'm trying to write my way home, where my car keys are on the dresser where I always put them and America has at long last elected a woman president. I won't even ask that it also be a universe where the Chicago Cubs win their first World Series in since 1907, breaking the" Curse of the Billy Goat." That's another story, and it would be asking too much of the gods.


Umberto Tosi is author of Ophelia Rising, Milagro on 34th Street and Our Own Kind. His short stories have been published in Catamaran Literary Reader and Chicago Quarterly Review where he is a contributing editor. During the 1980s and 90s, he played with several improvisational theater groups in Northern California, while editor of San Francisco magazine. He has written extensively for newspapers and periodicals nationally.
Borges Buddhism Cervantes Chicago David Deutsch Fellini Hamlet Hawking Hindism metafiction metaverse Milagro on 34th Street Ophelia ophelia rising Our Own Kind Shakespeare umberto tosi Vonnegut

Marsha Coupé said…
Agree with you entirely, Umberto. All creatives appreciate that "reality" is entirely subjective. Fascinating essay whatever universe one is in.

Fran B said…
I have learned a new word: copacetic. I thought it would mean maybe something like a cross between ascetic and cognisant. Turns out it's American slang for 'cool, OK, as it should be.'
So tomorrow, I won't be saying my usual 'that's OK'; I'll be saying 'copacetic, man!' (can also be spelt copasetic and copasetic, apparently).
3 August 2016 at 21:58

Rosalie Warren said…
Thank you, Umberto, for a very thought-provoking post - and for bringing together two of my chief interests - the philosophy of science and the writing of fiction. I find David Deutsch's theory of the multiverse disquieting - it has so many consequences I would rather not think about. I can't help hoping it's not true. But I often, when writing, have a sense of uncovering a story that already exists somewhere, and it's fascinating to speculate that maybe my characters are not entirely of my own creation.
4 August 2016 at 13:31