But when it comes to male authored crime/thriller fiction, women protagonists are in more short supply. Of course, there are a great many very good and highly successful crime/thriller novels with female protagonists that are written by women (a list too long to mention). And there is a large number of male authored thrillers with strong female characters. A good example is Lisbeth Salander in Steig Larrson's Millennium series. But where are the male authors in this genre when it comes to internalising a view of the world from woman's point of view.

Time to mention two notable exceptions. In John Grisham's The Pelican Brief, Darby Shaw is a very believable and tenacious investigator. Christine Lucas in S. J. Watson's Before I Go to Sleep is a completely believable protagonist - so much so that as I read this, I was totally unaware that S.J. is a male author. Maybe that's something to do with the use of the author's initials only so as to not give away his gender - a neat reversal of the strategy used by George Eliot (aka Mary Ann Evans).

No doubt there are very many more male authored crime/thriller fiction first person heroines out there that I'm unaware of. It would be surprising if there weren't given the large number of published novels. So, if you know of those I have missed, please let me know in the replies.

With that disclaimer in place, why is the field so bare? It can't be that male authors are incapable of placing themselves convincingly in the shoes of a female protagonist - the great fiction by Defoe, Flaubert, Ishiguro, McEwan et al proves otherwise. Is it a case that such empathy is rare amongst male authors, or is there another, more complex reason?

Literary critic Sarah Seltzer says, "Writing across gender may be harder, require more research and humility. We may fail or get 'called out' for letting our biases show, or being ignorant. But the attempt at understanding, empathy, and inhabiting the soul of someone whose life experience is not ours, helps us grow as writers, and people too." 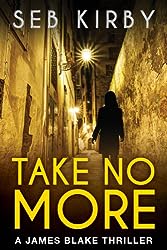 What's my interest in all of this? Well, in my first novel Take No More, I place myself in the shoes of conservator Julia Blake, albeit in third person, for about one third of the story. The remaining two-thirds is told in first person from the point of view of her husband, James. I continue this approach in the next two books in the series, Regret No More and Forgive No More. So I have a track record of a kind.

However in my new upcoming novel, the psychological thriller Sugar For Sugar (available in September), I've taken on the challenge of telling much of the story, in first person, from the point of view of lead character Issy Cunningham. Here's hoping I can come somewhere close to the achievements of some of the excellent authors mentioned here.

More details on Seb Kirby's books can be found here:

AliB said…
Interesting post, Seb.
there are of course female writers with male crime protagonists from D. L. Sayers to Ruth Rendell not to mention some AE authors too!
The whole gender thing is interesting, I think, in any genre and although I've always enjoyed writing from a male pov I'm still hugely impressed when I see a male writer who really gets under the female skin. For me the best example is The ginger Tree, a historical novel which is so compelling on the mother-son bond I couldn't believe a man had written it.
30 August 2016 at 11:37

Susan Price said…
I don't think it's a straight question of whether male authors can create female characters or vice versa. It's obvious that some very definately can while others either can't or aren't interested.

Does the genre have an influence? Some kinds of writing are more interested in a character's inner life and motivations than others. Much of the old SF I read as a teenager was built around ideas rather than character. Writing convincing characters of the sex opposite to their own wasn't something the authors were trying to do.

Then you get a writer like Terry Pratchett, whose female characters are, arguably, even more lively and convincing than his male ones. (Or, at least, as lively.) Pratchett, writing 'humorous fantasy' could probably have got away with cardboard cut-out characters so long as he kept the jokes coming - but his sympathies and interests went beyond that.

So, I put it to you, that a writer creates convincing characters of the opposite sex when: The genre they write for requires it: Their own interests and sympathies lead them to it.

Ali - the writer of The Ginger Tree (which I must look up) must have been one half of a mother-son bond, which would have given him clues to build on.
30 August 2016 at 11:54

Catherine Czerkawska said…
Interesting post. I think it's that some writers can do it and some can't or don't even want to, but mostly, I suspect, it just happens. I've written one novel wholly from a male POV (the Physic Garden) although it's still marketed as largely a 'women's book'. I'm not sure that it is, and the men I know who have read it seem to have enjoyed it and thought that my male narrator was believable and convincing. One female book group member, however, asked me how I could possibly have written a whole novel in the persona of such an unlikable character! Fortunately, everyone else disagreed with her, and I was genuinely hugely fond of my protagonist, but people bring themselves to their reading as much as any other activity! One thing I constantly find myself resenting is the victimisation of even convincing female characters. They have to die, tragically - Tess, Anna Karenina, Madame Bovary. It as though the male author can't possibly envisage a heroine surviving and living contentedly ever after. It's this aspect above all others that makes me love Cold Comfort Farm (although there's so much else to love about that novel) - the brisk and cheerful survival of the heroines.
30 August 2016 at 12:05