In memoriam and in gratitude by Sandra Horn

The announcement of the death of poet Derek Walcott reminded me how much I love and have been influenced by his amazing epic poem Omeros.  The influence is of a particular kind; when I was writing picture book texts my brain would get scrambled if I was reading certain texts at the same time, and I couldn’t then get the rhythms right. I had a day job then, which involved reading a lot of academic stuff. Fine for its purpose, but too lumpy and unrhythmic (I hope that’s a word) for me with my other hat on. After a day of scientific papers I couldn’t free my head up from the downbeat factual style and write poetically. It was like having an earworm. I needed to read something else to re-set my brain and fire my imagination again, and Omeros did that to perfection. 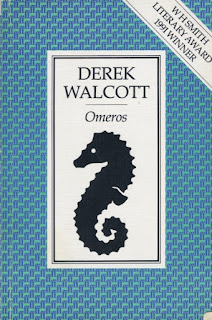 Omeros is set on Walcott’s home island of St Lucia. In its seven books, Walcott interweaves modern St Lucian versions of characters from Homer’s Iliad with autobiographical material and the history of the island, its long African-rooted past and more recent colonial epoch. It is rich in metaphor.  Some of the stories have a dream-like quality. The pain of exile runs through it. Perhaps above all it is a love-song to St Lucia and its people.
It isn’t the content, the words, so much as the music they make that settled my head back into its right mode for writing. There are twelve syllables to a line, but they don’t follow a metrical construction, and the rhyming scheme in the three-line stanzas is irregular. These traits give the writing a great sense of freedom; it is like speech and almost like singing.

‘Life is so fragile. It trembles like the aspens.
All its shadows are seasonal, including pain.’
and:
‘It was a cape that I knew, tree-bent and breezy,
no wanderer could have chosen a better grave.

If this was where it ended, the end was easy –
to give back the borrowed breath the joy that it gave,
with the sea exulting, the wind so wild with love.’

I marked them, and several other favourite lines, with torn-up scraps of paper twenty years or so ago. They still move and delight me. I realised when I heard the news of Walcott’s death that I hadn’t looked at the book for a long while, so this morning I have treated myself to dipping through the pages (over 300 in my edition) and reliving the joy I have always found in them. I hope he rests in peace, knowing that his life’s work was most brilliantly well done.

Ann Turnbull said…
Thank you for this, Sandra. I have a book of Derek Walcott's poetry, but it doesn't include Omeros, which I must get hold of. I love the lines you quoted.
20 March 2017 at 10:54

Umberto Tosi said…
What a lovely homage. Thank you, Sandra, for pointing me so eloquently to Omeros, something I may have continued to overlook to my loss. I'm off the the library now to check Derek Walcott's opus out.
20 March 2017 at 21:59