By Bill Kirton - March 05, 2017
In case you haven’t noticed, the publishing world has been undergoing a massive change over the last few years.

In the beginning, there were the traditional publishers! Well, not really. In the beginning, there were the professional copyists who prepared books on vellum or parchment. Moving swiftly on to the advent of the printing press, the guilds that handled the sale of most objects became involved in the production and sale of books. However, we mustn’t forget the printers, the people who produced books and performed the roles of editor, publisher and bookseller. Did you know that the first printer-publisher in Britain, William Caxton, printed more than ninety books in his lifetime?

The publication business which developed through the seventeenth to nineteenth centuries was still a mixture of producers and suppliers. But from the nineteenth century onwards the business of producing books became associated with publishers, although it was the twentieth century before it developed into a mammoth book industry which came to dominate publishing.

But self-publishing is not a new thing, nor has it always been associated with vanity. You only have to look at previous self-publishing authors to scotch that myth. So, let’s do a bit of name-dropping and have a look at who, in the past, has self-published. 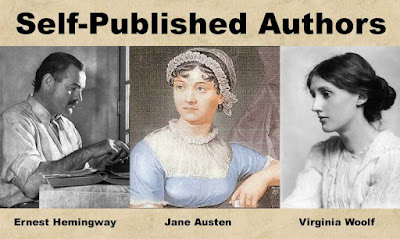 William Blake, the famed English poet and painter self-published some of his best-known works. Charles Dickens self-published A Christmas Carol. Jane Austen paid Thomas Egerton to publish Sense and Sensibility. Hogarth Press was established by Virginia Woolf and her husband for the purpose of publishing her books. Many other authors, whose names are easily recognized, include; Margaret Atwood, Elizabeth Barrett Browning, Lord Byron, Alexander Dumas, Thomas Hardy, Ernest Hemingway, Rudyard Kipling, Edgar Allan Poe, Beatrix Potter, and George Bernard Shaw. And more recently, the popular authors, Stephen King, and John Grisham.
I find the term self-published can be a bit of a catch-all, meaning different things to different people. However, even though self-publishing was often the norm before the rise of modern publishers, during the last century the derogatory term of ‘vanity’ became attached to it. An author who aspired to publication but could not attract a publisher and resorted to publishing a book themselves was deemed to be ‘vain’. This was a misnomer because as soon as they attracted a publisher they were no longer ‘vain’. And who would dare suggest vanity in the same breath as some of the self-publishers I have already mentioned. I could mention a lot more but in the interests of getting down to the nuts and bolts of self-publishing, I won’t.
The massive changes in the publishing world includes self-publishing which is currently evolving, and although there are still some who subscribe to the myths, these are gradually being exposed. After all, publishing only became a business following the rise of companies prepared to invest in authors in order to profit from their work. When an author decides to self-publish it changes that dynamic. 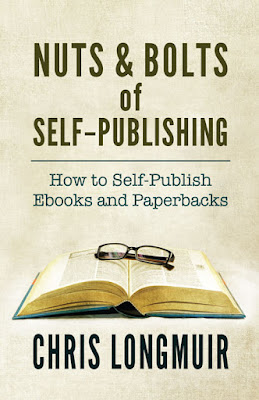 Self-publishing is not difficult once you have the roadmap and know what is expected and what you have to do to produce a professionally designed book. The Nuts & Bolts of Self-Publishing is a comprehensive guide to self-publishing which will provide you with that roadmap. It covers all aspects of self-publishing and will help you avoid some of the pitfalls you might encounter.

Alongside the step-by-step instructions you will find information about costing and pricing your book, author services and outsourcing, as well a lot more.

If you only buy one book on self-publishing, this is the one for you.

Where to buy Nuts & Bolts of Self-Publishing:

Chris Longmuir said…
Thanks, Wendy, I'm really pleased by your comment. I'm hoping a lot of writers will find it a useful adjunct to their libraries.
5 March 2017 at 08:43

Ann Turnbull said…
Chris, I'm off to look for your book right now. But before I go, can I just say what an interesting post this is. It's so clear, and sets the rise of the publishing industry in context as a relatively modern phenomenon.
5 March 2017 at 09:50

Bill Kirton said…
Fascinating post, Chris, and a book that deserves to succeed. You've been so generous with help and advice in the past, and I hope lots more readers benefit from it the way we have.
5 March 2017 at 11:30

glitter noir said…
Looks good, Chris, very good. But am I missing something? Or maybe you're a planning a sequel? Judging from the table of contents, it doesn't look as you've give more than a page or 2 to two subjects closest to most of our hearts: promotion and obtaining reviews. I know these are things most writers never disclose, but you're so candid and forthcoming...I'm stumped.
5 March 2017 at 14:48

Chris Longmuir said…
Thank you, everyone for your comments, and a special thanks to those of you who bought the book. I do hope you find it useful.

Reb, your comment about promotion and reviews was something I felt was outside the scope of this book which is mainly about self-publishing and how to go about doing it. If you are looking for a book on promotion, Wendy H Jones, who is a member of this group has written a very good and easily read one - Power Packed Book Marketing. I've mentioned it in my book and included it in the references.

The other aspect of this is that although I am very experienced in self-publishing, my skills in respect of promotion are abysmal. I'd much rather get on and write than spend hours promoting.
5 March 2017 at 17:25

Umberto Tosi said…
Great! Getting Nuts & Bolts right now! It's a solid reference,instructive-in-depth, and full of things I can quote to the rear guardiartas who still sneer at indie self-publishing as not "real." Thank you!
6 March 2017 at 05:59