I’ve always loved working with small children. From nursery age up through early primary school years, when their world is expanding rapidly and they are working at making sense of it, talking with them is a delight. They vary so much in the conceptual  paths they take along the way. For every child who is sad when the autumn gales destroy Tattybogle, there are several more who ‘love the part where he gets blown all to pieces’! While most children accept that, in The Moon Thieves, the cat, the rat, the boy and his Gran don’t know what the moon is when they first see it, I remember one solemn little boy saying, rather anxiously, ‘But surely the Gran would know?’ We write the stories, the readers make of it what they will. Excellent. 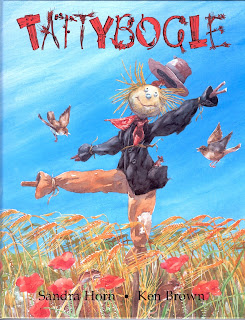 I have sometimes asked a class what they would think the moon was if they didn’t know it was the moon. It’s a question Jean Piaget would have said they couldn’t answer, but in any class of 5 and 6-year-olds, there will be one or two who ‘get it’ and when they do, the rest follow suit. JP neglected to look at the capacity of some members of a group to share ideas and thus expand the knowledge of all. 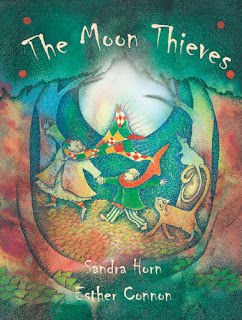 A colleague was once conducting a classic Piaget experiment with blue and brown, round and square beads. The idea Piaget had was that at a certain developmental age, children can only use one concept at a time.  That’s exactly what they did when he was in the room, sorting the beads either by colour or by shape, but when he left them alone with the video recorder still running, one child said to the other ‘There are other ways of doing this too, shall I show you?’ and proceeded to demonstrate all the combinations of shape and colour.  It’s interesting that the child waited until the Psychologist left before disclosing what s/he could do! It’s as if they were playing a game with him with a certain set of rules they had intuited. When he left, they reverted to their own ideas.

It’s a complex and expanding world when you are young. My oldest son, aged about three, I think, had a nosebleed. ‘What’s this?’ he asked – quite calmly. When we said it was blood, he was captivated. ‘Oh, really? I had no idea it was this colour!’

It reminded me of Ogden Nash’s poem ‘Don’t cry, darling, it’s blood all right’ in which he wrote about how children may consider gore quite nonchalantly, or even with glee, while being freaked out by a crumpled brown paper bag. We have to learn what to fear (possibly except being dropped and snakes, which may be innate).

Sometimes that learning results in strange ideas. I once invited James, my Nigerian post-graduate student and his wife and son to spend the day with us. James was a very strikingly handsome man, with skin so dark it was almost blue-black.

My youngest son Robert, at that time about the same age as his brother had been when he discovered that blood was red, was ginger-haired, with very white skin and freckles.

Some months later, Robert and I were in the car waiting to pick up another child. Robert was in the back strapped into his car seat. Suddenly, he gasped, undid the straps and hurled himself down into the footwell. ‘Quick! Get down! Get down! It’s an ugly!’ he yelled. He was obviously very frightened. The only person in sight was an African-Caribbean schoolgirl walking towards us. How he had gone from adoration of someone who could not have looked more different, to panic at the sight of brown skin, I have no idea. He was incoherent at the time, and I’m not sure he took it in when I mentioned James, but his new fear seemed to pass quite quickly. We live in a multi-cultural city and all kinds of people are everywhere; seventeen nationalities at his primary school, for example, and all manner of students coming and going to the house. The point is, it was an odd and unhappy and puzzling incident, but it was transient, as so many such reactions are.

Here’s a thing: we are in the middle of a nasty episode locally– well, on the Isle of Wight, in fact, just over the water from here. A couple have removed their sons from a C of E primary school because another boy at the school has taken to wearing a dress, sometimes.  They say it’s against their ‘Christian’ principles and their children are too young to face such issues as transgender people.  An LGBT  spokesperson has waded in on the other side. The couple are also suing the school, although I’m not clear what the grounds for that are.  It makes me want to shout ‘Stop!’ You don’t even know, any of you, that this is a transgender issue! Let him be, both lots of you! Turn the spotlight OFF children as they explore who they are and what that means!’ The boy in question is six years old, for crying out loud!

At that age or a little older, two girls we knew, both daughters of friends from different parts of the country and not known to each other, decided they were boys. This was announced calmly by both mothers: ‘By the way, J is a boy now.’ ‘Just so you know, H is a boy now– and not just any boy; a pirate boy.’

J and H wore trousers (and a pirate scarf on her head in H’s case), insisted on being called boys’ names, behaved as they decided a boy would. No fuss, no sweat at home or at school. It passed. At some point, they both reverted to girlhood. All part of the process of discovering who they might be, trying out different personae. I accept that a boy in a dress is more conspicuous than a girl in trousers, but even so, it’s the same kind of thing. A developmental phase requiring non-judgemental support from relevant adults while they keep the emotional tone low and even. That way, whether or not children are transgender will become apparent later and no traumas will have attended the issue.

‘They’re all queer but thee and me, and even thee’s a little odd’.  Include me, though. Something for writers to celebrate. After all, we know all about taking on a new persona, and adopting new and peculiar perspectives on the world  and its people and shedding them when they no longer serve.
Just like children.
Posted by Sandra Horn at 00:00

Splendid post. Thanks Sandra. PS - why did my mum decide to call me Jan, I wonder...

Good common sense in your post, Sandra. Adults so often project their own ideas, fears and prejudices on to children and assume the children are having the same ideas, etc. It's always good to count to ten - or even a hundred - and wait and see what happens next. And the phases thing: oh, yes! I spent most of my under-10 years wishing I was a boy and trying to dress as boyishly as was possible in the 50s (not so easy then as the whole unisex look was decades away). Behold, I grew up to be a heterosexual mother of three! I still quite like the Unisex look, though).

Absolutely agree with Sandra. My son spent several years as Buzz Lightyear. He insisted that various teachers called him Buzz and told people he had changed his name. I went with it and remember it as an amusing time in his then very young life. My daughter is one of the only girls in her 1500 strong senior school to wear trousers. She has had flack for it, which I told her she would. I also told her to be true to herself, which she is and I back her totally in her choice of dress. Boys should be allowed a skirt (which might be classed as a kilt of course) if they wish. Children should be encouraged to be themselves and not be crammed in to boxes they don't fit.