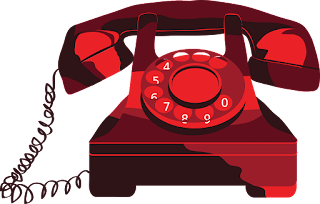 Since the beginning of August, I have been without incoming calls on my landline. I can call out with no problem, and the broadband is (mostly) there when I want it, but hardly anyone can actually call me. Ringing my number results in a message saying "you have dialled an incorrect number" or "invalid number" or  - rather more cryptically - three electronic beeps. The only exception to this rule seems to be when my phone provider rings to test the line or to apologize - they can get through just fine. Rather annoyingly, as it turns out, so can other call centres (so far a couple of random telemarketers and a robot survey) - although I have to admit things have been rather peaceful on the unsolicited calls front lately, so I assume most of them are getting blocked, just like my friends and family. The saga of investigations into this mysterious phenomenon could fill a whole book. Suffice to say that I have almost forgotten what my landline phone sounds like, to such an extent that when it does ring it takes me several seconds to identify the annoying noise, and then I think "YES! IT'S WORKING AGAIN!" - only to be disappointed when it turns out to be yet another automated test by my telecoms provider.

This experience, while deeply frustrating, has actually been quite revealing.
I don't get bothered by that many calls at home, but usually at least one unsolicited marketing call manages to sneak past my anonymous caller reject and blocked numbers list during the course of a day. Mum has a strange habit of calling for a chat when I'm in the middle of cooking supper or am in the attic at the top of a ladder... and then, of course, there are the estate agents trying to sell me a house, or still trying to sell mine (see last month's post). I had no idea how intrusive such calls can be - until they stopped. Suddenly, I found I could sit down at my computer to write without the fear of being interrupted by a ringing phone. I could take a candlelit bath without wondering whose call was being picked up by the answerphone, and if it was urgent enough that I should cut short my soak to answer. I use caller display to screen calls at home, but that's not the point - the very fact the phone rings can be intrusion enough to disturb a creative thought and kill it stone dead.

I do have a mobile phone, but I'm one of those annoying people who keep it turned off most of the time. I turn on my mobile only if I need to make a call, or if am on my way to meet someone and they might want to call me. In other words, I keep it for emergencies and deal with calls in the same way I dealt with emails when I only had dial-up. With no landline, I was tempted to leave my mobile on all the time as a substitute (since, obviously, not having a working phone line is a MAJOR EMERGENCY), until I realized this would be the perfect opportunity to experiment. If I were a nurse on call, or a fireman on duty (i.e. people dealing with real emergencies) things would be different. But I am a fantasy author, and not a very well known one. The chances of Hollywood calling me, or my agent needing my answer on a multi-million-dollar foreign rights offer before the day is over, are - let's face it - pretty slim. And who else is likely to phone me? The scammer supposedly from Microsoft offering to sort out my 'windows computer' problems can wait. So can the nosy robot survey wanting to know if I am on benefits. Even my phone provider, calling to assure me they are looking into my issue, does not need an immediate answer, especially as it has already taken them nearly two months to identify the problem, and goodness knows how much longer it'll be before they actually fix it. Yes, I would be upset to miss a friend calling, but a true friend will call back - or leave a message for me to call them later.

Where did this requirement to be contactable 24 hours a day, seven days a week, come from? When I was growing up in the 1970s, we did not even have a landline at home. Granted, we were a little behind the times, but I think my dad had nightmares of his teenage daughter on the phone all evening running up his phone bill. So I had to go to the call box on the corner and feed the public phone box with coins if I wanted to phone my friends. Naturally, we had no email - and the internet had not been invented. If we lived too far away to meet easily, we wrote letters (by hand) and posted them to each other and thought nothing of waiting a couple of days for a reply. When I wrote my first novel, I sent the manuscript to my publisher by post, printed out on half a ream of paper, and my editor worked through the marked-up text with me in a face-to-face meeting (since tracked changes had not been invented, either... bliss!). And did these methods take any longer? No, not at all. In fact - weirdly - now that we have 'instant' emails and mobile phones and are contactable 24 hours a day seven days a week, often a letter will invoke a much faster response. Perhaps it's the novelty value? But I suspect that, in reality, humans can only do so much at once, and expecting an instant response to an email, or even a phone call, is unrealistic. Most things just are not that urgent.

I have survived the past two months. Despite giving the poor, hard-working staff at my telecom provider's call centre a piece of my mind whenever I feel an urge to listen to half an hour or so of recorded music, I am secretly quite enjoying the unaccustomed peace and ability to control interruptions to my writing and my life. It is rather like going on holiday some place remote, where you get limited or zero mobile coverage and no wi-fi signal. Possibly not practical in the long term, at least not until I'm old enough to disappear off-grid completely, but it has certainly made me think about how even fairly limited interruptions, that come at unscheduled and unexpected times, can affect creative work and well-being.

Truth is, the fear of being interrupted is just as bad as the interruption itself. For example, it's extremely unlikely my mum will fall down the stairs (particularly as she lives in a bungalow), but I can quite happily spend all day worrying that she will, and that the next time my phone rings it will be someone telling me she's been rushed into hospital. I imagine it is a similar thing, only the other way around, for mothers when their children are away from home for the first time. It is even more unlikely that someone will call to tell me I have won the lottery, but the worry of missing such a call might well keep me connected 24 hours a day, seven days a week. On a lower level, the fear of missing my friend's good news will keep me religiously checking Facebook every morning... okay, every hour... and meanwhile, those pesky robots and scammers and telemarketers will take advantage of all this contact-anxiety to worm their way into my life.

Perhaps, instead of demanding compensation for not having incoming calls for nearly two months, I should be thanking my telephone provider for reminding me how much more relaxed we all were in the days when we didn't know (or, as a result, really care) what everyone else was doing, and could just get on with life, uninterrupted.

*
Katherine Roberts writes fantasy and historical fiction with a focus on legend and myth for young readers. Her backlist titles, originally published by Harper Collins and Chicken House, are now available as print on demand paperbacks. Find all the links at www.katherineroberts.co.uk
Posted by Katherine Roberts at 00:00

I'm not really a phone person and I can be really rude to telemarketers. I'm more inclined to text or email if I want to contact someone and only a few really close relatives and friends phone me. But I do resent the telemarketers and I can imagine phone silence is bliss. I can relate to the no phone situation as well. There were no phones during my childhood but we did install one when we were in business (small craft shop and tailoring) because it was a necessity. However, my two aunts who brought me up swore blind they would never get a phone because that would mean all the neighbours would want to use it! So, what did they do? Every time they need to use a phone they came and used mine!

That made me smile, Chris - rather like my parents. They don't have (or want) broadband, but every time they need it to book a flight or something like that, they come and use mine...

Yes! I hate the phone and have often wondered whether I could get the landline taken away and just have the internet and tv that are the other things in the package I have. (But I think it might turn out to cost just the same) I just don't usually answer it unless I'm actually standing right by it when it rings, or if I know someone whose call I would actually welcome is about to call me!
Unfortunately I am on a local committee of which the chairman prefers to talk on the phone (often at length) rather than send a quick email, whereas I find email a lot less intrusive and usually a good bit quicker in most cases. My sons and my close friends seem happy enough to communicate by Facebook message, or Twitter or text, which is fine, although I do sometimes get complaints about my mobile being switched off, or left at home, or not charged up!