I just wrote a book in a week... by Rosalie Warren

Sorry, but I’m going to have a little boast here. I just wrote a book in a week. 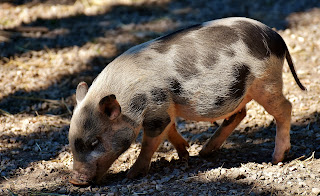 (You’ll see the relevance of the delightful piglet if you read the book I talk about below. Pictures of pigs are much better than pictures of copy editors – I hope you agree.)

I don’t know about you but I’ve never read one of those books that tell you how to write a book in a week, or in a day, or in five minutes or whatever ridiculously tiny amount of time the authors claim it can be done. Since I haven’t actually read one of these books, let’s just say that I remain to be convinced.

My last few attempts at novels remain unfinished, despite my having put hundreds and probably thousands of hours already into both, with drafts and redrafts by the dozen, or so it feels. Both are still ‘alive’, I’m glad to say, and I return to them from time to time, but it does seem a long while since I had the pleasure of writing The End under a final draft.

Except that I’ve now done it – and after only a week’s travail, and not even a full-time week as I’ve also been catching up on things around the house and garden. But don’t worry, I haven’t fallen into the fallacy of thinking that words can be churned out to order and that all it takes is a bit of discipline to come up with a masterpiece, or a bestseller at least, within a week. Let me reassure you that the book in question is very short. It’s not even written by me as Rosalie – it’s the work of my alter ego Sheila Glasbey, who used to lecture in cognitive science, linguistics and computer science and who now works as an editor and proofreader. She’s a lot more organised than Rosalie, I’ll say that for her.

So what is this little book? The thing is, most of my clients make the same mistakes and they make them over and over again (I’m talking of copy editing here – grammar, spelling, minor stylistic errors, that sort of thing). I work through their manuscripts, suggest my changes, and then write them each a little summary at the end, reviewing their errors and advising them on how to avoid them in future. Over time, I have produced a rather unwieldy document for my own benefit, out of which I sometimes cut sections and paste them into the crib sheets I prepare for my clients.

Given that the same mistakes (mainly involving dialogue and punctuation, at least where novels are concerned) occur over and over among my clients, it struck me that a concise book on the subject might be helpful. The tone would be light and friendly, while the advice would be succinct and sound. It would contain a pig, a Spanish villa and a couple with a difficult relationship, not helped by the aforementioned pig. The idea would not be to make myself or any other editor redundant, but to ensure that the writer had done the best editing job they possibly could before submitting it to someone like me for a professional copy edit and proofread. This way, they would save themselves money, while saving me a lot of tedious correcting. When people ask me for a quote for copy editing, I always ask to see a sample first and quote according to how much work there is to do, so a comparatively error-free manuscript will invariably cost less.

Anyway, the book is now complete and I thoroughly enjoyed writing it. All that’s needed is someone (not me) to proofread it, plus a cover and some illustrations. Given the light and (I hope) vaguely humorous tone, a few cartoon-type drawings would improve it no end. Pig drawings would be good. I have one or two possible artists in mind but haven’t asked them yet. If you think you could do this, or can recommend anyone else, I’d love to hear from you. You’d be paid, of course.

I’ll let you know, anyway, when the book comes out. It will be an e-book at first and we’ll see how that goes before considering a paperback.

Meanwhile it’s back to the novels – the two that are still awaiting completion. But at least I know I can finish something now. It’s done my writer’s morale a world of good, or it will have, if Sheila can get the message through to Rosalie.

Jan Needle said…
Please can I copy edit it (for free)? It sounds fascinating. And my daughter keeps pigs!
4 September 2017 at 08:59

Rosalie Warren said…
Thank you, Jan, for that very kind offer. I would be delighted if you would copy edit this book for me. It's just under 10,000 words. Please email me at roscov100 @ yahoo. co. uk (close the spaces) and send me your email address. Many thanks again - and hope you enjoy the piggy bits! :-)
4 September 2017 at 11:18

Sue Imgrund said…
That's excellent! Well done, and I look forward to reading it when it comes out. Will also scratch my head re. illustrators and will come back to you if I have any bright ideas.
4 September 2017 at 11:58

Katherine Roberts said…
That sounds really useful - please put the link up when it comes out!

I think it's true that novels can take years, but non-fiction (provided you know what you are going to write about) can be written in a shorter time if you put your mind to it.
4 September 2017 at 15:21

Rosalie Warren said…
Thanks, Katherine - yes, I'm sure you're right about non-fiction. I'll certainly post the link when it's published.
4 September 2017 at 17:37

Melissa Lawrence said…
I can't wait to read it and hopefully do the publicity for it as well! Well done on getting it to this stage so quickly and I think it's a really good idea that a lot of writers, both beginners and more experienced ones, will benefit from.
5 September 2017 at 23:20