I never really wanted to leave once I got there, but I guess everyone has to grow up and buy a house and a washing machine some time. I’d been living in the city for more than a dozen years and had ended up renting a flat beside the river in Chiswick, the waters at high tide lapping just metres from the window where I stationed myself and my typewriter every day.

The flat was in the home of an elderly widow whose husband had been curator of antiques at the and and one of whose sons was a Cabinet Minister in Margaret Thatcher’s government. Our flat had once been the family’s “nursery wing” and the surrounding house was a wonderland of cobwebs and curiosities. I would quite happily have sat there, watching the waters flow by, for the rest of my life.

Our landlady, however, turned out to be mortal and passed away after we had been there five years. The family needed to sell the elegant old house to someone who would then brush away the cobwebs and make it worth millions, 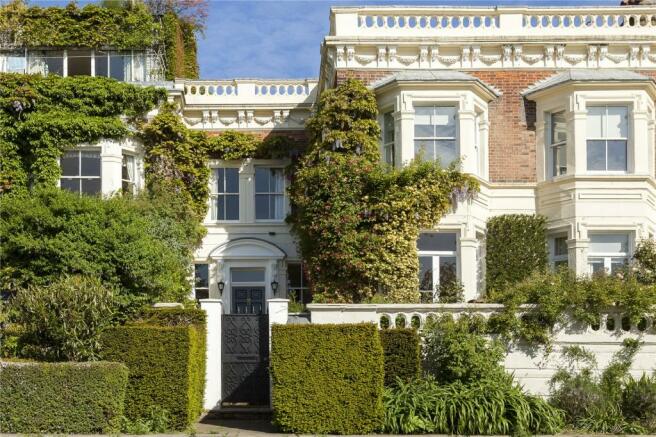 (I saw it on Rightmove recently for £5.5-million), and there was little chance that we would ever find somewhere comparable in London for the money we had been paying. (I suspect the family had deliberately and discreetly allowed our rent to remain low in exchange for the peace of mind of knowing that there were sympathetic young people around the house as their mother grew increasingly frail).  The thought of moving back into the world of damp basements in run-down areas was now less appealing than it had been during the earlier stages of my adult adventure.

It was time to get serious, move to the country, become a property owner, start a family and worry about things like the roof blowing off on windy nights or passing herds of deer stripping the shrubberies.

There are huge compensations to bringing up a family in the country but I have to admit I still feel a sort of peace descending on me when the train back to crosses over the waters that I used to watch flowing past my window, and releases me into the familiar streets of my youth. New York, Hong Kong, Paris, Sydney, St Petersburg, Venice; they all have their different charms and excitements but it is London, the city that I first read about and dreamed about and visited on steam trains with my mother, that eventually draws me back.

Despite all the developments to the East of the city, the and its surrounding areas stay remarkably unchanged. The influx of the global rich, initially from the oil rich states of the Middle East, followed by oligarchs from and the rest of the world, has cleaned up streets that were once mean, turned mews houses into property goldmines and breathed life into mansions that had become shabby office spaces. The great spending booms have revived some shops, while the internet has crushed others, and the growth of twenty four hour café culture has given many of the streets a continental feel, even on chilly English evenings.

My parents set up their first married home in the city at the end of the forties, in the aftermath of the Blitz. By the time I arrived there from school in 1970 there were still bombsites in evidence and was still the Dickensian fruit and veg market that George Bernard Shaw had depicted in Pygmalion, and which the film version, “My Fair Lady” had just started to glamorise and sanitize. The dark, abandoned warehouses that loomed over the river from its southern banks had become the haunt of squatting artists and would not start to be converted into multi-million pound apartments for at least another ten years.

As a freelance journalist I wrote a newspaper for St. Katherine’s Dock, the first of these docks to be gentrified by property speculators, and chronicled the changes as one of the greatest historical cities in the world adapted and regenerated from its sea-trading, bomb-battered past, moving towards its digital-trading future. From the squalor of Dickens’s East End to the grandeur of Byron’s Piccadilly, from Bertie Wooster’s Mayfair, Peter Pan’s Kensington and Paddington Bear’s Notting Hill to today’s city as depicted by authors as various as Jake Arnott, John Lanchester, Zadie Smith and Ian McEwan, London’s magic continues to haunt the pages of books and my children are now able live comfortably in areas of the city which were virtually derelict in the seventies, while the areas where I lived have become too expensive for most young people to even contemplate. I still love it.

Me too, Andrew, both to sexual harassment and London. Moved into Muswell Hill aeons ago, and swore we'd leave within two/three years, but like all the London 'villages', it's mutated and moved on. From here I can look down at the great city, and the Tube to Leicester Square takes half an hour (no there isn't a Tube station at MH, but an easy to get to one at East Finchley.) Trying, still, to persuade myself to leave, especially after the loss of my husband four years ago, but simply can't.

I lived in East Finchley for a while - got married and acquired our first cats there! - and we used to walk through Muswell Hill to Alexandra Park sometimes on Sundays.
When I first went to London to start work, it was because I had always been fascinated by the place where all the history seemed to have happened. But I think because of not being a native and having grown up in a small village in Scotland, I didn't acclimatise all that well, so after five years or so the noise and crowds were too much for me. (I live on the outskirts of Edinburgh now)