Movers and Shakers by Sandra Horn


‘We are the music-makers,
We are the dreamers of dreams,
...
Yet we are the movers and shakers
Of the world forever, it seems.’

O’Shaughnessy  didn’t explicitly mention writers, but they are here by implication in his Ode. Of course they are. I’m not sure how many of us forsake the world to go wandering under the pale moon and sit by desolate streams, but we do our share of moving and shaking, especially when we get together. There are many fine examples of books with the theme of wanting to make a difference; to change things for the better. Here are two I know well.

In 2003, as an angry and horrified response to the Iraq war, Mary Hoffman and Rhiannon Lassiter contacted every writer and illustrator of children’s books they could reach to invite them to contribute to a book of poems and stories. Contributions poured in from all over the world. The anthology is called Lines in the Sand. All profits and royalties were for UNICEF ‘s emergency appeal for the children of Iraq. The powerful introduction was addressed to the children and was about the realities of war. It ended: ‘The writers and artists who have contributed to this book want you to know what has been going on in the world for the last fifty years or so. But they don’t want to make you despair about the future of the human race. You, the children of today, are the ones with the power to make it stop. Tomorrow, when you are the grown-ups, you can make the world a more peaceful place.

Advances for the book and an American co-edition, together with sales from an auction of the artwork, raised a substantial sum of money for UNICEF, but perhaps the messages in it were equally if not more important. A review in The Sunday Times described it as ‘an uplifting and impassioned collection that goes beyond ephemeral politics to broaden children’s understanding ... to encourage them to aspire to a better world.’ 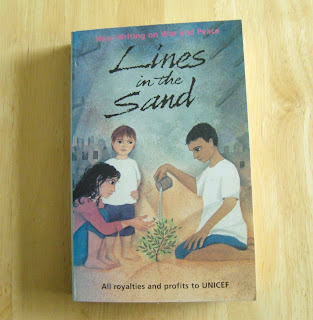 I was reminded of Lines in the Sand again recently, when the call went out from Jacci Bulman, Nicola Jackson and Kathleen Jones, for poems for an anthology to be called Write to Be Counted: an anthology of poetry to uphold human rights. All profits to go to PEN, the world’s oldest human rights organisation, which ‘aims to promote friendship and intellectual co-operation among writers everywhere to fight for freedom of expression; and to act as a powerful voice on behalf of writers harassed, imprisoned and sometimes killed for their views.’ The editors’ introductions speak of hope, light, love and fellowship and it is another terrific anthology. It was launched to a standing-room-only crowd on October 4th at the Poetry Cafe in Covent Garden and at the Old Fire Station in Penrith on October 14th. 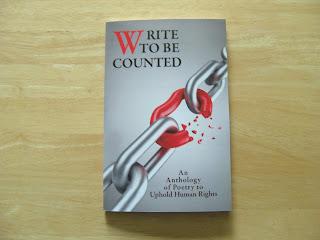 At this point, I should say that I have poems in both anthologies – that I am privileged and humbled and delighted (and amazed) to have poems in both – but this is not a puff for me, I just wanted to ‘declare my interest’ if that’s the term. Rather, it is about the power of words to transform, to uplift, to guide, and about the power of writers (dreamers of dreams, movers and shakers!) for good in the world, especially when they act together.

Katherine Roberts said…
I have 'Lines in the Sand' courtesy of one of the contributors Cindy Jefferies. I rediscovered it while packing books into boxes for a house move... it's a lovely collection of poems and stories.
20 October 2017 at 15:59

glitter noir said…
Glad to hear of your involvement, Sandra. Two achievements to be proud of.
22 October 2017 at 17:15