Where do they go? by Cecilia Peartree

By Cecilia Peartree - October 05, 2017
It's quite unusual for me to write anything by hand, not least because of the difficulties in deciphering it afterwards. But I do have a series of writing notebooks, which I tend to use for planning novels, although I'm doing well if a plan exceeds a page or so, for editing notes and for making monthly and annual plans, each more flexible than the preceding one. For instance, I see my plan for September had 6 items in it, of which I only managed to achieve one.

It was when I found my planning notebook and reached for a pen to start a new page for October, which I hope will be more organised than September, although I seriously doubt it, that I realised there were no pens on the table I use as my writing desk, in the corner of the conservatory.

I read once upon a time in a book about de-cluttering - despite my failure to de-clutter, I often try to come to terms with it in the only way I know how, which is to understand it in theory - that if you get hold of lovely containers for things, then you're more likely to put things away in them. With this in mind, earlier in the year I selected a particularly lovely container, which not only has a picture of an elephant, my favourite animal, on the front but is also in the shape of a heart, which I suppose should make me love it even more, and decided it would be my pen box. 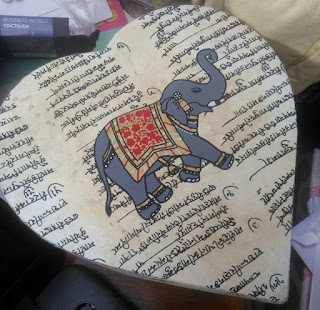 I bought a new packet of ten biros in Tesco's and opened it as soon as I got home, decanted the contents into the box.and sat back, feeling virtuous.

Needless to say, when I opened the lovely container this morning - I expect everyone can guess where this is going - I found it completely empty.

There were no pens on the table at all, not even underneath all the notebooks, my theatre season tickets, a couple of books that are meant to be for research so naturally I haven't yet got round to reading them, my little travelling bluetooth keyboard, and a bag containing a portable power supply as well as the Scottie dog from our family Monopoly set. The little (metal) dog happened, inexplicably, to find its way into my dressing-gown pocket and turned up while I was being X-rayed but fortunately didn't get into the picture.

On the other hand, when I extended my search only slightly further afield I found five pens at the bottom of the rucksack I usually take to work with me, and another three at the bottom of my current handbag, so I am ok for pens now. Until they go off somewhere again. I may even put them back in the box, if I think it's worthwhile. 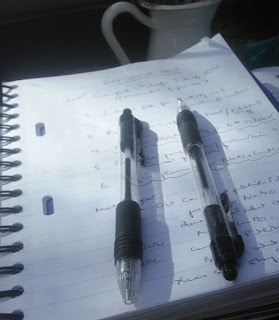 Chris Longmuir said…
I think pens develop legs and they go wandering while we're sleeping. Perhaps we should put electronic tags on them.
5 October 2017 at 08:45