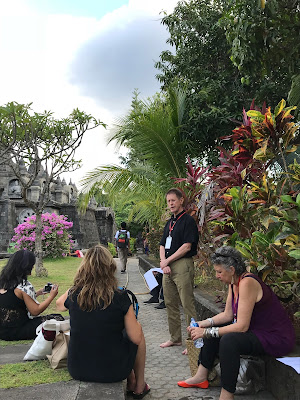 By the time I reached Bali on October 22nd, I was mentally and physically drained.

I had been travelling and been out of my home in Chicago for over two months, and although I was to deliver a keynote at the Asia Pacific Writers and Translators Annual Conference in two days, I hadn’t written anything at all in months. My keynote, titled Contests and Prizes: The Advantage of the (Global) Asian Writer, was becoming impossible to write.


I felt the imposter syndrome growing toxic in my brain.

Despite being surrounded by the beauty of Bali, I was unable to relax. There were a Ganesha at every turn – the APWT conference was hosted by the  Ganesha University of Education and there was a beautiful Ganesha right outside my hotel door – but it seemed clear that the God of Scribes and Beginnings was concerned with weightier matters than my silly writerly angst. 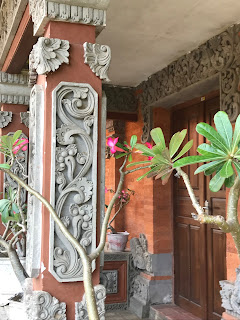 The Asia Pacific Writers and Translators community has been in existence for 10 years now, and this was my third APWT conference. What I especially love about APWT is that there is a genuine effort to be a Pan-AsiaPacific group that welcomes both writers and translators. The choice of conference venue is frequently dictated by how easy it would be for Asian writers, especially from under-represented countries, to travel to the venue keeping costs and visa requirements in mind.

A good number of APWT writers have become my good friends; this is a very collegial, cosy group, with none of the literary casteism that festivals with more star power inevitably attract. We hang out over meals and tea-breaks and dinner and the networking seems unforced with kind and kindred spirits.

So when I saw that that a writer I have known and admired for years -- Tim Tomlinson of the New York Writers Workshop -- was running a poetry workshop at the BrahmaVihara Arama Buddhist Monastery,  I had to sign up. The workshop was being held the day before my keynote (which I still hadn't written) but it seemed like a really good idea. 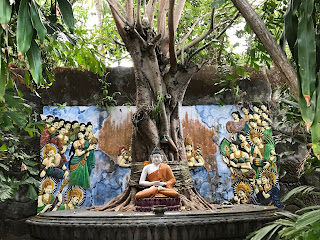 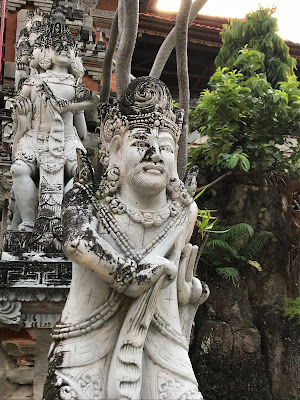 The Monastery turned out to be a wonderful meditative space, situated on a hilltop with gorgeous views. At every turn there seems to be a hidden wonder: a buddha deep in meditation, a detailed statue rising from the stairway, or just the glorious profusion of jacaranda, hibiscus and frangipani in bloom. 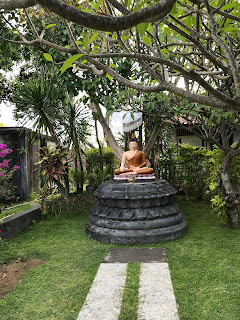 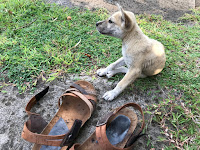 Storm clouds started to gather as Tim distributed the handouts on writing about place and family. We got to work, even as a stray puppy frolicked and tugged at someone's sarong and lines of ants marched resolutely on their paths despite our presence. The rain started to fall. We continued to write in the silence of that place, the years of meditative practice seemingly unleashing something in my lost creativity.

I wrote for pages, and when I stopped to edit, I wrote some more. The rain continued to fall like a benediction.

I continued to write after I came back to my hotel room. There is something about meditation and writing that is deeply powerful, which I need to harness more often. 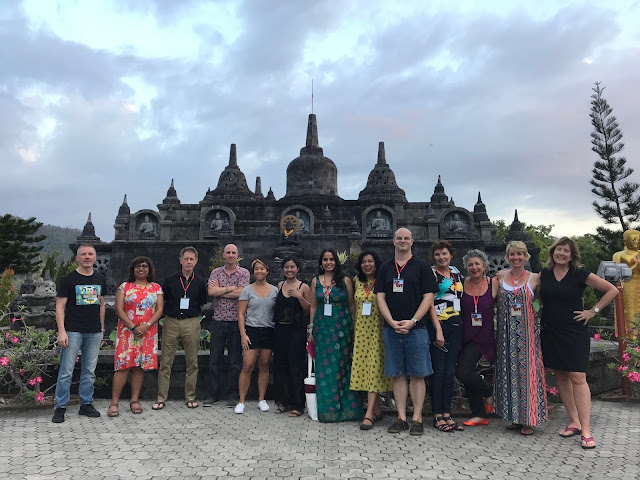 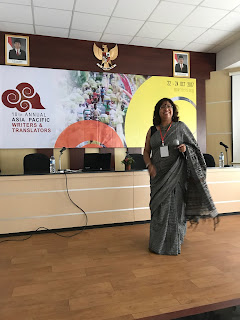 And my keynote, you ask? I not only finished it to my satisfaction, I had a great time delivering the talk!


Check out the Asia Pacific Writers and Translators here and the New York Writers Workshop here.

Elizabeth Kay said…
I visited Bali three years ago, and your post brought it all back. Beautiful place.
26 October 2017 at 08:15

Umberto Tosi said…
Thank you, Dipika, for taking us on your inward-outward journey and reminding us of the power of presence and meditation. Congratulations on a successful presentation.
26 October 2017 at 12:34

Enid Richemont said…
A fascinating post - loved it, and want to go there. What about that angry volcano, though?
27 October 2017 at 20:49

Dipika Mukherjee said…
Thanks Elizabeth and Umberto for your kind comments. Enid, the volcano seemed subdued by the collective of writerly voices and gave us no trouble at all :)
28 October 2017 at 04:24