A Murder of Crime Writers by Wendy H Jones 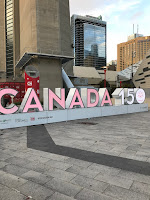 So what do Canada's 150th Birthday and a bunch of crime writers have in common? No it's not a joke. For their 150th Birthday the Canadians threw the crime party of the year, Bouchercon 2017. This conference hosts the glitterati of the crime writing world and it was an honour to be a part of it. The fact it was in Toronto was the icing on the cake. What an exciting city. The vibrancy and fun of Toronto is another blog post in itself.

So, why am I waxing lyrical about Bouchercon? The answer, it is a chance to hear the top names in the industry talk about their writing and publishing itself. Who can pass up the chance to hear from the likes of Sara Paretsky and Kathy Reich? Not only are they knowledgable, but also extremely funny. 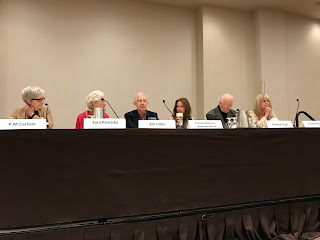 Of course, I had to have my photo taken with them.

The Scots were in town in force. Caro Ramsey moderated a panel with her usual flair and bucketloads of humour. Her panellists were equally funny leading to genuinely laugh out loud moments. 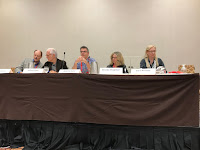 What with a dance, a quiz, networking, panels and making new friends it was a whirlwind of fun and learning about the industry. The Canadians put on a great event and made everyone feel welcome. I am already looking forward to the next Bouchercon. If you ever get a chance to go to one I can highly recommend it. It's not all dead bodies you know.

Wendy H. Jones is the author of the award winning DI Shona McKenzie Mystery series, and The Young Adult series, The Fergus and Flora Mysteries. She is also an international public speaker, the presenter of Wendy's Book Buzz radio show, and runs a Writers Consultancy and Training company, Equipped to Write.