TARGET PRACTICE: or Waiting to See the Whites of Their Eyes by Jane Thornley 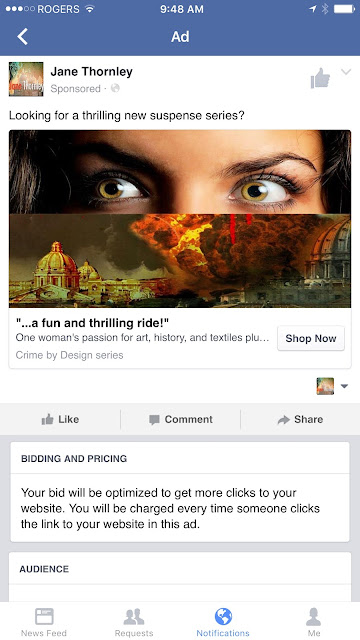 My early indie publishing career had me uploading my first book on Amazon and then sitting back to wait for the readers to flock in. I did have a newsletter list consisting of fans who had been following me from a prior life, and it was to them that I sent the initial BUY MY BOOK message. Actually, buy it they did. In fact, they bought enough books on that first day to jettison me up to within the top 10 of all books on Amazon. At the time (this was 2013), I was unimpressed. #1 would have been so much better.

But after that, I just waited. I thought for sure that after Frozen Angel's excellent maiden voyage, something magic would happen and my writing career would just take off on some fairy-dusted trajectory without my assistance. Huh. Still, I just kept writing rather than marketing because that's what I'd always done.

And then various self-published marketing courses began hitting the scene with stories of authors actually finding readers through social media. Inspiration fired my jets. The first course I took (and the only one I needed) focussed on marketing through Facebook. By then, I'd launched a series that was not only a thriller/mystery/caper hybrid, but featured a protagonist who knit. Knitting anything ends up wedged among the cosies on Amazon, but mine didn't fit. I had blood, guts, high-speed chases, oh, and sex. Besides, knitting was not even a plot factor, making my reviews often petulant and disappointed. No, I needed to go reader-hunting and target my readers right between the eyes. Distinguishing my series from the masses became my overwhelming impetus. Facebook offered just the tools needed.

By now thousands of market-savvy writers had begun proliferating the Facebook feeds with clever ads, most of them targeting broad categories like suspense, mystery, or 'readers who like author fill-in-the-blank'. But, thanks to Facebook's specific audience-targeting capabilities, I could zero in on readers who love thrillers/mysteries but who also knit, or readers who love thrillers but who are also interested in textiles and archaeology. By honing in on age groups, interests, and even gender, I could package eye-catching graphics with a catchy phrase and hit my potential readers right between the eyes.

Here's the short story: this huntress found her readers. Hoards of them. For the first few months of my Facebook career, I thought I'd be buying a second home in Italy. I was a best-selling author! I say this is past tense because then Facebook flipped the switch. They dialled down the number of ads sent to their subscribers; they offered their peeps the option to turn ads off all together and; they made the exercise of reader-hunting much more expensive. On top of that, world events began spewing vitriole and anguish into the online feeds, prompting many of my readers to simply switch off. My sales took a nose-dive, resulting in me dialling down my Facebook ads before I went broke.

But, hey, I'm back. Now I'm coming in with a new psychological suspense series which should appeal to a broader interest-base, just as the Facebookers slowly begin to reengage with social media. New ads are blooming in my head as I write, and my marketing plan is ready to roll with Facebook and my newsletter list being my prime campaign strategy.

I will go reader-hunting again, this time with a beady eye fixed on targeting new reader profiles. Beware, dear reader: this time I may be coming for you.

For more information on Facebook advertising, try this source: Resources for Author Marketing

Anonymous said…
This is all rather beyond me but I love the idea of the thriller protagonist who also knits woolly jumpers. Whatever your advertising method, it's clearly working brilliantly! Good luck with the new book.
15 October 2017 at 15:03