I've been trying to find a new cat ever since our very old cat died earlier this year. The younger one, Jacques, has been quite depressed to find himself the only feline left in the household. As he grew up with two other cats and a dog, I can see it must have been a shock to his system. He has demonstrated this state of mind by becoming unbelievably clingy. When I go out to work at my day job he is either peering round the banister with big sad eyes as I disappear through the front door, or sitting on my son's bedroom window-sill staring at me with big sad eyes as I get into the car. At night he likes to lie on top of me or alongside me, which is all very well in winter but now that the slightly less icy weather is here, is a bit annoying.  During the day he goes in and out quite a bit but keeps coming back to make sure we are still here, and if he's indoors he tends to follow me around in that cat way of walking just ahead of where he thinks I'm going. 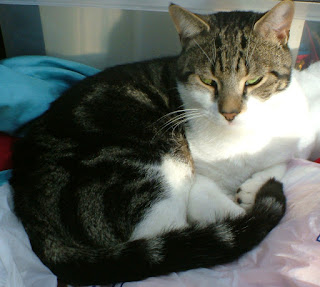 Unfortunately the cat re-homing organisations I've approached so far have been less than helpful, to the extent that I've now started to consider actually buying a cat. This is an unknown concept to us, as we have always just 'acquired' new cats when we've needed one - and quite often when we haven't.
I was amazed to find that when we approached one cat rescue organisation I was the victim of age discrimination ('if they scratch you it will take longer to heal') and in the other case my housekeeping didn't come up to their standards ('you seemed overwhelmed' which turned out to mean, in cat rescue psycho-babble, we've decided from looking at your house that you're unable to cope with everyday life).

Now, I am the first to admit that housework is not one of my priorities but I don't feel overwhelmed by it, precisely because of that. As long as we have clean clothes, don't die of bacteria on the worktops and can still find a path to the front and back doors in an emergency, then things can't be too desperate. We also aren't surrounded by teetering piles of old newspapers, by the way. Jacques has spent many happy hours sleeping on top of junk mail and crashing around in the night knocking books down from shelves, and we were looking forward to giving a new cat the benefit of this experience too.

Just when I was recovering from the shock of having my mental state diagnosed by volunteers from a cat rescue organisation, I happened to read somewhere online that some sort of anti-clutter project is due to take place in Edinburgh and that having too much clutter is about to be classified as a serious mental health condition. I have always considered myself to be the only sane one in the family so I feel personally affronted by this. Who decides how much clutter is too much? Is this another way of trying to get everyone to conform to certain unrealistic standards? Or, and this is more sinister, of forcing women back into housework?

My only positive take on this is that I will undoubtedly be able to incorporate some of it in a novel at some point. It would be too simple to have a volunteer from some charity or other smothered by piles of old newspapers, but I am sure my twisted mind will wrangle this material into shape sooner or later. The negative take, of course, is that the road to becoming a crazy old cat lady is much harder to negotiate than I had previously imagined.

I don't usually do this, but all the above rambling reminded me of a scene from the first in my mystery series.

'It's Mrs Wingford,' said a brisk voice. Surely it couldn't be another nursing supervisor. It did sound very much like one, though.
'Head teacher at Pitkirtly High School,' she added helpfully. 'Is that Mr Wilson?'
'Yes,' he said reluctantly. She would track him down eventually, even if he put her off now.
'I just wanted to alert you to the fact that Marina was seen talking to a very odd-looking man outside the school this morning, and we thought you should be aware - '
'What sort of man?' said Christopher, feeling somewhat at a loss. Again, what did they expect him to do about it? After all, it wasn't as if Marina had gone to school on her own; she had been escorted by Big Dave, who surely would have -
'Was he big and - well, big, with dark hair and a beard, and wearing a woolly hat?' he said, interrupting Mrs Wingford's ramblings.
'As I was saying,' said Mrs Wingford reprovingly, perhaps on the verge of telling him off for interrupting, 'I have a note here of what he looked like. Yes, big, dark hair, beard, woolly hat - seemed scruffy - shoes worn down at the heel slightly - possibly a rough sleeper - query alcohol problems...'
'With all due respect, Mrs Wingford,' said Christopher, offended on Big Dave's behalf by this woman who thought she could diagnose alcohol problems by looking at someone's shoes, 'I don't see how you can diagnose alcoholism by looking at someone's shoes. If you could, then maybe my sister would have got treatment years ago instead of having to wait until a crisis developed. The man you're describing is a close personal friend of mine and I don't think he would be very pleased if he could hear you describing him in this way.'
Christopher felt weak at the knees by the time he had finished this little speech.
'Sorry, Mr Wilson, I couldn't hear all of that,' said Mrs Wingford. 'We get a lot of static in school from the overhead pylons.'

Chris Longmuir said…
Sorry about the difficulty in acquiring a cat and have decided I will not bother to apply. Oh, and I'm with you all the way about housework. I have that noted down as a dirty word in my notebook of offensive words. As for clutter, well I reckon I must be well and truly mad. Don't let the men or women (have to be PC correct) in white coats anywhere near me. Good luck in the cat hunt.
5 May 2018 at 07:46

Bill Kirton said…
I think there must be several definitions of the word ‘clutter’, Cecilia, many of them extreme variants of the others despite apparently signifying the same condition. Please continue to resist the clutter police’s exhortations. I hope your Cat Lady aspirations bear fruit and thanks for a very entertaining post.
5 May 2018 at 10:43

We have both cats and clutter.