Some random musings about corvids by Sandra Horn


There’s an old saying that if you see a flock of crows, they’re rooks, and if you see a solitary rook, it’s a crow. It has been claimed by those who know these things that it isn’t true but it’s true-ish, as many of the old tales are.  Black birds congregating in large numbers in trees are mostly rooks, and crows are more likely to be alone or in pairs.

I remember being fascinated by a book about raven behaviour when a carcass is discovered by scouting birds. They report back to their clan by distinctive cries and then there’s a hierarchy of who feeds first, regulated by patterns of calls. I was enjoying the book very much but it descended into a miseryfest by the writer. He was cold, it was hard to find roadkill, the water ran out, etc. etc... It reminded me of my bête noir, him off the tele who goes off on ‘adventures’ all over the world and then moans into the camera because he’s all covered in boils or he’s left his horse in a field in Mongolia and they’ve all died of fly-strike. It makes me throw things at the screen and counsel him very loudly and in no uncertain terms to Stay At Home, You Inveterate Plonker! Rant over. Where was I? Oh yes.

One of the many delights of staying with our friend Di in Cumbria was the evening drink in the garden, watching the twilight deepen as bats flitted above our heads and the rooks came home to the trees nearby. I’d never appreciated how conversational they sounded until then. They don’t just caw and quark, they make soft gossipy noises and sometimes sound like questions-and-answers. I put some of the sounds into The Crows’ Nest, in which Mo and Jo Crow are looking for a home and constantly being thwarted until they find the perfect place in a city. Unaccountably, it won an award for a non-fiction picture book! Apart from the rook noises, there was one real event woven into it, when birds dropping a wet twig onto a nest on a pylon caused a short and plunged half Southampton into darkness, but they were pigeons, not crows. 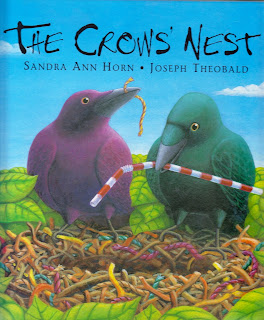 I’ve put other members of the family into books, too. A jay plants the acorn that will grow into the oak that will eventually become ship’s timbers and then the cottage in The Furzey Oak. 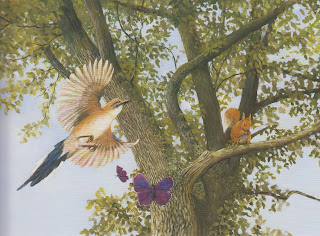 In The Stormteller, a jackdaw picks Marietta up from the beach, attracted by her sparkly costume, and is the unwitting cause of her reunion with Zeke. 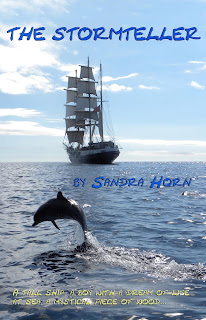 Jackdaws like nesting on chimneys and cause mess and sometimes fires when their casual attitude to nest building makes loose twigs fall down into the smokehole. I used that idea in The Hob and Miss Minkin stories.

My latest venture into the world of corvids is artist Bonnie Helen Hawkins’ 52crows project. She is creating an illustration of a crow every week for a year, and they are stunning. I sent her my poem ‘Crow’ which contrasts the ordinary black bird we see around with the powerful myths associated with them:

I see you, Crow,
side-stepping, neat along the fence,
head down, wings folded just so,
tentative, polite –
‘May I have just that little crumb?
May I? Really? How very, very kind.’

I know you, Crow,
I’ve seen the lightning flash behind your eyes,
Heard you call up thunderclouds,
Topple trees with one clap of your wings,
Open your beak and shatter the sky.

Humans seem to have a long love-hate relationship with corvids. In the countryside, rooks have often been killed – eaten in pies or hung up along fences as a warning to others to keep away from crops. There’s a plan in a part of Scotland to cull ravens to improve the survival of wading birds. Many other members of the family, such as magpies, are nest-robbers. Then there are songs like ‘The twa corbies’-  Eek! They do what they must to survive and it isn’t always pretty, but it is often impressive.

Many writers have woven  corvids into fiction and poetry. Edgar Allan Poe’s strange and melancholic poem The Raven, in which it croaks ‘Nevermore!’  - delightfully borrowed by Joan Aiken in Arabella and Mortimer, with all the darkness in Poe’s original taken out. Then there’s Ted Hughes’ fascination with crows, which he sees as mysterious, powerful, dangerous in a series of unsettling poems. In contrast, in the Norse myths, Odin is accompanied by two crows, Hugi  and Munnin (spirit and memory) who symbolise the creative spirit. In ancient Greek myths, a crow is a devotee of Apollo and was once Athena’s bird, but proved to gossipy for her liking and was replaced by an owl. Bad mistake! One of Athena’s attributes was wisdom. She’d have done much better to stick with the crow – infinitely smarter than any owl.  Crows are sometimes seen as agents of darkness and death in folklore, but also as symbolising divine providence, fighting evil spirits, bringing bread to a man alone in the desert. There’s a story of St Cuthbert reprimanding crows for stealing nest material from a newly-thatched roof, and they fly off but come back with bowed heads, wings trailing in the dust, repentant, bringing a gift of lard (also nicked presumably!)

We may dislike the corvids’ methods of feeding themselves and their chicks, but on the other hand, we admire their ingenuity. Scientists have often devised complex puzzles for them, involving several manoeuvres to get at food, and they are very quick to find solutions. They also play. There’s an amazing clip on YouTube of a crow using a flattened tin as a skateboard, with no other obvious purpose than fun.They delight, disgust, frighten and intrigue us in turn. They are awesome!

Bill Kirton said…
I had no idea this was such a rich subject with so many varied triggers for the imagination. Thanks, Sandra.
20 May 2018 at 12:38

Umberto Tosi said…
What's not to love about Corvidae, my favorite genus of bird and beast? Apparently a lot, among the crow-haters of the world. They have annoying cries and their share of mischievous, but that endears them to me all the more - crows, ravens, jackdaws and their cousin magpies, the lot. Kudos to you for championing our corbie friends and weaving compelling tales about them for us all to enjoy!
20 May 2018 at 13:02

Katherine Roberts said…
And, of course, in Game of Thrones, you can "send a raven" with a message... the ravens turn white when winter comes, apparently.
20 May 2018 at 17:54