A Basket of Bears -- Misha Herwin 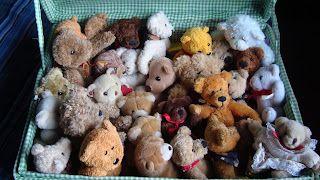 This summer my mum moved into sheltered accommodation. The family house where she had live for over fifty years was put on the market. It was a home full of memories−a place of births, weddings and deaths. My younger brother had been born, one May evening, in the back bedroom. His birth announced as my sister and I were watching the end of a favourite soap. It was where I had the reception for my first wedding. A small affair there were only fifteen people present. Mum did the catering and my cousin took the pictures. The house was also where my father died, peacefully after a long lingering decline and where Mum went on living until finally at the age of ninety-eight, she decided it was time to move out.
She is very happy in her lovely new flat. She is surrounded by people, which is what she wanted, there is twenty-four hour emergency care and the food is great. All in all it’s the right solution and we’re very glad we didn’t have to wait more than a few months for a flat to be available. When it did come up, there was no time to think. We had to move fast, or the next person on the list would take up the offer.
Having to pack up the family home was done in somewhat of a rush. Much of the furniture Mum could take with her. What was left some was passed on to members of the family, some things went to friends and some to charity shops. We were all asked what we would like to take. I have some pieces from Mum’s collection of blue and white china and a painting of my sister’s that used to hang in the living room and which has always been one of my favourites.
I also have a basket full of small bears. This was not my choice. In fact Mum gave it to my daughter for the great-grandchildren. Lucy decided that they already have enough cuddly toys and so the basket came to me.
Now I am very fond of bears. Our house has quite a number of them, including a basket of my own and there simply wasn’t room for more.
At this point I wanted to write about getting rid of them, but that was far too harsh a term for a collection of bears. Re-homing was more to my taste, but how and where. Charity shops are bursting with unwanted soft toys. They end up in bins to be rummaged through and discarded at will and those that don’t sell quickly go, I’m reliably informed by a friend who volunteers for Help the Aged, into landfill.
This was not going to be the fate of the bears who had been entrusted to my care. Once they came into my home, these creatures were no longer inanimate objects but were on the verge of being named and adopted into the larger community of bears. It’s one of the perils of being a writer that things quickly accrue names and personalities. They become individuals with histories of their own and to consign them to landfill would be unthinkable.
But where could they go?
Luckily a friend knows of a charity that makes up Christmas boxes for children who have very little and they are happy to take my basket full. So that is where they are going. All except for one. 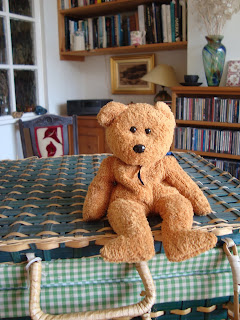 When Pudding looked at me with that quizzical expression on his face, I knew that he had to stay. After all this is a bear with a story to tell…

Lynne Garner said…
I love bears and have a few dotted around the house. My latest was purchased by my other half when he saw it being sold on a stall raising money for the air cadets. He said he knew I would love it and also it made him think of my late father (who was in the RAF) as it has a RAF logo on the front of its T-shirt.

Umberto Tosi said…
Thank you for sharing the memories and melancholy of this transition, which I know from experience, moves everyone in a family and beyond.
11 September 2019 at 16:26