A Craft of Love by Linda LaRoche 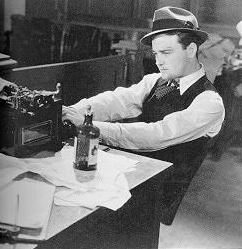 I recently met a group of neighbors.  I sat next to the city Mayor but it was the woman seated on the other side of me who teaches at Pasadena City College (PCC) that asked me about writing.  I described my writing background. It goes back to scribbling notes as a child for my mother, to writing for the middle school newspaper to writing in journalism classes.  Writers don’t need a degree to write, but I should add that had I majored in journalism I would have had the sheer discipline required to write sooner. The skill of turning out stories people would want to read, stories that were carefully structured, grammatically correct with no spelling mistakes, factually correct and reader-friendly.


I had a love hate relationship with writing until I found journalism, which was a perfect outlet because I then had a concrete goal, could be compensated and I pursued it with a passion.


I never turned a story in on time, they were always early but it required hard work which I eventually experienced after frustration, sweat and many hours of labor.


As a freelance journalist, I had great gigs, ranging from reporting on alternative health, the arts, classical music, culture, fashion, human interest stories, opera and philanthropy.  All subjects that I have a keen interest in.  My favorite were the opera reviews that I did for a westside magazine.  I calculated that I covered about 22 performances and in doing so learned more about the composers, artists, history and scenery of operas than I ever would have from a book.


I loved journalism and the opportunity it gave to get into people’s lives, have different experiences, to go to new places and learn new things. But after freelancing for six years, I decided it was time to turn the page (pardon the pun).


I had often heard that writers write because they have to. They have something that they need to say. That was my case, with my first book, How to Write Short Stories to be Proud Of.  Ironically, no one has ever caught on that sentence is grammatically incorrect because it ends with Of, which is a preposition. It should have been, How to Write Short Stories of Which to be Proud.  But I didn’t have enough room for that title.  Now that I spilled the beans, no one caught the faux pas.  I wanted to share with my students (so I wouldn’t get repeated phone calls) what they needed to know. I was educating them.


My second book, Dust unto Shadow was to tell the world (and to honor my Mother) what it was like to live in a foreign country literally “embedded” with a foreign pastime, guns and violence.  How it was different from being a tourist who can always go back home.  In spite of her family’s apparent assimilation, they kept running into bad situations and reactions they didn’t understand. It was filled with drama which made it entertaining, but on another level it was also educational.  I took on her voice and told the story from her point of view.  Now relatives tell me how they want to give me their version.  No thank you. After all, it was her life and my book.


As for my third book, Echoes Amongst Us, (no one has questioned that amongst implies three and who are the other two?)  I mention the other two at the conclusion, so if you are curious, you’ll have to purchase a copy.  Writers need inspiration and I found mine when as an American I lived in Berlin, Germany where I observed and analyzed specific Prussian cultural differences from friendship to telephone behavior. I vowed that if I wrote my own book I’d have some fun with it. But I also wanted my book to be personal, and informative. And because of where I was in my life it is enlightening with love at its root.  But you have to be awake to observe that.  And most aren’t, they only believe in their minds and bodies never giving a second thought to their soul until they are ready to die. A life poorly lived.


I could have spoken for hours about the thought process that went into those three books but time was whizzing by. I decided instead to offer a few generalizations about writing and writers.

You never get used to how hard writing is, actually. After three nonfiction books, I have my sights on what’s next. I will research to find out about what I didn’t know about political tensions since the story may take place before my birth.  I’m sure it will be a magnificent learning experience. I can only hope that my readers will enjoy the result of all the hard work that goes into it.


But I digress: what and how does this writer think right now? That it’s time to finish this post and give neophytes a little advice: write your heart out if that’s your wish. Don’t think of publication. Just think of what you’ve got to say, what’s important to get out of your system. Honor your craft. Always do your very best. The rest will take care of itself.
classical music journalism opera reviews the arts writers