My Obsession with Big Cats, continued, by Elizabeth Kay

I am going to be totally self-indulgent with this, as I had a number of comments about the last post, and I’ve recently been a winner in the Exodus travel writing blog competition. I had my first piece of travel writing published in a local newspaper when I was nineteen. I’d been on a Land Rover trip to Morocco, an unusual destination in 1968, and we’d camped in a wadi – just the way my geography teacher had told me you shouldn’t – and after innocently watching a spectacular lightning display in the Atlas mountains and not putting two and two together it flooded in the middle of the night. I didn’t speak up when the campsite was first suggested; when you’re nineteen you always assume your elders know better. We were all okay, but only just, and I’ve carried on camping in dodgy places 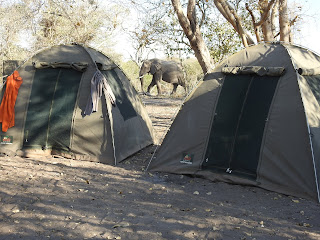 ever since. It’s addictive.


So. Wild camping in Botswana. Wow. It was one of the most exciting holidays I’ve ever had, and it was a 70th birthday present from husband Bob. He couldn’t think what to get me, and the only thing that I wanted more than anything was a leopard sighting in the wild. We saw such amazing things, and had some scary experiences.


The first part of the holiday was a visit to the Okavango Delta, where we were taken to our campsite in mokoros – canoes poled by local people, much like punts on the Cam. They carry two passengers, and a small amount of luggage, so our main bags were left at the previous campsite. It’s relaxing and dreamy and lovely. Until a hippo charges the canoe behind you, and tips all three passengers out, bites the canoe and sinks it. The event was unprecedented, and the guides were as shocked as the three women who ended up in the water, hiding in the reeds in case the hippo came back. The guide reckoned it was a young one, teenage I suppose, which had been feeding on the bank and was completely hidden in the vegetation. It found itself separated from the others, and panicked. No one was hurt, although very shocked, and two cameras and one phone were ruined. The boat was retrieved by the brave locals. The incident was no one’s fault, and very unlucky. I have a little smile every time I think of the insurance company dealing with the claim.

We saw four leopards all told, countless lions, two cheetahs behaving very affectionately towards one another and a serval. We spotted a half-grown leopard cub on some rocks, and then, a little later, the mother came through the bushes with her kill - an African wildcat. Our guide had never seen this particular prey before. I do realise some people may find the photo upsetting, as wildcats do look very similar to those at home. We also saw one in a tree, so that was just about every photo call we wanted! 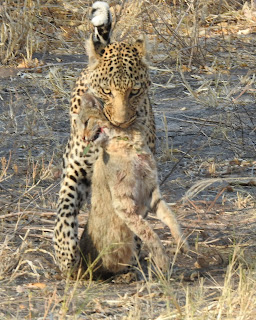 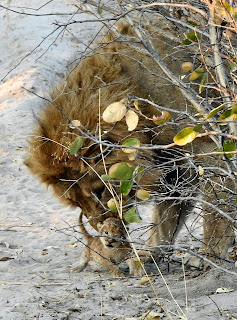 We also saw a mother lion head off to hunt - she was obviously feeding cubs, as she was heavy with milk. Then a male lion started sniffing the air very thoroughly, and  eventually went over to a bush where a very small cub had been left. We were all terrified he would kill it, but he was the father. Quite a young lion, and it must have been his first babysitting session as the cub was only three weeks old. It wanted to cross the road, and he kept trying to gently nose it back to the bush. It wasn't having it, though, and ended up in the middle of the track yowling for mum. Two other male lions were in attendance as well, but they didn't attack it either and our guide thinks they were all brothers, there to protect the cub. 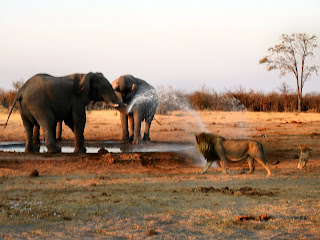 The incident that was the most amusing was at a waterhole. Botswana is going through a drought year, and water is in short supply. Two elephants had taken charge of this one, and a group of five lions decided to have a drink. The elephants didn't agree, and kept chasing them off. The lions called for reinforcements, until there were ten of them, so the elephants did the same and a third one turned up. They took it in turned to chase individual lions, but the funniest part was when they squirted them with water. I wish the picture were sharper, but I was lucky to get it at all.
Our guide was terrific. He knew how the animals behaved, and could predict what they would do next and get us in the best position for a photograph. Because we were wild camping we had to stay in our tents at night. I took my camera trap with me, so I could see that we had honey badgers and hyenas round the tents during the night. We could hear lions roaring nearby, and elephants trumpeting. The pictures aren't very good, because it was in night mode, but enough to see what was outside!
For those of you who are considering travel writing, remember it’s not just ticking off animals – it’s their behaviour that grabs the attention. And the same is true of the people you meet – it’s the ways in which they different from us that are important. Happy travels! 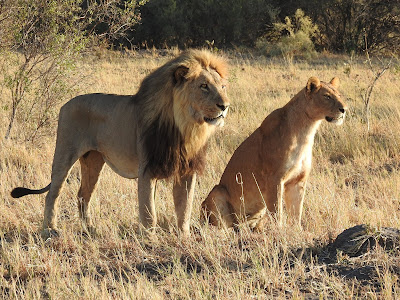 Umberto Tosi said…
Wow! Thank you for your vivid account of this fabulous big cat visit - so rare. This is truely the way to see and appreciate these maginificent creatures, in contrast to those Trumpian creeps whose rifles advertise the smallness of their private parts and public minds.
17 September 2019 at 13:07