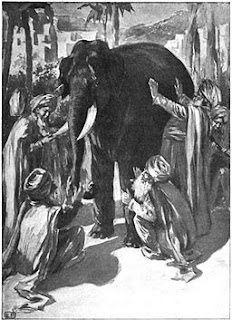 You've probably come across the parable of the blind men and the elephant, which is thought to have originated in India although there are several different versions. Basically, a group of blind men come across an elephant, of which they have no previous knowledge, and each one encounters a different part of the creature. The blind man who feels a sharp tusk forms a completely different view of an elephant from the man who feels one of its legs, and since none of them can agree what it looks like they eventually come to blows.

After my last month's post about Wi-Fi, I was going to blind you with more figures about 5G and the radiation levels in my town, but since my creativity has happily returned after disabling my home Wi-Fi and staying out of high-intensity signal areas as much as possible, here's a bang-up-to-date 5G version of the elephant parable, which I'm calling 'The Blind Girls and the Unicorn'. (No sexism intended - just balancing out the men of the original.)

The first girl, who feels the sharp point of the unicorn's horn, screams and says, "Help! It's a monster with a long twisty spear come to kill us all... RUN FOR THE HILLS!"

The second girl, who feels one of the unicorn's legs, says: "Don't be silly, it's not a monster. It's got hooves and legs just like my trusty little pony, which I carry in my pocket. They feel slimmer and a bit warmer, though, so it'll probably be faster.... I WANT ONE!"

The third girl, who touches the unicorn's soft, curly tail, says, "I agree it's not a monster. I don't know if it's much like a pony, but it feels soft and fluffy like my comfort blanket, which gives me sweet dreams and makes me feel more secure in this crazy world. I'm taking it to bed with me..."

The fourth girl, who feels the unicorn's large, all-seeing eye says, "Wait a minute - this creature can SEE. It'll be watching us wherever we are, and making sure we behave ourselves. It tells me it's just keeping an eye on the bad guys so we've nothing to fear if we're good, but I'm not always good..."

The fifth girl, who can feel the unicorn's rainbow magic even before she touches it, says, "It feels very powerful to me, and its magic is making me a bit dizzy. Better not touch it at all... stay a safe distance away in case it zaps you."

The sixth girl feels the hatch in the unicorn's belly (it's a Trojan unicorn) and says: "You're all wrong, you know. This 5G unicorn is not a monster, or an upgraded pony, or a comfort blanket, or a magic creature that might zap you in your bed... it's a DOOR! We'd best check what's inside to make sure it's safe before we drag it into our town."

"And how are we supposed to do that?" scoffed the second girl (who can't wait to get her hands on a fast little unicorn to replace her slow old pony, and is getting rather impatient with all this arguing). "We're blind, and the door is locked. We can't just peer through the keyhole, can we?"

"I don't want to know what's inside," says the third girl (who is getting rather anxious about all these different parts of the unicorn). "I don't understand all that technical stuff inside, anyway, and I'm sure the unicorn is smarter than me. Besides, I asked the people who gave me my old comfort blanket, and they said there's nothing to worry my little head over, it's perfectly safe, and very soon now I'll get a free upgrade."

"Free? Really?" says the fourth girl, the one that was worried about the unicorn's all-seeing eye. "Maybe I'll get one after all... I can always put it to sleep when I want some privacy..."

But, of course, nobody can switch off a 5G unicorn, because it's too powerful and a whole lot smarter than everyone in the world, smarter even than those who are not blind, because it thinks faster than we can. Running for the hills with the first girl is not going to help because the unicorn breeders are already there breeding yet more unicorns, and soon it will be impossible to stay a safe distance away because unicorns are greedy creatures and need lots of smart stuff to feed on, which you'll want to purchase for them and keep in your home, because who can refuse a unicorn with powerful rainbow magic, a fluffy tail that gives us sweet dreams, and a large all-seeing eye? Its cute little foals will soon be in your road, too, and though they be small (and possibly disguised as a burglar alarm), each one is just as powerful as a 5G unicorn and capable of sending their rainbow magic through the walls and windows of your home.

If you've managed to read this far, you're probably not one of the blind girls from my story. So what exactly is a 5G unicorn to you?

In the words of a local graffiti artist under the railway bridge: "OPEN UR EYES" (while you still have them), and let's at least check there is no threat hiding inside before we welcome this fabulous 5G creature into our very homes.

If you haven't time to follow all the links, the UK's current safety advice for non-ionizing (wireless and microwave) radiation is based on the ICNIRP's outdated 1998 guidelines that apparently were set after testing a single device on a plastic head the size of an average man's. These guidelines claim that 5G is safe because it will not cook you (or not cook the average male's head) within six minutes of exposure. Most European countries now accept that wireless radiation also has non-thermal biological effects on humans, animals, insects and plants, and have set appropriate safety levels much lower than the old ICNIRP levels. Based on thousands of independent studies, some scientists and medical professionals think these should be set even lower... for proposed precautionary levels, see bioinitiative.org.


*
Katherine Roberts writes fantasy and historical fiction for young (and older) readers. And if you still think unicorns are all harmless rainbow magic and fluffy, soft-horned foals suitable for tucking into your child's bed, you might like her unicorn story SPELLFALL available in both paperback and ebook. 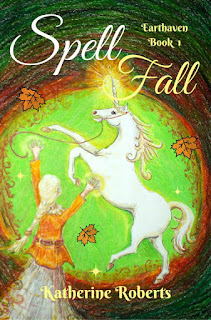 Posted by Katherine Roberts at 00:00

You make me so happy I'll never afford 5G, but will continue to imagine unicorns, Katherine!

It won't matter if we buy anything with 5G or not, Umberto. We'll all still get radiated by the 5G grid of satellites, masts, and so-called 'small cell' transmitters (the unicorn foals in my story), that are going up all over the place to push the signal into everyone's homes, whether we want it or not. This technology has not been proven safe and has recently been declared uninsurable by Lloyds of London, which is particularly worrying for the self employed, since if it makes us too sick to work then nobody pays out. And soon we won't be able to buy household goods that are not 'smart'... apparently there will even be smart mirrors, connected to the 5G grid, that will tell us if us have a skin condition or have developed another wrinkle (which reminds me of another fairytale...)