Bits and pieces from the ragbag by Sandra Horn


Considerably to my surprise, I’ve just reached my ¾ century. How did I get here, I ask myself, and so fast? What about all that stuff that happened in between my arrival in Melksham towards the end of WW2 and now? Looking back at the in-between is like coming across a patchwork of bits and pieces, with holes in. A ragbag. Here are some verses from the early bits of it:

First:
I am learning to knit on my Great-gran’s knee
In the cushions of her lap.
Needles click, wool spools,
‘In, round, through, jump him off!’ she croons.
With a twitch of her hand, a twitch of her knee,
The stitch and I take flight.
The stitch drops into the knitted wool,
I fall into her downy warmth.

And then:
Hop-picking time; we all turned out
Bar those that were ailing and the working men.
Smallest of all, I had a special bin;
I picked the papery flowers into Great-grandad’s hat.
Long years had shaped it to his head; it was brimful of him,
Seasoned by weather, time and garden bonfires.
I filled it full, placing them one by one
With solemn care, counting them in.
I was his helpmeet, sunshine, and his little maid.
‘Careful now!’ he warned the Talleyman -
‘Some special hops in there!  Don’t let ‘em squash.’
The hops were bushel-measured, tipped into pokes, taken to the oast,
‘For to be dried,’ he said, ‘and make the beer taste good.
‘Course, those’ll make a very special brew.’ 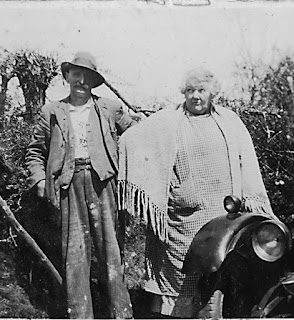 And after that came:

Daily, I travelled on the bus
the switchback way across the Weald.
Up over the Beacon, down Washingstool Hill,
past hop-gardens, sheep-fields and woods,
to traffic and houses and school.
I travelled from colourful home-knitted jumpers
to bought-from-the-shop in plain navy-blue;
from evenings of telly or rackety street games,
from star-gazing, idling, to homework alone.
From hops-blackened hands to French and Deportment,
Music and Botany, games played by rules,
lessons to temper my rough Sussex burr.
From safe and familiar to worlds yet unknown;
enticing, exciting.  How far would it take me,
the Southdowns school bus? 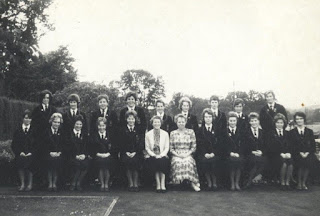 
We were in London LONDON!
You were in the centre,
I was way out west,
but LONDON nonetheless!
Trying our wings...
cooking new things
from our mothers’ staples -
(apple crumble, shepherds pie)
to daring LONDON food.
It was your turn.
‘What ‘s this?’ I asked
this pale green oval something on a dish.
‘Avocado pear,’ you said with pride.
(Oh, London, LONDON!)
Wary, I took a little piece,
not expecting to enjoy -
but cool smooth buttery
melting, delicious, filled my mouth,
like nothing I had ever known
Exotic. Strange.
Oh, LONDON!

And now, taking a great leap over all the significant events of the 50-odd years since:

The ferry chugs unhurried through the bay.
To our left, the shingle bank;
To the right, a row of tethered boats,
Skugga, Sylphe, Sea Eagle, Seren Wen,
Tug at their moorings in the salty wind.

Kite surfer skims the shallow sea,
Comes alongside, keeps pace with us,
Then makes a half-turn, lifts –
And flies. Over the ferry,
Over Sea Eagle, Skugga, Sylphe and Seren Wen.

Oh, I am past my threescore years and ten,
Slack-fleshed, stiff-jointed,
Needing to feel my feet flat on the ground;
But now I’m up there with the surfer – past him –
Riding the wind on strong and tireless arms.

The ferry chugs below.
Skugga and Sylphe, Sea Eagle, Seren Wen
Clatter and tug and fret;
Sea-bound. Earth-bound, while I surf the sky.

This is weird. This blog was going to be about the books on my bookshelf, and in particular those written by ‘Writers’ – our small group of people who met about 30 years ago, wanting to write, wanting to learn. I had intended to write about our output, but the autobiographical verses suddenly intervened so insistently, I don’t know why – the child being the mother of the woman, or something like that? I expect it’s me age, Guv, but I’ll leave them as they are now and save the books for another time.
early lfe London ragbag school verses

Bill Kirton said…
What Susan said. And I envy you your facility with the form, Sandra. The concision of poetry has always escaped me, but the way you capture things beyond the words you use (or, rather, inject meanings they don't carry on their surface) is a delight. Thank you, young lady.
20 September 2019 at 13:21

Ann Turnbull said…
Thanks for these poems, Sandra. Lovely post. I too spent my childhood in Kent, but we lived in the urban bit that is now part of Greater London. I'm trying to write poetry too, and also gathering my fragments of memory together for some sort of autobiography.
20 September 2019 at 14:06

Umberto Tosi said…
What a delightful poetic change of pace post, saying so much, with humor and imagery with your lyric verses!
21 September 2019 at 07:09