As I write this, at about lunchtime on Sunday, I'm trying to listen to part of an online conference run by a Facebook group I'm part of. On Friday I took in an online discussion on publishing at Edinburgh Book Festival. This morning, between washing my hair and having lunch, I tuned into a family history conference on Zoom. A hot tip from this one, by the way,  is not to try to style your hair while wearing headphones! Tomorrow I'll spend much of the day watching a folk festival online. One of my friends has alerted me more than once to the availability of various theatre productions online too, although I haven't got round to watching any of those yet, having spent much of my down-time viewing old television series I didn't get round to watching the first time round.

There does seem to have been a glut of online conferences and festivals just this weekend, which is a bank holiday weekend in much of the UK. But at least there aren't any work meetings at weekends, so I haven't yet completely glazed over.

Although I'm a regular theatre-goer in normal times, and usually take out a subscription to the local theatre season, which runs from September to May, I can see certain advantages in attending online events instead of real life ones. You don't have to go anywhere, for a start. This gives you more time, in my case, to fritter away the time you would have spent travelling to the venue in pointless scrolling through Twitter and feeding cats.

I do try to ring-fence the time I plan to spend on these online events, which at least seem more worthwhile than the pointless scrolling. This brings me to one of the big disadvantages with online events as opposed to real-life ones. Once you get into the theatre or concert-hall auditorium, or if the event is part of the Edinburgh Book Festival, the tent, you've committed yourself to concentrating on the event. There may be moments when the person next to you shuffles about in a particularly annoying way, or when you'd quite like to ask a question of one of the speakers at a Book Festival session but you can't get a word in edgewise because some other questioner is rambling on with something that isn't even a question, but generally it's easier to keep your mind on the actual content of the event than it is to get up and walk out.

It's a whole other story if you're watching at home. The online Book Festival event was an extreme example of this. Soon after I began to watch it, having managed to navigate to Zoom and get the sound working on my laptop, I became conscious that something was unfolding just outside the conservatory windows. There is a long story behind this, which I don't have time to go into here, but essentially I've got myself into a long-running but mostly silent battle with the next-door neighbours over the fence that divides our gardens from each other.

A couple of panels in the fence had blown down in a gale over last winter, but for reasons they had already expressed before this, to do with a large holly bush quite close to the boundary, the neighbours obviously blamed me for it, because they didn't do anything about replacing it. I also didn't do anything because they were the ones who had put up this taller fence a while ago and in my view it was up to them to put it back if they still wanted it.

This situation continued throughout lockdown, and I didn't really even want to go out in the garden in case I had to speak to them about it, partly because I was worried things might get nasty. Instead it turned into a kind of garden poker game, with all of us keeping straight faces and not giving anything away. Then I had some other work done in our garden, including getting rid of the disputed holly bush and cutting back some of the larger shrubs along the boundary, which cost a small fortune of course, and I thought I would wait until I had some spare money and then quietly arrange for the fence to be done too. 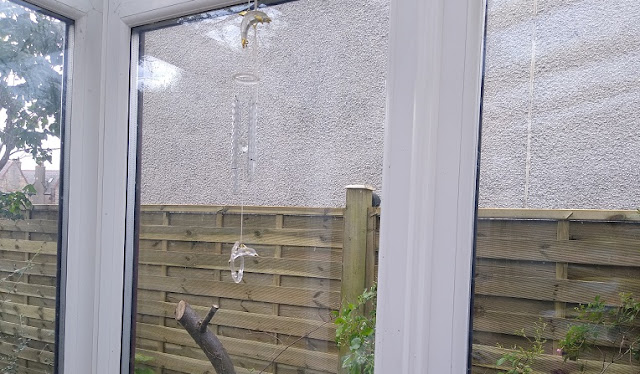 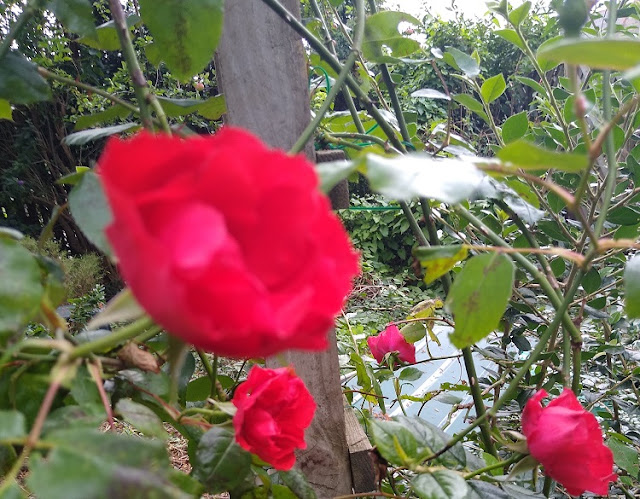 So it was rather a surprise when someone began to dismantle what was left of the fence, rearrange the panels and add some new ones, and put it all back together while I was trying to concentrate on the online Book Festival event. My mind jumped away into the future, to a time when I would be able to go into the garden again without even seeing the neighbours, so that at last I would be able to get rid of  the encroaching wild vine that is spreading all over the forsythia at the end of the garden, and excavate the middle of the area to find the stepping stones I know I put there in the days when I was capable of lifting paving slabs.

Of course in our household there is always the danger of cat attack, carers asking silly questions or letting one of the cats escape, and unexpected family visits, so I can't entirely blame the neighbours for causing my mind to wander! If it hadn't been them, it would probably have been something else.

Griselda Heppel said…
Loved this! I was totally caught up in Fencegate, which sounded infinitely more exciting than anything mediated through Zoom. Which is exactly the problem you were addressing. I have a formal meeting tomorrow which I'm attending on Zoom and I'm already trying to psych myself up to 'being' there as wholeheartedly as possible, rather than letting my mind wander and start thinking about lunch. I hear that people who've carried on their jobs at home with several online meetings a day are utterly exhausted and I'm not surprised.
6 September 2020 at 18:47

Fences do make for great neighbours but only if they're
blocked out, heh... I'm glad yours got fixed. We finally have great neighbours now where there was once an awful woman. After more than 13 years living next to her, she finally died. And no, we didn't kill her!

I do a workout 6 days a week using Zoom, but it isn't the same as going into a studio. Hopefully, life resumes some kind of normal. I much prefer being annoyed at people in person. ;)

Hope you're keeping well and able to go into your garden again!
eden

Cecilia Peartree said…
I find online meetings very tiring - I think in most cases I try too hard to concentrate at work meetings and committee meetings - yesterday evening I had a Zoom meeting for my local committee after a day of working from home, and I certainly did sleep well afterwards.
10 September 2020 at 18:26