What do you do with old photographs: Misha Herwin 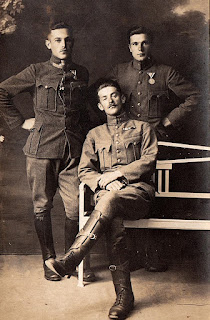 Time after time, when people are asked what they would save from a house fire, they say their family photos. Which, when you consider how rarely we look at them, seems odd. And yet in another way this makes perfect sense.

Those photos are more than pictures. They are memories. Mostly happy ones too. The bad times are rarely, if ever captured on film.

They remind us of who we were, what we looked like and what we did. And they make us smile.

They also link the generations. The grandchildren can see what parents and grandparents looked like when they were young and get a glimpse of what life was like back there in the dark ages. A photograph can also be a window into history. The only one I have of my grandfather is as a young man in uniform when he fought for Austria Hungary in WWW1.

I’ve spent the afternoon clearing out a box of old photographs. They are now sorted into categories and ready to be put into albums. An old fashioned way of storing them, but what else do you do?

Some I’ve scanned and will save on my hard drive, others might be put into frames, but there is not enough space on the shelves for most and those in my pictures folder won’t get looked at very often.

So there they will be, volumes and volumes, from when I was a baby onwards. There are pictures of the holidays we had, houses we lived in and animals we owned, or in the case of the cats, deigned to share our home.

It’s a visual record of my life and of my children’s child and young adulthood.

And one or two which are actually quite good photographs in their own right.

Eden Baylee said…
Hi Misha, Thanks for a lovely post, and that's a great picture. Love the old sepia tones... they hark to another era, really.

I was fortunate that a cousin took many pictures of me and my siblings and family as we grew up. My mom made many albums of them and it's nice to sit and flip through the pages when I go home.

Nowadays, it's just too easy to take digital pics on our phones, and from there, they will probably stay until deleted. Too often, it's 'taking the picture' that is more important than 'looking at it' afterward.

Sounds like you have a catalogue of your life in pictures, and that is a precious link to your memories. :)

Peter Leyland said…
Photographs are such great memories Misha, especially sepia ones. A group of friends took one in Sefton Park Liverpool in 1971 and we repeated it 47 years later! I would save this above most others.
11 September 2020 at 10:55

Bill Kirton said…
This is a very timely post, Misha. I have 5 siblings and, recently, thanks to the advent of Zoom-type connections, we've managed a weekly 'meeting' - which is great for me because they're all down in England and I'm in Scotland and would never otherwise see them often. But a theme that's recurred frequently when we meet is the nostalgia of our upbringing (I'm the eldest and they're all, but for the 'baby', in their 70s). It's involved a sharing of photos not only of us but of the special place where we lived (The Barbican, in Plymouth) and our long gone friends,relatives and neighbours. They evoke a world which no longer exists except in those old black and whites and our heads. Looking at them is magic.
11 September 2020 at 13:23

Umberto Tosi said…
Old photos convey tangible magic with their memories. It's a pity that this generation is likely to have far fewer to keep that we did, due to so many images taken digitally and rarely printed. Digital images - even high-res - might be sharper, but lack that magic in my estimation. Thanks for your perspectives!
11 September 2020 at 19:59