Eden’s recent discussion of all the different Points Of View a writer can choose when telling a story came at just the right moment for me, having just finished reading a book which pushes this rule to the utmost. And got away with it. Brilliantly, as it happens.

When I started writing children’s books, I saw no reason not to change points of view between characters. How else to follow their different paths if they get split up on their journey, as happens in Ante’s Inferno? I needed an editor to point out that this was Ante’s story from the start, and that abandoning her half way through to get into the heads of the other characters wrecked all narrative tension. Restructuring the story was difficult but of course the editor was right. I learnt my lesson. One day I may be ready to bring off what many writers – Tolkien and C S Lewis among others – do, but not yet. 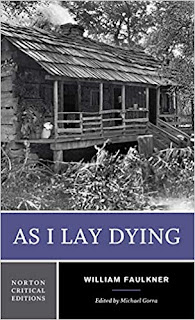 And obviously, changing points of view between characters can only work if you’re writing in the third person; or, if employing multiple first person narrators, you headline each change with the name of the character so the reader knows what’s happening (as Faulkner does in As I Lay Dying, an example Eden gives). Whoever heard of a story being told successfully while swapping back and forth between half a dozen anonymous first person POVs, one limited third person POV and one third person omniscient POV? You’d have to be an exceptionally brilliant writer to bring that off. Maybe even (spoiler alert) a Nobel Laureate. 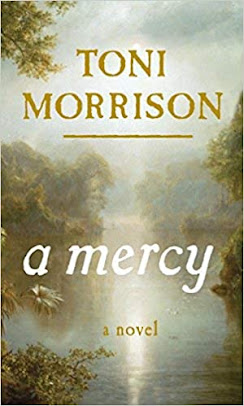 Anyone who’s read the book will recognise by now that I’m talking about Toni Morrison’s A Mercy. I am ashamed to say this is the first of Morrison’s books I’ve read, so I don’t know if this is her standard technique or peculiar to this wonderful, luminous novel set in the harsh environment of settlers in 1690s America. Ostensibly the story is told through the eyes of Florens, a slave girl taken aged eight from her mother in a Catholic southern plantation to join the household of Dutch Protestant Jacob Vaark in the north. Everything that happens in the book and every main character is referenced in Florens’s first, compact, image-laden, bewildering stream of consciousness opening chapter; but it’s not until the story unfolds that the significance of all those haunting images – a corn-husk doll, garden snakes crawling up iron posts, a dog’s profile in the steam of a kettle – is gradually revealed. Meanwhile other female voices break in, adding fragments here and there to build up the picture, interspersed with third person narrative focussing on the males (an interesting division in itself). It doesn’t make for easy reading and for the first 40 pages or so it’s hard to work out what’s going on but the sheer, overpowering beauty of the writing makes this not matter. The effect is like the work of one of those clever television artists who paints a canvas in such a way that it’s not until the final brushstrokes that the whole thing comes together and you can see what the picture is. In A Mercy’s case, not even the title makes sense until the very last chapter, when its full, uncompromising meaning emerges with grim significance.

'Twas ever thus. A genius like Toni Morrison can break every rule in the book, in more ways than we ordinary folk can imagine, to create a work of art that resonates and deepens in your mind long after you’ve finished reading.

For now, I’ll just stick to the one point of view.

Peter Leyland said…
Hi Griselda - I haven’t read A Mercy but really like her other books especially The Bluest Eye. I read As I Lay Dying with a WEA group and although they had requested it they were very ambivalent and it caused lots of discussion about style. I think the most challenging of his is The Sound and the Fury which really does experiment with points of view. You probably know that Benjy’s chapter is a tale told by an idiot and very challenging to read. Glad we didn’t cover that one! Thanks for the blog which I think raises lots of questions for writers.
1 October 2020 at 03:26

Masters like Faulkner, Tolkien, Joyce, Morrison make it seem effortless for the reader when they shift POVs. I'm all for them breaking the rules as they've certainly earned the right to do so. Like you, however, I'm still playing by the rules for now!

A year ago, I watched THE PIECES I AM - the Toni Morrison story. If you're able to find this film, I'd highly recommend it. At the time it released, she was still living. Such a loss for the world, both as a writer and a human being.

I've not read A MERCY but have read SULA and BELOVED years back. Your post reminds me to pick up more of Morrison's books.

Thank you, hope you're well,

Griselda Heppel said…
Many thanks, Peter and Eden. I have to admit that As I Lay Dying is the only book of Faulkner's I've read, apart from a few short stories. We had to do it for A level and I couldn't make head or tail of it. It's only thinking about it years later that I understood a little more what Faulkner was doing. One of my difficulties was that because most of the names didn't sound like names to me - Jewel, Vardaman - it took me a while to work out why the chunks of streams of consciousness had these weird titles. I haven't been tempted to read anymore Faulkner since school! This is why I admired Morrison so much for doing it without even naming the characters, yet - once you get into the rhythm - it's clear who's talking.