This letter requires your urgent attention

Re: John’s Campaign v. Secretary of State for Health and Social Care

1.      We write this letter in accordance with the Pre-Action Protocol for Judicial Review.  [...]

We act for Nicci Gerard and Julia Jones who are the co-founders of John’s Campaign https://johnscampaign.org.uk/#/. John’s campaign was founded in 2014 as an organisation that campaigns for the right of people with dementia to be supported by their family carers. John’s Campaign is generally, and here, advocating on behalf of many individuals who have been affected by the issues raised in this letter and we attach to this letter a sample of case studies collected by John’s Campaign which illustrate the issues being faced by hundreds of thousands of care home residents and their relatives across England.

That's the opening of our 14-page 'pre-action letter' to be delivered to the Departent of Health tioday and this is why I'm going to fail in my blog-writing duties. Nicci and I have had the most heart-wrenching few months with every individual account of people's experiences, separated from those they love who live in care homes, being somehow worse -- more bizarre / arbitrary / distressing / cruel (I didn't think I'd use that word but I do now) than the one before.  The cumulative effect has been hard to bear.

We've tried all the methods of persuasion in our power other than direct action. Many people who are suffering this way would like to go and throw bricks through the Downing Street or Department of Health windows. Scotland has a demonstration planned for next week. Others are struggling with loneliness and depression.

There's so much we could say but we seem to have been saying it for months and will probably continue for a while longer. Matt Hancock has two weeks until Sept 23rd to decide to agree to change his guidance (it doesn't really deserve that word) or we get into the argy bargy of the Judicial Review process . Judicial Review is a very good piece of citizen enablement which this govt would like to end. (I can't imagine why ..!)

So, to start with, for the coming fortnight, all the people who care about this issue need to make a big loud fuss. We also have to crowd fund as we have very good lawyers acting for us but, although they are charging reduced fees,it's not nothing.  With Bertie's help (and Sean and Francis) we've built a Crowd Justice page which will go live later today -- complete with Straight to Camera appeals from Nicci and I.  Here we are -- not looking exactly formidable...

However I think if Matt Hancock could look beyond us he would see thousands of people determined to get change, not just two slightly bedraggled, emotionally exhausted writers.  I hope he will take notice of all those distressed and angry people -- and then take action, PDQ

Griselda Heppel said…
A good friend of mine has just joined your campaign, finding it barbaric that she is only allowed to see her husband in the garden of his care home for one hour per week, with two tables between them and her wearing full anti-COVID protective clothing. She’s not even allowed to bring her own see through plastic mask so that her husband can lip read, which means given his hearing loss, communication between them is extremely difficult and very distressing. This can’t go on. The government must shield care homes from the threat of litigation which is at the root of this cruelty. I can’t see care homes themselves surviving, as in the current situation I would do anything not to place an elderly relation there, NOT because of the risk of COVID but because of the certainty that I would barely see them again and certainly not be able ever to have a natural, warm, loving, communicative relationship again. More power to you and John’s Campaign!
9 September 2020 at 21:43 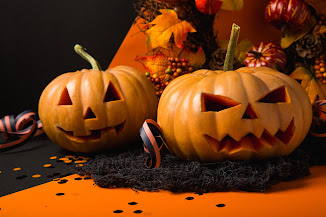 Grinning orange faces... all over till next year.  Photo by Toni Cuenca:  https://www.pexels.com/photo/two-jack-o-lanterns-619424 / Aaand... it’s all over for another year.  Those grinning orange faces, shop window displays full of pointy hats and broomsticks, estate agents advertising haunted shacks (actually, that one’s quite fun), groups of black and orange-clad children roaming the streets for sugar highs – all vanished into thin air on the stroke of midnight last night as the Feast of All Saints began. Much as I love pumpkin soup and pumpkin pie, over the years I greet the arrival of this day with increasing relief. About to be vanquished by the Forces of Good. Photo by Mike Jones: https://www.pexels.com/ photo/ young-girls-in-witch-costumes- covering-faces-with-balloons-9740365/ Why? Well, it’s not for religious reasons. All that dressing up as devils and witches and dancing around on All Hallows’ Eve goes back a long way, signifying the devil’s last grasp at power before being
Read more