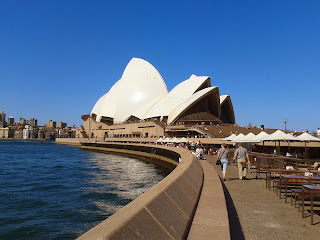 I and my daughter are spending the Christmas holidays with my son and girlfriend. I'm writing this in 36 degree heat which seems rather unfestive, but with amazing views from their penthouse apartment’s terrace on the 29th floor above Hyde Park; yachts galore on the harbour, the Opera House which I can’t admire enough, its white ‘sails’ glittering in front of me, cockatoos, lush flowers, swimming in the rooftop pool under an open sky, all shout ‘summer!’ but then you catch a glimpse of tinsel or a bedecked tree and remember it’s Crimbo. Charing Cross, Paddington, King’s Cross, Hyde Park… the names are British but this is a whole other country, whose inhabitants are obviously and justifiably proud of their beloved ‘brown land’.
Every store, every package, boasts ‘Australian’ or ‘Australian made’, or ‘Australian company’, even bags of lettuce leaves, and mighty US giants like Starbucks have a small presence here compared with Aussie coffee chain Gloria Jean’s.

But now Amazon the mighty have opened their Amazon.com.au store, targeting the Australian dollars which in the book market have been mostly spent on Kobo and ebooks to read thereon from home-grown sites like Booktopia. However, Australians have been buying Kindles and books from Amazon.com, and now it’ll be easier and cheaper. Patriotism has a cost – Australian traditional book outlets have had much higher prices than UK or US equivalents, and Aussies are naturally keen to spend less as prices over here are pretty high for a lot of things. It will also help Australian authors including self-publishers who can now get the 70% royalty, and put right the situation where some Australian authors were available more easily in other countries than their own. But what of UK, US and other authors from outside Australia, how can we make our presence known here?
Below me is the War Memorial, inside which on my last visit six years ago, I saw a newspaper cutting about John Simpson Kirkpatrick from South Shields near my home, and discovered that Australia’s best-loved war hero, who died at Gallipolli rescuing the wounded with the aid of a donkey, was a Tynesider by birth and upbringing, like me. I wrote a play about him, as many of his fellow Tynesiders seemed to know little about this rebellious soldier who never fired a shot and saved lives against all odds and orders, technically a deserter – THE MAN AND THE DONKEY was performed in South Shields to standing ovations, laughter and tears, and I hoped it might get to Australia, especially with the centenary coming up in 2015.

But no Australian companies I/the commissioning theatre have approached have responded, even with personal introductions or recommendations and fab reviews. Perhaps they want to think of Simpson as wholly Australian? Or fair enough, would rather commission Australian writers, though my own background has enabled me to depict his beginnings in authentic language and detail.
There is no obvious prejudice against the Brits or anyone else who has moved here, works here, lives here, but they do generally seem to prefer to buy from within Australian shores. But if Amazon's attractive pricing wins them over,  perhaps we Authors Electric and fellow-writers can come up with some bright new ideas for reaching this new market, as well as India, Japan, Canada… at the moment it's too hot for my northern brain to think clearly though!

2014 is a busy year for me, I have two books due out this year, my crime novel THE OPERATOR in paperback in February (Kindle version is already out) and my new poetry collection in October. My fellow Electric Authors’ books are keeping me reading with admiration and pride to be one of them. So, cheers! from Down Under, here’s hoping it’ll be a good year for writers and readers world-wide!

JO said…
You lucky woman!! I hope you get to see something performed at the Opera House - the acoustics are astonishing!

Chris Longmuir said…
Happy New Year, Valerie. I'm envious as I sit here with my polo-necked woollies on. Enjoy the sunshine. I was interested in your comments about Australia opening up as a new kindle ebook market, and I actually sold 1 ebook in Australia in December! I hope that's a sign of things to come.
1 January 2014 at 10:20

Dennis Hamley said…
We'll be down under as well next week, for two months, though in NZ, not Oz - though we will have a week in Queensland to see Kay's son and family. I too am wondering whether Kindle.au will help us and also whether it applies to NZ as well, which could be a thriving little market. THE MAN AND THE DONKEY looks great but I'm not surprised at the Aussie attitude. The same applies in NZ: for example, hardly any Zanussi and AEG fridges and washing machines: all made by the local firm Fisher and Paykel. And good luck to them. Why can't we do that?
1 January 2014 at 11:48

Lydia Bennet said…
thanks all, for such lovely comments. Dennis I hope you have an amazing time, I'm heading home tomorrow and rather dread the 37 hour journey...
4 January 2014 at 23:53